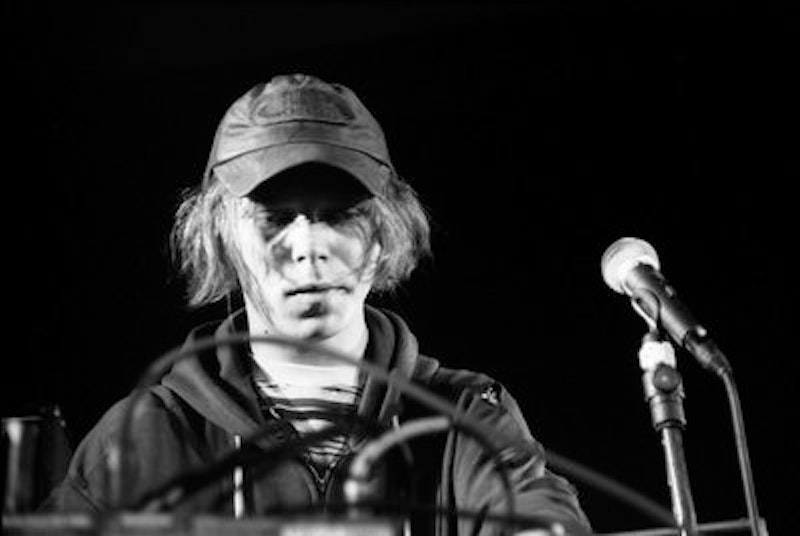 See, I knew it: this was totally going to happen, eventually. Finally, there's an Eric Copeland album out that I adore unreservedly, without the slightest hesitation. It's titled Joke In The Hole (DFA), and it's so, so choice. It's Day-Glo goofy, splattered with hooks somebody Slinkee-carved out of pogo-licious synthesizers and keyboards then gathered together with twine in some kind of mental-ward idea of a bouquet and proffered to you, the derby champion.

Now, all of that probably sounded a little crazy, kind of insane, but look: you need to listen to "Cheap Treat," which like everything else on this release is more or less several ringtones sounding through a broken phone swirled together, bizzaro Neapolitan style. Specifically? One-quarter funkiest xylophone solo ever, one-quarter tropical synthesizer wig out, one-quarter uber-intuitive bass lines you could build a 7-11 on, one-quarter some shit that hasn't even been invented yet.

All that and "Cheap Treat" isn't even the best song on Hole. "Razki" threads a reggae-ready snatch of organ, a warm-up guitar afterthought, and a multitude of variations on three vocal samples through an A.D.D. automatic card-dealing machine. Hearing "Tinkerbell" is like wandering the solar system in the company of a barrel full of Quaaludes and a drummer who always seems to be on the verge of melting. "Babes In The Woods?” An out-of-control lottery machine.

Meanwhile, "Little Tit" comes on as essentially "Alien In A Garbage Dump" as a slurred, abbreviated non-sequitur, but it works because Copeland plays the ganked, timbre-tweaked sample like a Slip 'n’ Slide on a see-saw in light gravity, and plus closer "New Leather Boogie" is right there waiting to quarterback the mood into your re-play. For some reason, I always remember these songs as being voice-free, but the process of listening to review this record and really focusing in brought them out. There's something tricky and masterful about that: they're hidden within the scenery, part and parcel of the rest of the camouflage.

In a lot of ways, Hole is the antithesis of most of what this prolific Black Dice member has done over his last several LPs, EPs, and singles: the music lets its hair down, then doesn't care if it gets tangled or greasy or dirty. Hole—and I know I'm going to regret this choice of words, but here goes—is easy, and I mean that in the sense that Copeland avoids his over tendency to hip-join pop moves and avant weirdness so that the listener winds up with something familiar and out there enough that it's just pleasantly difficult without being something you really, truly want to return to for its own sake.

In other words, it's not highbrow, art gallery inscrutability; it's the trippy poster hanging on a friend's wall at a neighborhood barbeque. There's a reason this article is headlined the way it is; Hole feels distinctly of-a-piece with Jason Urick and Cex's 2011 dub jam-slam Title King. This thing washes over, under, and through you, sliming you with a love so slippery and cantilevered that only a corpse in full rigor could stop itself from inadvertently inventing lame breakdances to its sloping, leviathan strains.

It's Jamiroquai's "Virtual Insanity" video given a spatial remix. It's Paulie Shore incarnate. It's realizing, two or three hours before your barbeque starts, that this album is all you'll really need to get your guests smashed.

Joke In The Hole is out August 6th on DFA.