It's All For Laughs

The unexpected discovery of Mac DeMarco. 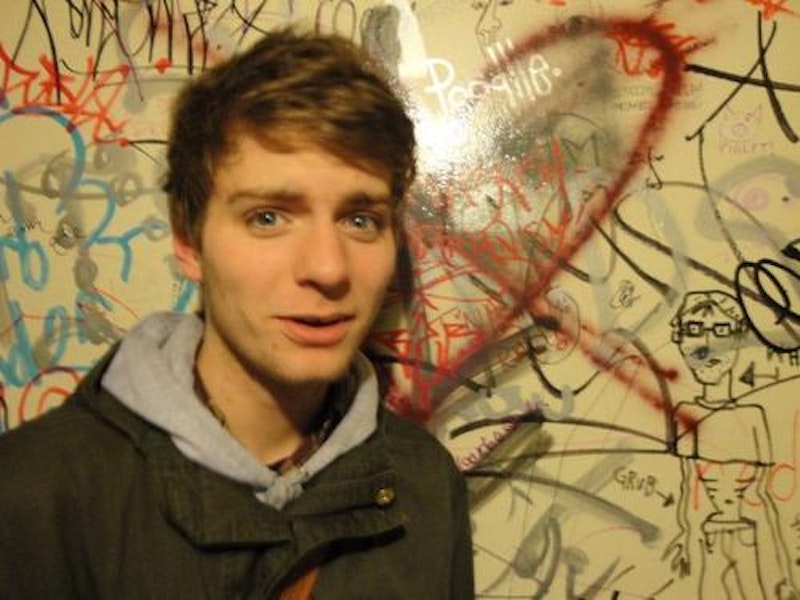 About a month ago I was shooting a video at home when one of my roommates tapped me on the shoulder and handed me earbuds, apropos of nothing. He just implored me to listen. What I heard was engaging and the melody immediate, slyly sad pop flanked by a gorgeous, chiming flanged guitar line, smooth and upfront vocals, and a gauzy texture that cloaked an otherwise tightly constructed song. It was Mac DeMarco’s “My Kind of Woman” from his debut full-length, 2, out now on Captured Tracks. I hadn’t even had an inkling of who this guy was but he happened to be playing upstairs that night, on the B-side of Baltimore’s Copycat at a space called Pearl Harbor. A great feeling—seeing a flyer for a band you love and realizing he’s playing in your building tonight. Flyers aren’t dead!

DeMarco was on tour with Zulu Pearls, a rootsy bluesy middle-of-the-road rock band that would’ve fit perfectly on AOR if it still existed. More exciting were local openers Christopher Nobody & the Nothings, a raucous and noisy post-punk five-piece heavily influenced by Nick Cave, The Birthday Party, and T-Rex. Christopher Nobody, a petite, elegant guy wearing skin-tight leopard skin jeans yelped and yawped and leapt repeatedly from his bandmate’s drum kit, disregarding any instinct for self-preservation and flinging himself wildly at people and monitors hoping not to break a limb. They were so loud I could barely pick up a song, but they got their message across. By now, past midnight, the small warehouse apartment was generously packed with about 75 people waiting to see someone they’d heard (or read) so much about, eager to spy an artist from feet away instead of behind a barricade at the 9:30 Club.

DeMarco’s tunes sound remarkably different from his meticulously constructed recordings. His band opened with “I’m a Man” from Rock & Roll Night Club, an afternoon sun-drenched country rocker resplendent with shimmering chorus harmonies and plenty of colorful, drippy modulation effects on the guitars and a subtle pitch-down of DeMarco’s voice. Live, stripped of his pedal arsenal, the cut was unvarnished and all guitar rawk power, as DeMarco’s vocals went from octavia’d understatement to a glorious raspy growl—like The Allman Brothers with noisier guitar solos in a dirty garage playing for cigarettes and beer. DeMarco and his group are from Vancouver, but their constant goofing (riffing on Tool’s “Schism” while DeMarco changed a string, passing the mic around during their final song and going into a jazz groove before launching back into “My Kind of Woman,” without missing a beat) and upbeat, affable silliness drew everyone in.

DeMarco was all grins as he got recognition claps on “Ode to Viceroy” and “Baby’s Wearing Blue Jeans,” as it’s likely this is the first tour the 22-year-old has played in cities where he already has fans that know his stuff. It’s something every artist dreams of from the time they pick up a guitar, and the gratitude radiated from DeMarco all night. Listening to his fantastic debut 2, it’s pretty hard to make the connection to the crunchy and shambling live band I saw. Which is great: DeMarco’s two records are delicately constructed and crammed to the gills with overdubs, extra parts, and a vibrantly colorful vibe that you can sink into and find new things many listens in. Praised by the press and buoyed by the ensuing attention, DeMarco still doesn’t appear to take anything too seriously, and he’ll win in the end because of it.