Double Nickels on the Brians 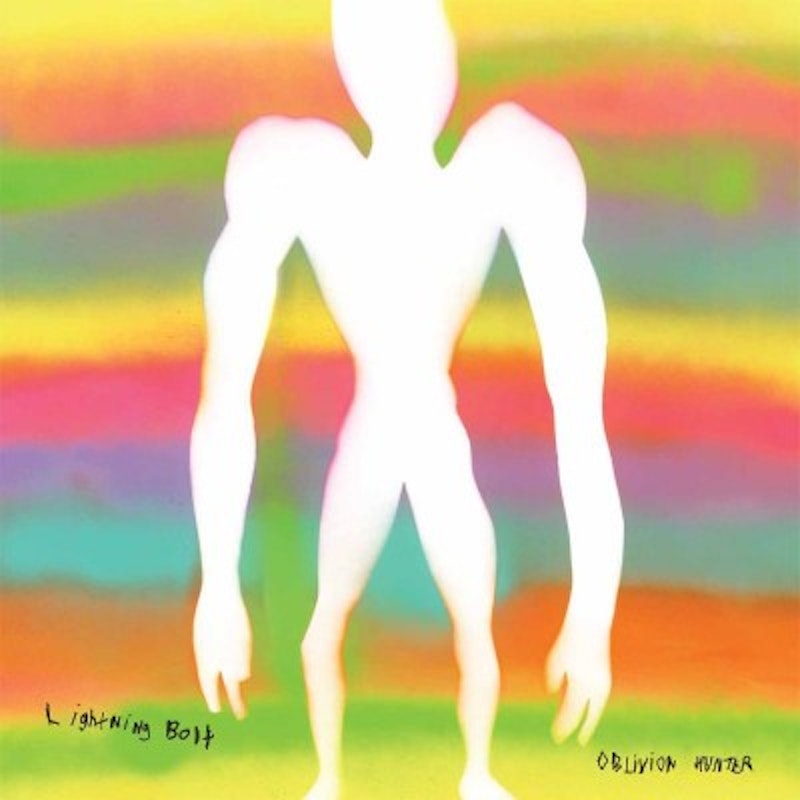 Hi everyone, Lightning Bolt just got back from our 32 show in 34 day US tour and we would really like to thank everyone who came out and supported our ridiculous ventures. See you next time! Now we're holing up to try and record some of this "music" and regrow the parts of our brains that tour atrophies. Thanks again.

I’ve spent a great deal of time, this year, thinking about Lightning Bolt and the whys and wherefores of the Rhode Island duo’s artistic peaks and valleys. In this context—i.e. of two men who have been friends and bandmates for a decade-plus and share some degree of collaborative telepathy—what counts as “calculated” and what can be thought of as “spontaneous”? When and how does practice-space wood shedding trump over-studied attempts at “serious, album-worthy art”?

Circumstances have precluded me from catching Chippendale and bassist Brian Gibson’s act up close and personal, and I’m not a fly on the ceiling of their tour van, so the logistic leaps that exist between conceptual nucleus and commercial product are a mystery. What I do know is that—with the arguable exception of 2009’s Melvins jam-esque “Colossus”—the past year has witnessed LB’s finest breakneck noise thrash since 2003’s totemic Wonderful Rainbow: “I Found A Ring In My Ear,” which surfaced as a Bandcamp “name-your-price” jam in January, and the new-ish, Load Records-enabled Oblivion Hunter. (Do we want to lump “20” in with these? Yeah, sure, let’s.)

What’s significant: this new shit consists of outtakes and extras the Brians excavated from what I’m guessing is a formidable trove of practice session tapes. What this suggests: that, in an almost sci-fi twist, the Brians’ mojos of previous years made the semi-fatal mistake of second-guessing which songs were prime rib and which were kibble, and the Brians’ 2012 mojo is well-served by now-retrospective triple-guessing. There must be something key about rehearsal situations that frees up the Bolt in terms of melodics and dynamics. Witness, on Hunter, the blurred fingerings, hyper-bungee bounce, and rebel-yell velocity of “Salamander” and how “King Candy” translates claustrophobia into enema-entreaty thrills. Gibson tosses Chippendale a storming, mangled jumble of riffs, which the pair proceeds to air punch into the breathless, wind-sprint wonder that is “Oblivion Balloon.” “Baron Wasteland” gloms onto blinding wavelength screen at the expense of that good ‘ol bass vs. drums Cookie Monster crunch. Further afield than “I Found A Ring In My Ear,” “World Wobbly Wide” takes it upon itself to deconstruct what a Lightning Bolt song can be, its high-voltage tectonic plates missing more often than they connect, achieving a jazz-metal dissonance that feels unprecedented even as it complements those rare moments when both Brians seem to inhabit the same solar system.

The conventional wisdom surrounding Hunter is more like conventional whining: everybody wants another Hypermagic Mountain. In theory, Mountain was fascinating; in practice it was exhausting in a tail-chasing way. Then, of course, Earthly Delights’ muddied mix made Lightning Bolt sound like it was rocking the underside of a bog. By contrast, Hunter is just what the doctor ordered: a certified lunge of a record where these dudes stopped tormenting one another as to what their next move should be, sealed themselves into a bunker, and wilded the fuck out with no game plan in mind. We can argue about the hooks if you want; most of Hunter’s don’t quite measure up to the best in the band’s catalogue.

But you’ve gotta give me “Fly Fucker Fly,” okay? Because that shit is a must, a canonical gimme almost, a bleating nyah nyah nyah melody welded to a Mike Tyson Punch Out drum clinic and a cresting Icarus-ish vocal from Chippendale, everything happening under just the right level of fuzz, the Valkyrie surge fading way before tedium has a chance to set in. For that song alone, we should all be glad Hunter exists—just as we should wish Lightning Bolt extra super gnarly times, bashed and crashed out within a bunker, straight to four-track or hard-drive, built for planned semi-obsolescence. There’s no reason to believe that they just didn’t cut 2018’s best noise album.