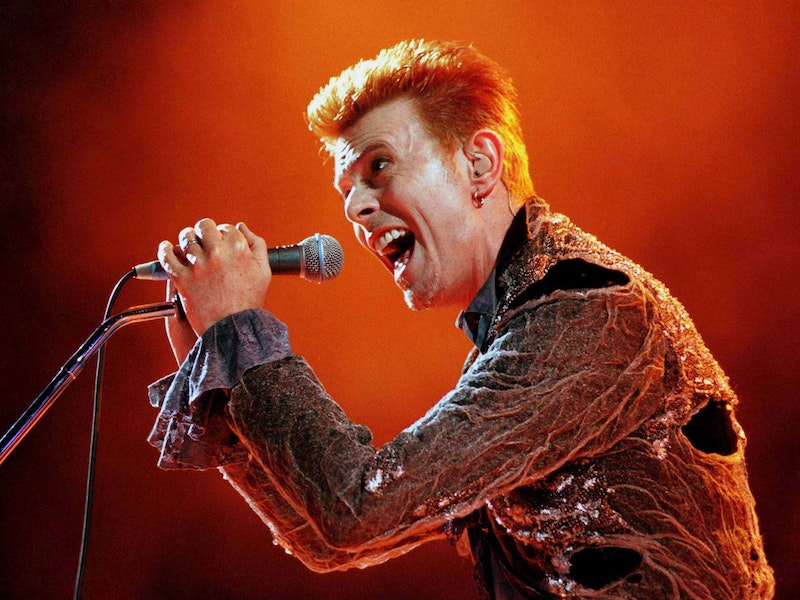 Since David Bowie’s death last January, the music of his that gets the most attention is from the 1970s and '80s. Throughout the '70s, his prolific output was innovative in its theatricality, production, and songwriting. In the '80s, he scored a few huge hits and easily adapted to MTV. His work in the '90s is painfully overlooked, but it’s his continued experimentation in that period that not only kept him from becoming a nostalgia act, but also made him an artistic legend.

At the start of the '90s, Bowie’s career was in a strange phase. His last solo album of the '80s, Never Let Me Down, performed poorly, and his Glass Spider tour received harsh criticism for being uninspired. In that time he met guitarist Reeves Gabrels, and would go on to form Tin Machine. Their eponymous first album was well-received, owing influence to contemporaries like the Pixies and Sonic Youth, but also maintaining a wall of noise descended from Lou Reed’s Metal Machine Music. However, due to a record label going out of business, the second Tin Machine album and subsequent live disc are the only releases in Bowie's catalogue to have fallen out of print.

In 1992, Bowie married the supermodel Iman, and began work on Black Tie White Noise, which was marketed as his comeback album. He’d also achieved consistent sobriety and financial security. It could be argued that for the first time Bowie looked forward by looking back: he enlisted Let’s Dance producer Nile Rodgers and Ziggy Stardust guitarist Mick Ronson. Guest musicians Al B. Sure! and avant-jazz trumpeter Lester Bowie were brought in for a funkier, R&B finish. The songwriting was more personal, with “The Wedding Song” referring to his recent nuptials, and “Jump They Say” to his brother’s suicide. “Jump They Say” was a strange song to be a club hit in the US; the rhythm is disjointed, the scale movement unorthodox, and the punchy chord on “JUMP!” in the chorus is a Dm9, which is more typical to a jazz ensemble piece.

If Black Tie White Noise was Bowie looking to get his groove back, 1993’s Buddha of Suburbia was him gaining a sense of direction. Buddha of Suburbia was a soundtrack album for a BBC TV movie of the same name, where Bowie recorded two new songs, and an ambient, Philip Glass-inspired score, utilizing Middle Eastern-inspired scale movement (a lot of minor harmonics). Bowie played several instruments himself, including baritone and alto sax. The only single released was the mid-tempo title track, which, lyrically, is his most direct embrace of middle class, adolescent angst since “Changes.” The album wasn’t widely released, but upon its 1997 US re-issue, Bowie said it was one of his favorites.

Bowie would reconnect with Brian Eno for 1995’s Outside, which came at a time when the influence of their previous work in Berlin was revived, and proved to be a turning point. The artistic vision of the album was shaped by Bowie and Eno taking a trip to Austria to view the art made by residents of a psychiatric hospital. The music was formed by jam sessions, with Gabrels back on guitar, and more live studio recording than his previous work. The end result is a 75-minute long album, with a rumored 20 hours of outtakes, but it’s an interesting one. The original intent was a high-concept series of albums about the end of the Millennium. It makes sense then that the album plays like a roadmap to the cultural trends of the '90s. The segues that crop up between songs to tell the story are reminiscent of My Life With the Thrill Kill Kult’s creepy sampling mayhem. “The Heart’s Filthy Lesson” and “Hallo Spaceboy” aim to fill in the gap between Nine Inch Nails and White Zombie. But the most radical detour is the references to the Beat era’s resurgence in the bop-inspired “A Small Plot of Land” and “The Motel.”

Bowie’s tour for this album, with Nine Inch Nails as the opening act, is what reinvented him for a new generation. If he was accused of pandering in the '80s, he went the opposite direction here: "How do you commit commercial suicide? Well, you do this: play songs from an album that hasn't been released yet, and complement it with obscure songs from the past that you've never done on stage." In addition to Bowie intentionally challenging the audience, the audience proved to be a challenge themselves. Early in the tour, it was clear that most crowds were turning out for Nine Inch Nails, and left Bowie playing to half-empty stadiums. Changes in the program were made, with Bowie joining the openers for a few songs during their set, and then Nine Inch Nails front man Trent Reznor joining Bowie for a few songs during his. The end result was Bowie appealing to an audience that had written him off as a dinosaur.

Bowie followed his longest album with one of his shortest, Earthling. By the late '90s, rave culture was finally hitting the mainstream in the US. Another collaboration with Gabrels, Earthling embraced electronica. Bowie wasn’t alone in taking this direction, joining U2’s Pop and Madonna’s Ray of Light. Of the three, Madonna—no stranger to electronic dance music—fared the best. But Bowie’s best Earthling songs worked because they struck the right balance layering simple lyrics and atmospheric melodies over complex, polyrhythmic beats. Bowie and Gabrels also aimed to bridge the gap between rock and electronica, with Gabrels’ guitar solos the star of the album; the Reznor collaboration, “I’m Afraid of Americans” was its most enduring single.

Around the same time of Earthling’s release, Bowie participated in something completely different: the sale of Bowie Bonds. Created by investment banker David Pullman, Bowie bonds were asset-backed securities of all royalties from all of his albums prior to 1990. They were sold to Prudential Insurance for a lump sum of $55 million, which Bowie used to buy back his songs from his previous manager, Tony Defries. The bonds had a life span of 10 years, although at the time of their liquidation in 2007, they were rated a notch above junk bonds.

Bowie’s final album of the '90s, Hours, would also prove to be his final collaboration with Gabrels. A strikingly mellow album after the frenetic energy of Earthling, its atmospheric jazz harkened back to The Buddha of Suburbia. He had created the Internet server BowieNet, and Hours was the first complete album legally available for download before its initial release. BowieNet also hosted a lyrics contest, where the winner’s song became the hard-rocking “What's Really Happening?” Bowie and Gabrels wrote Hours at the same time they were working on music for the video game, Omikron: The Nomad Soul, which might be why the album largely feels like a film score. Like Black Tie White Noise, I’d describe Hours as a transitional album, where Bowie finally seems at ease with being one of rock’s elder statesmen.

From there, Bowie would change record labels and get reacquainted with Tony Visconti, who frequently produced him in the '70s. By the time the brilliant and beautiful Heathen came out in 2002, Bowie was clearly maintaining an artistic relevance that many of his early peers couldn’t muster. Bowie would often describe his constant reinventions as inspired by boredom, but I think he was unusually capable of maintaining a childlike curiosity throughout his life. One of the things I love about his work is that he never dumbed it down, he just expected the audience to keep up. If there’s anything to be learned from him, it’s that inspiration is everywhere and creativity doesn’t have an expiration date.