I Never Checked Into the Hotel California

Sad for Glenn Frey’s family, but the Eagles sucked. 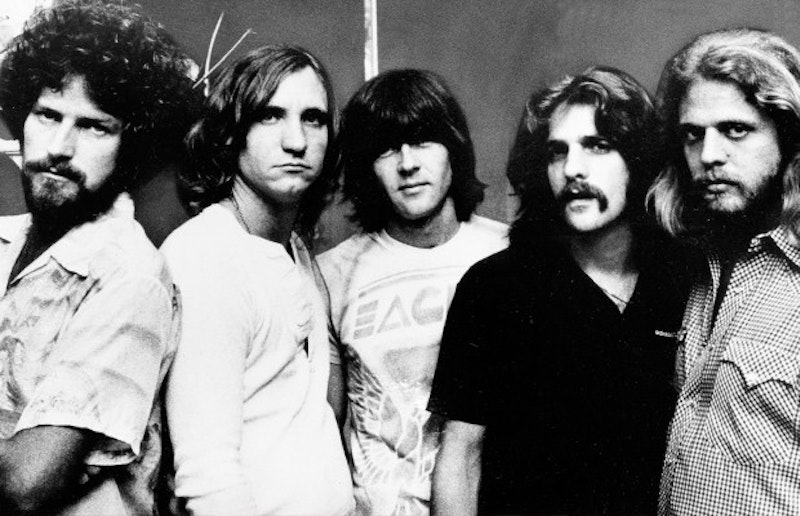 Monday night, around eight o’clock, I clicked on Facebook and the first entry was from my son Nicky, in what appeared to be an extremely odd sharing of a live version of the Eagles’ “New Kid in Town.” I was surprised—that stadium-rock band from the 1970s had rarely come up in conversation between us, and he wasn’t given their recordings as a kid, unlike, say, Dylan, Hank Williams, the Supremes/Four Tops/Temptations/Smokey Robinson or The Beatles—and quickly jotted a response that wasn’t kind to the Eagles, writing, accurately, that their huge success was a direct result of the influence of Buffalo Springfield, the Byrds, and in particular, Gram Parsons, the pioneering country-rocker who died in 1973 at the age of 26. (The Flying Burrito Brothers’ Gilded Palace of Sin, helmed by Parsons and fellow ex-Byrd Chris Hillman, is one of the great 60s albums, and GP’s work with Emmylou Harris is legendary). I also noted that the Eagles personified everything the UK and US punk rockers were rebelling against: bloated, rich, dissolute rock stars who were mucking up the radio.

Scrolling down, I noticed a lot of Eagles-related posts, and realized that founding member Glenn Frey, 67, had died. Initially a touch mortified, so to speak, upon torching Frey’s band at an awkward moment—hated the band, but the man did leave behind a family—it wasn’t long before I felt justified in posting an honest opinion. The 70s are often derided—at least pre-punk/New Wave—by Boomers as a barren musical period, which is downright silly. Yes, Yoko (and money bickering) busted up The Beatles, and the Stones peaked in ’72, but what about David Bowie, Stevie Wonder, Roxy Music, Bruce Springsteen, Steely Dan, Neil Young, Marvin Gaye, Randy Newman, Joni Mitchell and David Bromberg, just for starters? The Eagles didn’t belong in that company.

Naturally, on social media—so soon after Bowie’s death (just after releasing his best record in decades, a heroic effort while dying from cancer, and typical Bowie, making a defining final statement)—people (some legit Eagles fans) were aflutter, noting another loss of an “icon” from their youth, and what in the world is happening with so many music celebrities getting off at the last exit on the cusp of reaching the ranks of the elderly. Truth is, considering the excessive lifestyles of many rock stars—their own business—it’s a wonder more don’t drop off at around 50.

Early on Tuesday morning, I was tipped off to a Washington Post Frey obit by Jack Shafer’s tweet, who took umbrage that Post writer Geoff Edgers said that the Eagles “invented the California country-rock sound.” I give the Eagles credit for making a lot of money and selling millions of records, but they were late to “country-rock,” starting out in 1971, a few years after Dylan’s John Wesley Harding and the Byrds’ Sweetheart of the Rodeo (a commercial flop that was Parsons-infused). And though I did hum along to the band’s first hit, “Take it Easy,” there was little else in their catalog that got my motor running. The Eagles weren’t atrocious in a Yes/ZZ Top/Grand Funk sort of way, but songs like “Already Gone,” “Tequila Sunrise,” “Heartache Tonight,” “Hotel California,” “Witchy Woman” and “Peaceful Easy Feeling” made my skin crawl.

I understand that many of my generation (and their children and grandchildren) are saddened, but the automatic social media funeral when any rock codger passes away strikes me as odd. Christ, when Billy Joel’s time comes, watch out!