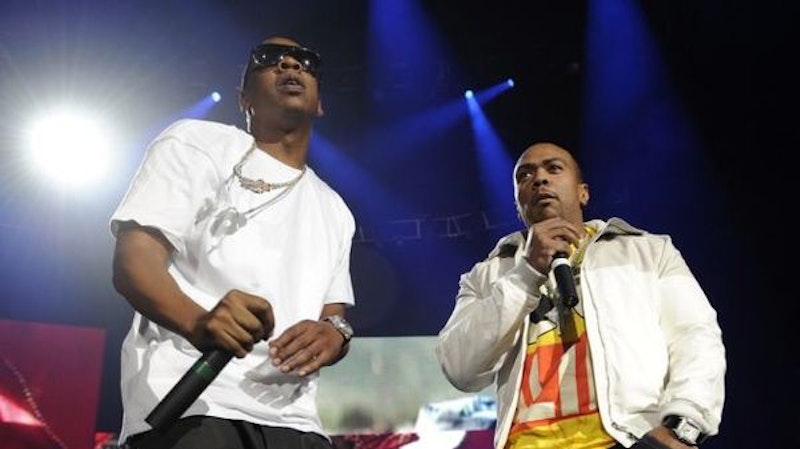 When Jay-Z announced he was releasing a new album, Magna Carta Holy Grail, it seemed somewhat surprising. After a phenomenally successful career marked by multi-platinum albums, international hits, and lucrative business ventures he could have called it quits after The Blueprint, an album which was released 12 years ago.  However, something in the man's hustler DNA deemed that simply wasn't an option. Jay-Z came out of his self-imposed retirement shortly after The Black Album's 2003 release. MCHG is the work of a mogul explaining the immense success of his post-retirement career with part introspection and part gusto.

Timbaland's production on the majority of MCHG is what makes the album work as well as it does. While it seems like an odd proposition for the man behind “Big Pimpin'” to produce an entire album for a minimalist rapper like Jay-Z, the friction is surprisingly minimal. The left field bass line antics of “Picasso Baby” make you wonder how the track is not the de facto soundtrack for art openings across the globe. As Jay-Z adds, not without some derision, “It ain't hard to tell, I'm the new Jean-Michel/Surrounded by Warhol's...” Much like the real life Basquiat, it is impossible to tell whether Jay-Z is playing along with the “in” crowd or trying to pull one over on them. “Tom Ford” furthers the plot: “Spent all my Euros on tuxes and weird clothes/I party with weirdos, Yeah Hov, yeah Hov.” It's a non-sequitur that I'm surprised Kanye West didn't come up with first.

Thankfully MCHG isn't so drunk on its own gallery champagne that it loses track of itself. “FUTW” has the most 90's throwback production of the entire record. It could have been cribbed from the Reasonable Doubt sessions. Jay-Z dips into the nostalgia of that time “1% of a billion is more than these niggas ever seen” seemingly addressing himself as a 26-year-old still trying to work his way out of the streets. Arguably "Heaven" is Timbaland's most direct attempt at stripping away the trademark fussiness of his own production, ditching intricate percussion and world music vinyls for a straightforward use of Adrian Younge's “Reverie,” a nice inclusion where the beat rides for extended moments.

It's easy to categorize MCHG as a throwback album, a reminder of a time when rap felt uncomplicated. Fittingly, it is Jay-Z who, more than any other rapper, harps upon that time, back when he was just an underdog vying for the crown. As he says on “Nickels and Dimes”: “I'm just trying to find common ground/'fore Mr. Belafonte come and chop a nigga down/...You don't know all the shit I do for the homies.” This after Harry Belafonte's recently said Jay-Z was not fulfilling his role as a mentor to the very neighborhoods from which he came. While he clearly takes the comment seriously enough to issue a reply, it is clear that what MCHG is meant to convey, from its offering as an app to owners of Samsung smart phones before its physical release,  is further proof that Jay-Z is not only the most successful black artist in the world but that his work stands on its own merits.