No Age’s rough, minimal phlegm-in-the-face of their apathetic peers. 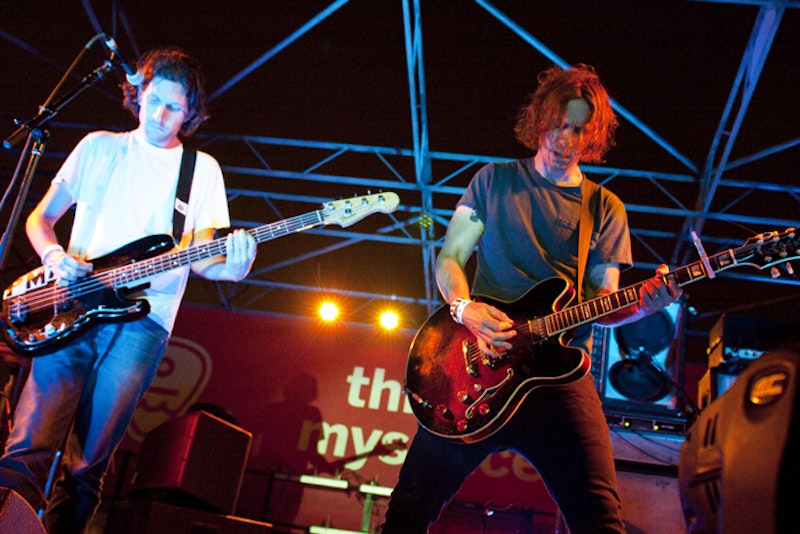 Randy Randall of No Age said in a recent interview: “If my sole purpose in playing music was just to make money, I definitely would not be in a guitar rock band in 2013.” It’s hard to believe anyone would be delusional enough to “get into music” just for the money, like flipping real estate or bonds. But it’s an attitude becoming more common in a culture without peer checking. It’s expected that mainstream music will be vapid and escapist for the most part, but the financial realities of being in a band playing anything below theaters and stadiums have made “selling out” more acceptable, even a non-issue. If there’s nothing to believe in but money, it’s a culture of death.

No Age’s last three records showed fluency in early alt rock and pop punk like Hüsker Dü, the Dickies, and the Urinals, as well as an intuitive use of spacey soundscapes and samples that resembled ambient music but functioned more like different characters or voices. The tape hiccup that starts “Teen Creeps” is the most memorable thing about it. Dean Spunt and Randy Randall’s skill is in the details of their guitar rock, sculpting memorable hooks and song signposts out of noises, chord phrasings, and harmonics. Their new record, An Object, is their most minimal and the songs are all of a piece, lasting less than 30 minutes. This isn’t a band-in-a-room with few overdubs record like Weirdo Rippers or Nouns. The instrumentals are perfected to the last frequency. Each snare hit, distorted squeal, and harmonic pinch sounds precisely where it should be, even though the elements themselves are noisy and unwieldy on the surface.

Opener “No Ground” uses familiar chords and rhythms, placing emphasis on what most people are oblivious too, like the satisfying way the chord loop ends on a bright, chirpy, almost harmonica-like frequency. That becomes the hook. Many people will say An Object is underdeveloped and barren of ideas, but this isn’t some hesher rock band repeating ideas that were old the first time around. Spunt sings in a lower, throaty register, enunciating less precisely and sticking to an almost monotone delivery that isn’t as appealing as his sweet, double-tracked nasally sound on the earlier records. The vocals are really high in the mix too, above complicated guitar and drum collages that sound like they’re coming out of some huge grotesque steampunk one-man-band machine. The melodies are demented and pitch-damaged—“C’mon Stimmung” is startling, the chorus’ siren-like wail harnesses the power of harsh noise music and applies it to pop rock, creating this silver bullet of a song that will drag everyone in and drop their jaws.

Spunt’s lyrics and the title reflect a certain disgust with the way “underground” music culture has ceased to be any different from corporate music, as more and more indie labels become part of a conglomerate. An Object is subversive enough that it might not find a wide audience, but it’s not for lack of trying. No Age is still one of the most intelligent and ethically sound rock bands working today.