A post-Boomer trashes the 1960s icon. 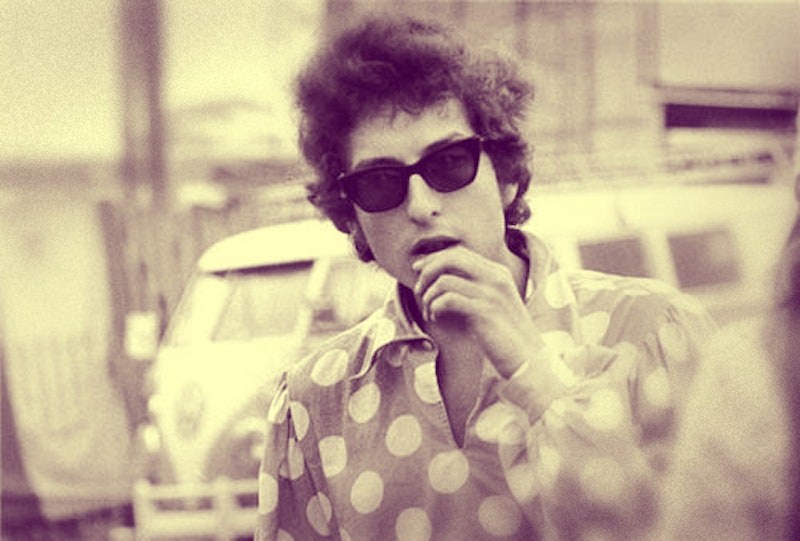 Who is the most overrated musician in the history of popular music? The Eagles? No, Bob Dylan, says my colleague Noah Berlatsky, and he makes a plausible case. I love Dylan, but really only a segment of his enormous catalogue: “the masterworks” (’65-66 run of Bringing It All Back Home, Highway 61 Revisited, and Blonde on Blonde), Self-Portrait, The Basement Tapes, and most of Another Side of and The Freewheelin’. Those are the only records I listen to regularly, whether I’m on a kick of his or not. Everything else from John Wesley Harding to Blood on the Tracks I’ve listened to a couple of dozen times in the past five years. Actually I really enjoyed 2006’s Modern Times, and listened to that one a lot more than Nashville Skyline or Planet Waves. Berlatsky names several artists influenced by Dylan that he says are better: Hendrix (yes), The Beatles (yes), Donovan (no), Joni Mitchell (equal), Johnny Cash (hmm…no), the Velvet Underground (no, but close), Neil Young (equal), Townes Van Zandt (what? no), Sly Stone (equal), and the Minutemen (equal, if D. Boon had lived). Berlatsky cites “the gap between his standing and his sometimes quite good but rarely godlike music,” which I think is a legit opinion, though I’d say sometimes great and amazing instead of a tepid “quite good.” Rarely godlike is dead-on though, but you wouldn’t know it, since Dylan still gets top spots on “ULTIMATE BEST OF ALL TIME” lists every couple years by dying magazines.

Berlatsky writes that Dylan’s strengths “were accompanied by real weaknesses. As a singer, he mimicked the roughness of roots sources without capturing their nuance or power.” I don’t agree with this, but I happen to really like Dylan’s voice. He has a very thin range, like a lot of singers I love—Donald Fagen, Billy Corgan, Lou Reed. You either connect with someone’s singing or not, that’s where the power and nuance comes from. Dylan’s phrasing on the line “But she breaks just like a little girl” in “Just Like a Woman” is an incredibly powerful way of saying, “fuck you” in a very pretty song. “His status as ultimate awesome courageous rock God” is a result of good luck and even better timing: the rock press didn’t even exist before Dylan crashed his motorcycle, and he was just as smart at creating mythology as music.

It’s all arbitrary, just as my picks above are. If youth culture developed and caught on later, it would’ve been someone else’s attributes and genius that are regarded as untouchable today by the people who grew up with him. I mean, check out this indignant response to Noah: “Who the Hell is Noah Berlatsky and Why is He Trashing Bob Dylan?”. Dude, calm down. I think Dylan can take it. Instead of recognizing the “untouchable genius” status of the top-1960s artists as anything other than a happy accident is arrogant on the part of the same people who are quick to talk shit about newer artists that are just as popular as Dylan and mean as much to their fans. Recognize that your teenage years have passed, and that every future generation of kids will have artists they follow and listen to religiously. 1962 is not Year Zero. It’s all preference and fun—people are so insecure. I only agree with half of the groups Berlatsky picked, but do I think he’s an idiot or a contrarian? Of course not. I love Dylan’s music and think he’s cool. But he’s had just as checkered a musical career and personal life as anyone else, and Berlatsky’s taste doesn’t deserve online eye-poking.