Fela wasn't just a musical force, he was a cultural touchstone. 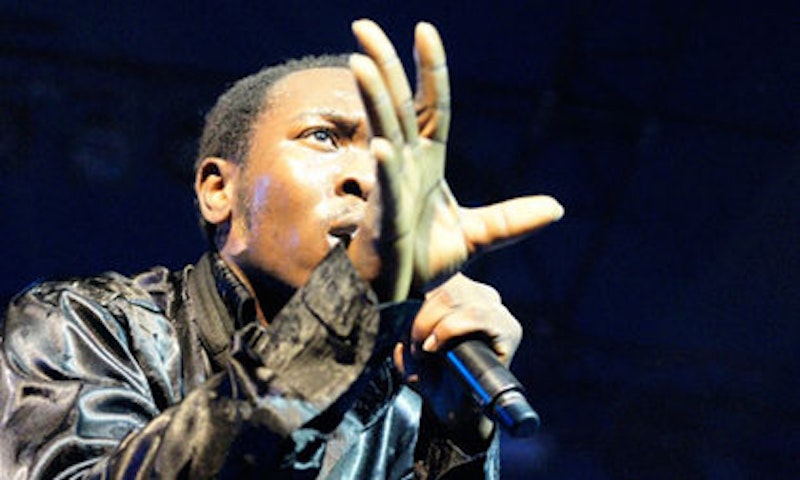 It's almost impossible to talk about Seun Kuti without referencing his father Fela, one of the giants of Nigerian music, world music, jazz, funk, Afrobeat, and pretty much any other kind of soul or rock. Fela is known equally for his spring-coiled tight band, his extended jams—typical tracks top 10 minutes—and his political commitment. His album Zombie was a scathing attack on the Nigerian military. The military responded by attacking Fela's massive commune, beating Kuti, and throwing his mother from a window to her death. Fela, undaunted, responded by writing other protest classics, such as the boiling, poignant "Coffin for Head of State."

Fela, then, wasn't just a musical force. He was a cultural touchstone. That's an almost impossible legacy to try to carry, and yet Seun's latest release, A Long Way to the Beginning, manages to do just that.

In "IMF," Seun is indebted to his dad's Afrobeat jazz/funk mixture. But he also cleverly updates it. This is most obvious in the up-front profanity ("international mother fucker") and in the rapped verses from M1, who spits rhymes like "the President take the money and hide it/and celebrate while the people divided" with an aplomb that would please Chuck D.

Seun's differences from his dad amount to more than just a guest star here and there. Fela's grooves tended to be mid-tempo; loping exegeses for shoulder-shrugging, head-nodding, and much inhaling. Seun's rhythms, in contrast, are revved up and jagged, his songs shorter and more percussive. The result is less groove than recursion; the horns imitating horn loops in their repetitive insistence.

To some extent this makes Kuti's music more radio friendly; "IMF" is short and hooky enough there you can almost see it being a pop single. But in their speed and almost hypnotic use of the same riffs over and over and over, songs like "African Airways" also evoke other, less mainstream contemporary genres. Like, for example, the Chicago juke of RP Boo:

or the New Orleans bounce of Big Freedia.

There's no reason to think that Seun is familiar with these particular examples, because they could be multiplied endlessly. The kind of insanely repetitive song structure that Fela got from both Nigeria and James Brown, that cross-cultural African/African-American rhythmic funk—it may be sped up, harshened up, popped up or sharpened up, but twist it or shake it as you will, it's everywhere.

Which is why, for a scion of a famous father, Seun seems remarkably free. Even successful musical heirs, like Justin Townes Earle or Carlene Carter can sound like they're looking over their shoulders; to the extent they succeed, it's because they make that gesture aesthetically meaningful. But Fela's music looked ahead so presciently that looking back at it now is virtually indistinguishable from just looking around. The baseline in Seun's "Kalakuta Boy," for example, could be a Fela riff, but it could just as easily be a sample. Similarly, when Seun declares, "I show no fear cause the great man trained me," it’s natural that he talks about his dad in a half-spoken, half-sung quasi-rap. If Seun is in Fela's shadow, and indebted to Fela's example, well, who isn't? The son doesn't have to feel particularly burdened by his familial legacy, because Fela is everyone's daddy.