"Dirt Road Anthem" laid claim to country and rap, past and present. 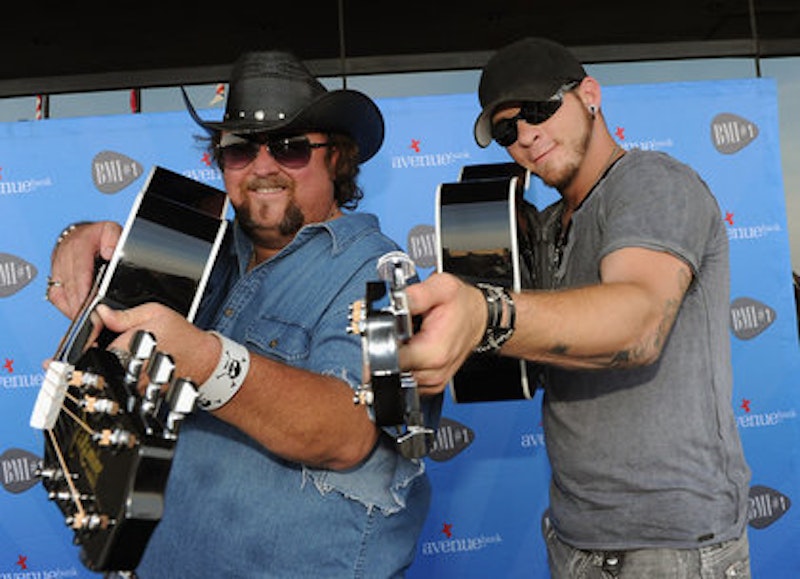 Most people think of country and rap as two opposing entities. Country is predominantly made by white artists, rap largely by black artists. Country focuses on the rural, rap on the urban. Country still depends on pop’s most old fashioned tool, the guitar, while rap constantly evolves and mutates, so that songs from six months ago might already sound dated.

But few dichotomies are actually that straightforward. Back in 2008, Brantley Gilbert, a country singer, and Colt Ford, a rapper from Athens, Georgia, co-wrote “Dirt Road Anthem,” a smart track that simultaneously laid claim to past and present. It revolved around a little guitar loop and a synthetic beat that could have easily appeared on an album from the R&B smoothie Babyface or the southern rapper David Banner. Mimicking this duplicity, Gilbert invoked one of the biggest stars of classic country, but did so with language popularized by West Coast gangsta rap, singing, “You know I’m chillin’ on the back roads/laid back rollin’ to some George Jones.” Ford rapped the verses in a workmanlike style—not flashy, but effective. Jason Aldean eventually re-did the tune, adding pedal steel, live drums, and extra guitar to ensure that listeners identified it as country despite the rapping. In his hands, the song became a Top Ten pop hit, selling over four million copies.

The country mainstream noticed, and has started evolving, but it’s still not ready for Kuntry Livin’, the debut album from Big Smo. Smo’s a strange mishmash: topically, he’s perfect for country radio, full of truck-and-beer stories. But he also loves crunchy guitars, which have no home in country’s current landscape. This guy is a rapper, but he’s big-voiced and gruff, unlike most of the rappers thriving on hip-hop airwaves. Plus, he frequently talks about the struggles of working-class life, a topic that’s rarely discussed in rap or other genres. This doesn’t necessarily make a great combination, but it’s certainly an unusual one.

Most of Kuntry Livin’ involves looped guitar riffs and basic drum patterns. Smo raps at a pretty consistent pace, usually layering his own voice, making a thick presence even thicker by multiplying his rough tone. Occasionally he drafts singers to provide hooks—Frankie Ballard and Darius Rucker both show up; neither makes the slightest impression. “Cover My Eyes” is one of the few tracks to deviate from the norm: it’s a gentle ballad with a steady bass line.

“Cover” is also an outlier thematically, as Smo raps his way through a tale of heartbreak. What stands out on Kuntry Livin’ is the constant references to hard labor. One of Smo’s first couplets: “I’m working till it’s hurtin’/that’s the only way to make an honest day’s pay.” “Anything Goes” is about a party, but he also notes that he’s “pushing through a double shift ‘cause I gotsta get paid.” On “Redneck Rich,” he’s got “a few heavy bills just weighing me down;” he’s “doing what [he] can, just to wait them out.”

Aside from the presence of Ballard and Rucker, this music does not compromise. This sets it apart from possible predecessors. Devil Without A Cause, Kid Rock’s 1998 country-metal-rap album, had an early Def Jam style which helped it woo a larger demographic. The white rapper Bubba Sparxxx, from Georgia, melded his idiosyncrasies with the pop-savvy of the producer Timbaland, resulting in a few hits. None of that for Smo—he’s “backwoods, home grown,” and “just a little crazy.”

Brantley Gilbert, of original “Dirt Road” fame, doesn’t have anyone rapping on his new album Just As I Am. But his aesthetic still stands out among country’s honeyed vocalists. Gilbert favors screaming guitars, and lots of them. His is the toughest, loudest country album this year.

He’s not the first artist to try to make a bruising country album—the better known singer Eric Church took his own crack at it back in February. Church talked a big game, but he didn’t deliver, occupying himself with empty signifiers: a spoken word portion about the ills of Nashville and knotty guitar heroics that began to verge on meaningless. Gilbert manages to fuse a raucous guitar attack to country’s economical structures without all the pretension.

A song like “My Baby’s Guns N’ Roses” begins shrewdly with a pummeling riff that descends into the first verse. Opening a tune by drilling down allows every hook to smash its way up louder and harder than the one before it. The gal in question here is “shooting whiskey singing ‘Sweet Child of Mine’” and dancing with the devil. There’s plenty of toughness on display, but Gilbert also sneaks in a note of apprehension: she “thinks [he’s] an outlaw/that’s double trouble.” The furiously-riffing-rocker is nervous that he’s going to have to cause extra trouble in order to meet his baby’s expectations.

The ballads land soft like a ton of bricks. “That Was Us” recasts a nostalgic tune like Springsteen’s “Glory Days” as a man-to-man ballad. “I got my mail today, this economy sucks/bunch of bills I can’t pay, I guess they’re shit out of luck,” sings Gilbert. To escape the present, he spends the rest of the song reminiscing. “I’m Gone” plays pleading and sweet, but it’s actually a statement of independence as Gilbert walks away from a relationship. “I’m not going anywhere,” he sings firmly, but it’s not because he’s holding on tight—he’s split.

Good as Gilbert’s album is, maybe he’s selling himself short. His work on “Dirt Road Anthem” came too early. Get back in the studio with someone like Ford or Smo, and make the country-rap fusion album everyone should hear.