High Up with The Split Level 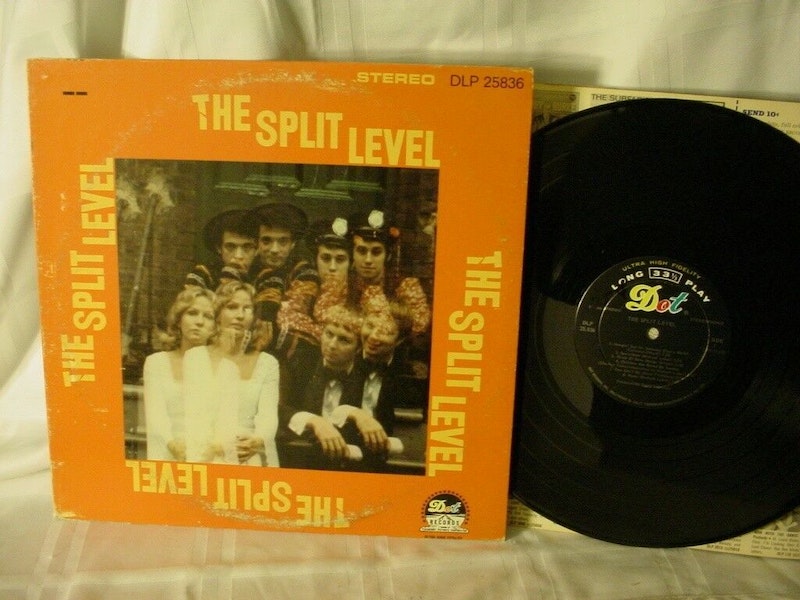 An enduring product of the post-punk movement has been the jangly guitar band. More traditional than any of the punk sounds that influenced them but too eccentric to fit in with standard rock fare, post-punk jangle was the creation of acerbic outsiders whose love for melodic hooks overshadowed their respect for defiant atonality. Orange Juice, The Smiths, Aztec Camera, REM, and the Flying Nun label bands were the major progenitors of this sound. Not only did these artists offer inventive takes on guitar music, but they also wrote lyrics that skewered the social problems that plagued the punk/indie music milieu as it made the migration from grass roots/DIY art communities to the plastic/profit-driven Shangri La of the entertainment industry.

The recordings of Love, The Friends Of The Family, Syd Barrett, The Velvet Underground, Moby Grape, and many other 1960s rock bands presented embryonic variations of post-punk jangle’s complex stance. As influential as they were, few of them ever matched the progressive ambitions of the lone album by NYC quartet The Split Level. Their 1968 Dot Records LP Divided We Stand is a document of its time and a testament to the alienation and emptiness that comes when art’s novelty as a social lubricant clashes with its power as a personal expression.

The Split Level was formed by actress/musician Liz Seneff, and folk music vets Lenny Roberts, Michael Lobel, and Al Dana. Seneff in particular had an impressive resume, including a stint with the post-Kingston Trio group Whiskeyhill Singers (where she replaced Judy Henske), numerous uncredited TV voice-over roles, singing the theme from Candid Camera and a popular Coca Cola jingle, and racking up several appearances on early-1960s TV hit Hootenanny. By ‘68 she’d married and divorced a prestigious academic (Robert Corrigan, head of the Carnegie Tech drama department), and she’d garnered a cult following among the indie folk scene thanks to her 1964 Gateway Records solo album Now Listen To Liz. Throughout the 60s Seneff endured a rush of highs and lows; her bandmates weathered similar experiences as struggling artists. Divided We Stand went beyond folk parameters as the quartet used dissonant rock to immortalize their struggles and the sense of alienation they felt being inundated by trendy electric music and counter-culture.

“Equipment” is a high point and the record’s most historically important track. Rarely has a song been a better document of the powerful yet disorienting consequences that came when technological overload first rose to pop eminence: “Now you hear the feedback cry/Touch the microphone and die/Electrified by your equipment! Miles of dials on piles of equipment!… What can compare to the sound and the throb of the bass cutting through at the flick of a knob? And the rhythm guitar with the pile driver beat makes you jump up and down till your shoes leave your feet, with the hiss of the cymbal, the crack of the snare, and the lead playing notes that tear holes in the air?”

“Equipment” has a counterpart in “Hangin’ Out (In Someone Else’s World),” a psych track co-written by NYC pop legend Cirino Colacrai and future Law & Order star Jerry Orbach (then more famous for his work in the original cast of The Fantasticks and other stage musicals). While technology is in the crosshairs of “Equipment,” the pain and desperation of feeling alone in a crowd are the main themes of “Hangin’ Out.” Both tracks make critical references to shallow night club culture and the 60s pop scene’s trademark blur of noise and light. This is ironic as “Equipment,” “Hangin’ Out,” “You Can’t Go” and several other tunes on Divided We Stand brandish the sound that was synonymous with the crowded/psychedelicized discotechs that their lyrics eviscerate.

The group’s versatility shines in other tracks that experiment with a cappella harmonies, choral music, audio theater, and bombastic/classical arrangements. Teenbeat alienation is just the tip of the iceberg; The Split Level take cunning potshots at everything from monogamy (Seneff’s somber Scott Walker-ish “Rose Garden”) to the military industrial complex (proto-Young Marble Giants creep-out “Speculator”) to the evils of utilitarianism.

This latter concept inspired the record’s most innovative song, an early snyth-pop opus called “Looking At The Rose Through World Colored Glasses.” This scorching cauldron of spiky guitars, Ethio-jazz, and electronica predicted the work of Missing Persons, Tom Tom Club, and The Buggles by more than a decade. Surrounded by kinetic analogue synths and bubbly kalimba, Seneff’s choppy coo illuminates an anti-social world where destruction is a powerful sedative: “When life becomes a symptom death becomes the cure.”

And with a screaming comedy bit, it all comes to an abrupt end soon after “Looking At The Rose…” fades out. Even though the album’s production values stay high (orchestral accompaniment is featured on about half of the songs) there’s a distinct emotional rawness that characterizes every track. The Split Level bask in their own square-ness slagging their dayglo polyester surroundings with bitter sentiments coated in jangling shimmer. It’s this clashing sweet-and-sour attack that makes Divided We Stand 1960s post-punk’s finest hour.