The queer singer-songwriter sings for and to her rural home. 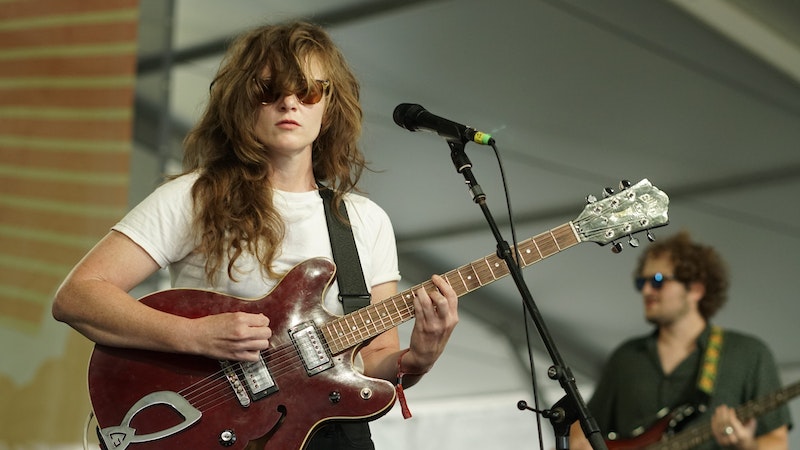 Singer-songwriter S.G. Goodman is blowing up. She was profiled in The New York Times this week, and her second album Teeth Marks, recorded in Athens with producer Drew Vandenberg, looks ready to vault her into a national alt-country phenomenon. The recognition is well-deserved, and fits Goodman well by fitting her so awkwardly. A Kentucky native who still lives in the small college town of Murray, Goodman’s always been open about being a lesbian, and about the tension between her politics and those of the state’s majority. Her music negotiates the overlaps and contradictions of her different communities and commitments. A more national profile, and a new audience, isn’t so much a break with her approach as an extension of it.

The title track explores those connections in a personal context that serves as a metaphor for more. The music is a folksy, coffee-shop strum, with Goodman’s quavering accent sliding over the lyrics. “When you left the bed/After you bit my arm/A little souvenir/Where your teeth left marks.” It’s a bittersweet recollection of romance which can also be about other relationships or about people that care for you and then don’t care for you quite enough. The memorable, flowing melody breaks apart into dissonant ambience as the song drifts towards its end. “Maybe in time you’ll see things my way” is, variously, a hope to reconcile with an ex, a hope to reconcile with a community, and a musician musing about taking over the world.

There’s a lot of the world in Goodman’s album, but her eclecticism isn’t so much an urban stew as a mountain road. “Heart Swell” is another folk number with lyrics that (more or less intentionally) reference Neil Young’s “Heart of Gold” and a guitar part that’s poised to launch into some Youngish feedback fire before the melancholy restrains it. The pop guitar jangle on “All My Love Is Coming Back to Me” is backwoods George Harrison, with a little Thurston Moore dissonance thrown in—though Goodman’s nasal accent never leaves Kentucky. “Work Until I Die” has a stiff, clattery New Age rhythm, and the guitar sounds like its scraping over metal. Goodman’s lyrics are delivered as a quasi-rap: “Listen, listen all around/noisy rhythm in this town/well I’m back to the rhythm/work till I/back to the rhythm/work until I die.” If Devo got dropped from their spaceship into rural Appalachia, it might sound something like this.

My favorite track is “You Were Someone I Loved,” an unaccompanied mountain lament in the haunting tradition of the Carter Family or Almeda Riddle.  Goodman’s piercing tone sounds 1000 years old as she sings, ““Just like a mama killdeer/I covered you up/ Oh, I covered you up/You were someone I loved.” She pronounces “killdeer” like “killdee,” because that’s how you say it there. The song has a slow weight, with the same lines repeated over and over. There’s slight variation though, one of which is “Oh they covered you up/Oh you weren’t someone they loved/Oh not someone they loved.”

You can’t hear that bleak denial of affection in this context without thinking about stigma, about who’s allowed to love who, and about who’s accepted into tradition and who isn’t. Goodman isn’t so much putting modern sentiments back in time as she’s calling forth a past that’s been covered up, singing ancestors out of the grave. The music is of its place, not least because it’s marking its place, in Kentucky and beyond.