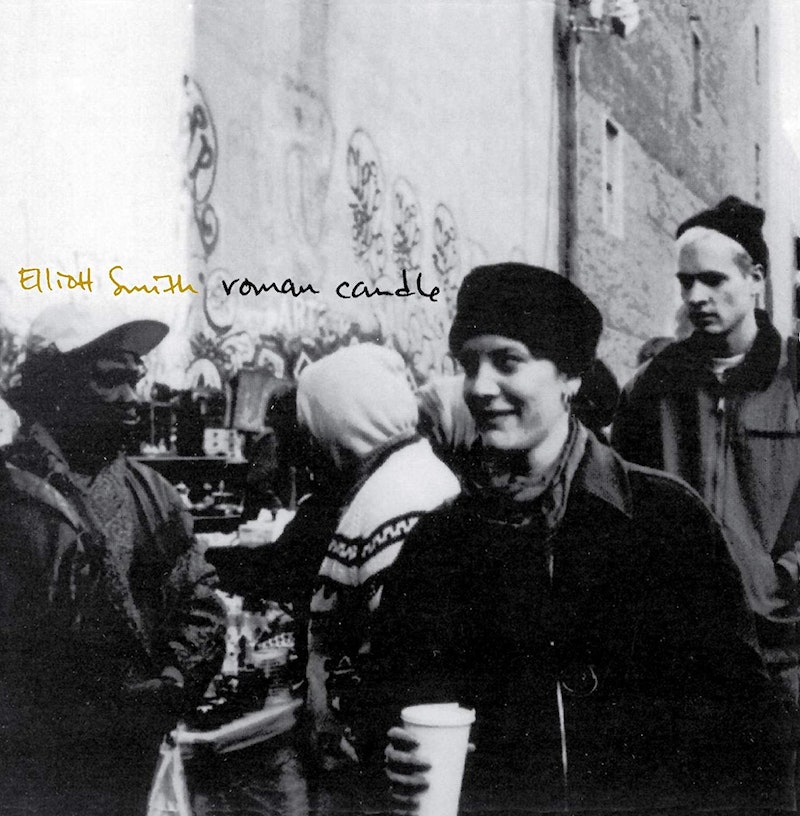 It's been nearly 10 years since I first heard Elliott Smith's debut record, Roman Candle, originally released on cassette in 1994 by Cavity Search, a small label located in Portland where Smith lived. Last week while browsing the new arrival bins at a local record shop I found a used vinyl reissue. I bought it, returned home, and listened to it three times in a row. Each listen contained a unique freshness. I'd notice a chair creak I hadn't heard before or a particular lyric struck me in a different way. It's a dense album, an amazing telling of what was to follow in Smith's short-lived career.

Roman Candle has a rawness that sails through the spectrum of brutality and gentleness. Elliott's lyrics can be filled with hate, pain, and anger, as in the chorus of the title track, “I wanna hurt him/I wanna give him pain/I'm a roman candle/My head is full of flames.” Yet his lyrics can also be filled with empathy and compassion, like “No Name #3”:

Blushing in the sky

Smith had the unique ability to take a complex situation and make it relatable. In “No Name #1,” the narrator describes being at a party and feeling like an outsider. They attempt to strike conversation, to fit in, but nervousness stunts their attempts and freezes their intentions. We've all felt this before, lonely in a crowded room. With heightened sensitivity, Smith digs even deeper into the psyche of the narrator.

“Go home and live with your pain

Leave alone cause you know you don't belong

Knowing the artist's unfortunate fate, it's not unusual that Smith had an anthem hinting toward suicide. “Last Call” is one of my favorite songs for that reason. Not because of his demise, but because these are the thoughts that often clutter my mind during dark periods. Hearing Smith sing about these thoughts serves as introspective therapy, one that differentiates from conventional psychiatry. The song contains a level of realness and awareness that other methods lack.

“Last call, he was sick of it all

The endless stream of reminders…

And I think I'm all done

You can switch me off safely

While I'm lying here waiting for sleep to overtake me”

The meaning of the song is ambiguous. It could just as easily be about a failing relationship, which is part of the beauty of Smith's music. The lyrics are what you make of them. Roman Candle fell into my lap at the exact time it was meant to. I was 15 and in high school. My anti-social tendencies and inability to relate to classmates and teachers led to a conscious separation between conventional society and myself. I buried myself deep inside music and literature to busy my mind and to escape the idiocy and vapidity I saw in others. I found a CD copy of Roman Candle at a local music store and picked it up because I’d heard comparisons to Nick Drake, whom I was also in the midst of exploring. I listened to the CD non-stop. It felt as if the world had finally opened up and all the sadness circling through my head found a point to gravitate.

Recorded on a four-track, the nine-song album was my introduction to lo-fi music, a genre I’d learn to love. You can hear Smith's fingers squeak against the strings. His voice is unpolished. The static of the room resonates in the background. Everything about that album is real, unlike the over-produced music that clutters radio stations.

Ten years later, the album holds up. While the days of emotional music have faded into falsehood, Smith's music lives on through his fans. It takes a particular person during a particular period of one's life to fall deep into this music, but when it happens the beauty and significance intertwine.

When I first listened to Roman Candle, I didn't consider myself a musician. I could clumsily strum a few chords on an un-tuned, dead-stringed guitar, but didn't understand the concepts of composing, songwriting, chord structures, or lyricism. I was 15 and mainly interested in hip-hop. I also enjoyed classic rock bands like Pink Floyd, The Velvet Underground, and The Kinks, but my interests were not yet fully developed.

In these past 10 years, my ears have absorbed an obsessive amount of music. Yet nothing quite affects me as Roman Candle. The album’s perfect. Smith recorded Roman Candle after departing from Heatmiser, a band that was more indicative of 1990s-era grunge. Recorded on a four-track, these nine songs embody Elliott's gentle and brilliant songwriting ability. I became obsessed with the guitar squeaks, the vocal pops, and the background static of the room. This record in particular spawned my love for lo-fi music. By the first line, even the first note, I was hooked.