Conor Oberst Knows That No One Knows For Certain

Upside Down Mountain is his best album in years. 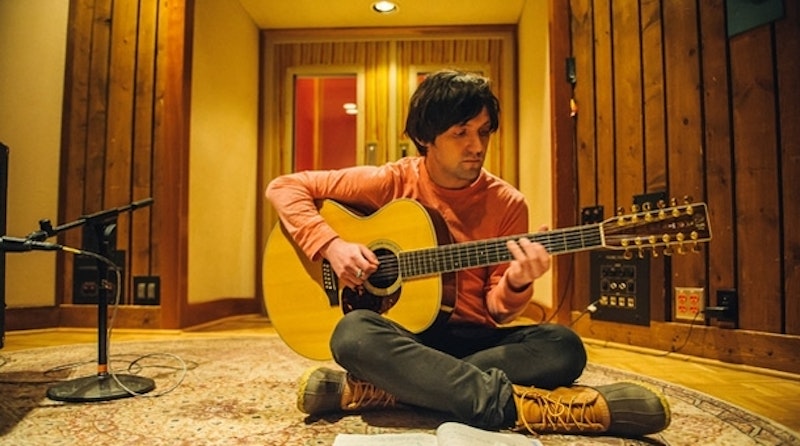 Several songs from Upside Down Mountain, the newest album from songwriter Conor Oberst, have floated around the internet over the past couple of years. He’s performed them live with a combination of friends and fellow musicians including Blake Mills, First Aid Kit and the Felice Brothers. I saw him play “Kick,” “Common Knowledge” and “You Are You’re Mother’s Child” in 2012 at an intimate solo, mostly acoustic show in DC. It was the perfect show to take your parents—Oberst kept the rambling political rants to a minimum and made a few sentimental jokes about his parents. He later pointed them out in the crowd. My own parents came along, which took little convincing, as my father has been a die-hard Oberstian since the mid 2000s.

Oberst, 34, has been at it for over half his life, first releasing solo cassette tapes in the early 90s with help from his older brothers and their friends. Those early tapes and the label that released them became the foundation for Saddle Creek Records in Oberst’s hometown of Omaha, Nebraska. From there he started recording under the moniker Bright Eyes—bringing raw, rambling, poetic tunes to adolescent ears across America.

He’s recorded in several bands and under different monikers over the last 20 or so years, including Bright Eyes, Desaparecidos, Monsters of Folk and The Mystic Valley Band. Not only are the outfits’ different, but all the albums are as well. Spend some time with Bright Eyes’ most successful album, 2005’s I’m Wide Awake, It’s Morning and then follow it up with the cryptic, sci-fi, electro-sounding The People’s Key and you may be fooled into thinking they’re two entirely different acts. Well, that’s until you hear Oberst’s voice, which is as distinct as any in contemporary music. Annunciating every syllable, Oberst takes pride in his lyrics—a self-proclaimed poet first, musician second. So while he’s covered nearly every genre—from folk to rock to punk to pop to electronic to country—one thing stays constant: he provides an emotional story so compelling, stark and humanistic that you can’t help but feel connected to every hanging metaphor.

Upside Down Mountain (Nonesuch) is certainly a better companion to I’m Wide Awake, It’s Morning than The People’s Key but there’s something decidedly different about Oberst this time around. Many would argue that from 2000 to 2007, he released his best work, mainly because the lyrics that filled those albums (Fevers and Mirrors, LIFTED, Wide Awake and Cassadaga) were unparalleled by any of his contemporaries at the time. He then took a break to write some carefree road tunes with The Mystic Valley Band and spend some time with Jim James and M. Ward to release the self-titled Monsters of Folk LP. With The People’s Key in 2011, Oberst’s heart-on-the-sleeve narratives were absent and instead we were forced, for better or worse, to encode the twisting, dark, computer-aged phrases of a sci-fi obsessed singer. He’s admitted that much of that album was inspired by a period of deep obsession with writers like Verne, Vonnegut and Atwood.

Oberst’s head is a bit less cluttered and more straightforward than the last time around. The difference? He’s accepted that all questions don’t have answers and problems solutions, but that living and moving and learning helps to alleviate some of that pressure. Perhaps his marriage to Corina Figueroa Escamilla, a Mexican woman he met while recording 2008’s self-titled album, has a lot to do with that optimism. But don’t be fooled into thinking this is a happy-go-lucky album. In fact, it’s filled with some of the most gut-wrenching lines that Oberst has ever penned, like “…either way it's how it happens/Not the way that you imagined/Or go out with a bang like Hemingway/Some will say you're brave/Some will say you ain't,” on the closer, “Common Knowledge.” Call me morbid but there’s a sliver of peaceful understanding in that line, even if it puts a lump in your throat as you listen.

Oberst took a few departures on this release: instead of using his Bright Eyes bandmate and producer Mike Mogis, he went with Jonathan Wilson, the LA-based producer and musician who’s worked with Jenny Lewis, Father John Misty and Dawes. The result is the best-produced Oberst album since Wide Awake—a flawless, warm and inviting sound that drips of the 70s in Laurel Canyon while still sounding very much like a 2014 album. While the concepts shift from love, fame, loss, self-discovery and death, Wilson’s production, which includes lush, shimmering acoustic guitar sounds, slide guitar, bouncy piano, horns and the beautiful harmonies of the Swedish duo, First Aid Kit, unite them exquisitely.

Oberst’s known for collecting whatever songs he’s written during a period of time and making them into an album, giving little thought to whether their styles and themes can co-exist. Wilson’s production allows no such problem to exist—making them all seem perfect chapters to the story. Whether he’s singing of RFK Jr.’s socialite daughter, a weekend at a corporate music festival or B-list fame, the songs flow together effortlessly.

The Neil Young-esque “Zigzagging Toward the Light” will make for a killer live show, which will feature Dawes as his backing band, while the slower “Lonely at the Top” would fit in right alongside “We Are Nowhere and It’s Now” from Wide Awake. The tender “Aritifact #1” has a Paul Simon quality to it, with its rhythmic acoustic guitar patterns paired with mandolin and slide. On the opening line Oberst asks, “What would it take to gain acceptance to the ground behind your eyes?”

Oberst’s a fine lyricist, but never has he crafted songs with such simple phrases—relying less on twisted metaphors and more on his gift as a writer. “If someone says they know for certain, they’re selling something certainly,” he sings. Perhaps the biggest lesson to take away is that line. It’s okay to waver; it’s okay to change because it’s impossible not to.