Childhood memories of the Beatles, cont. 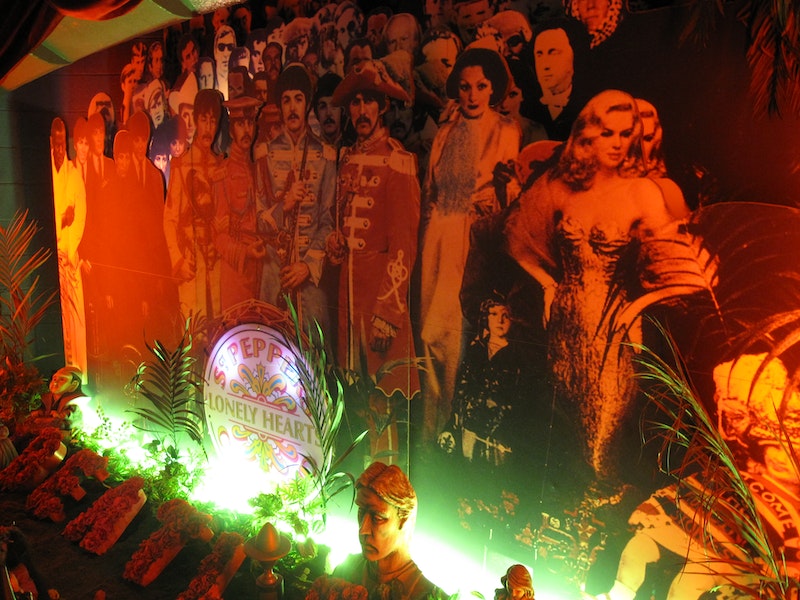 Sgt. Pepper was much better than Help. But, songs aside, the old people indicated that some sort of fuss was attached to Sgt. Pepper and the Beatles. The boys had taken on a second identity. I didn’t know what was wrong with the first, which was represented on the cover by the four sad dummies in their dark suits. Nor did I pin down what a lonely-hearts club was, or how such a club came to be involved with a performing combo. Or how much the Beatles actually were a lonely-hearts club band led by someone named Sgt. Pepper—not much, apparently. They didn’t wear the funny uniforms except for pictures. They hadn’t even decided which, if any, of them was Sgt. Pepper, though I guess it was Paul. But the Beatles did have the curvy mustaches and other elaborate hair-growths; those stayed, uniform or no uniform. Other people didn’t have those things.

What I took away was that people made a fuss about Sgt. Pepper and his band, but that there was no follow-through to the fuss. There was no prospect of seeing Sgt. Pepper’s Lonely Hearts Club Band standing there and performing their instruments, and nobody thought there ought to be. Yet people—adults (a term that at that age meant the Beatles and my parents and men who drove trucks and men who made album covers)—put that band on the cover and named the record for it. They said the name, they posed the pictures, they made the fuss. But that’s where matters ended, and I was a schmuck for thinking there might be more.

This mismatch registered in the back of my mind; it was subliminal. But I sensed myself being wrong-footed by the adult world. They’d never let me in on the secrets, on why our set-ups for living made sense. I’d always struggle among things that didn’t add up. Now, of course, I get Sgt. Pepper. They were goofing! Everyone knew who those boys were, no matter what, so the boys could put on hats and give themselves a silly name (a second silly name, I should say, an additional and far more elaborate one), and then toss away hats and name and go back to the status quo ante. Sgt. Pepper didn’t have to be much of anybody; he was a thought that amused the Beatles, and for the rest of us that was enough. To be subtle about it, one might say the new guise amounted to a backhanded boast, a triple-axel display of career one-upmanship. The Beatles were so big they could wear a disguise on their album cover. They could engineer a drum-roll and build-up, not for themselves, but for this throwaway identity that mattered only because they mattered.

In short, nobody was as serious as I thought they were, yet they were serious enough about what mattered to them. Listening to the songs now, I’ve lost that unsuspected mental echo chamber that comes into play with small children, the sense that the adults must be doing something of weight. As it turns out, there’s no big reason the men on the stereo made all that noise about fixing a hole or how their morning was or the utility of their immediate social circle. Yet they were serious after all—about pretending, about flair, about beauty—and I re-learn how when I play their record.