Formula For an Earworm

Popular culture is basically about the endless manufacture of sameness. 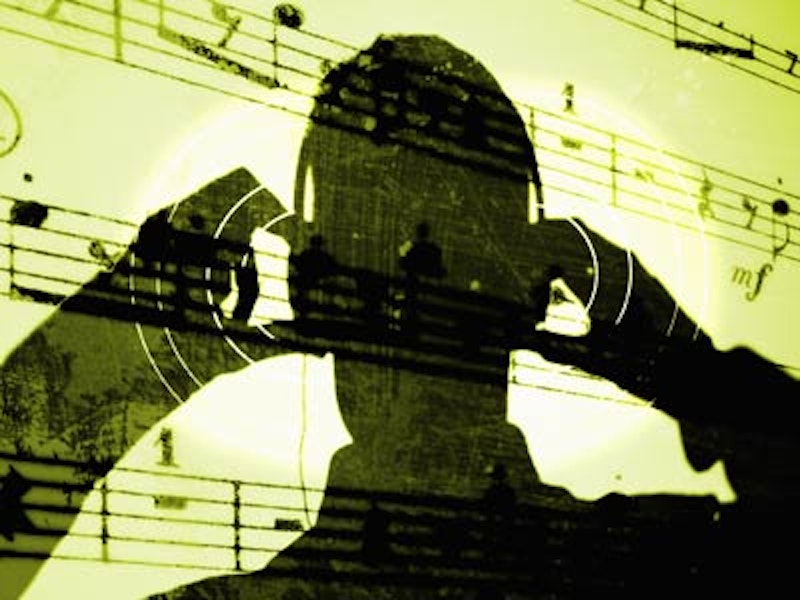 Every Thursday night I go to Hotel Chantelle, a grungy, Lower East Side haunt where on one floor there’s hardcore rock and roll, tattoos, spiked hair and burlesque dancers working stripper poles, and in the basement there’s indie-electro music, strange outfits, and lots of people with suspicious sexualities. One Thursday the DJ played 10 seconds of a song I love and have passively heard when I’ve been out before, but never knew what it was or thought that deeply about how much I liked it. Well, that asshole changed the song right as I remembered to Shazam it and I didn’t think to ask him what it was. At that point the melody was already jammed into my earlobes.

Do you know what it’s like to have a song stuck in your head that nobody else can hear? It’s like being slightly crazy. So, the best thing to do when you get an earworm is to just play the song over and over to death until you eventually get sick of it. But what do you do when you don’t know what the song is in the first place and can’t exorcise it from your brain?

The next day I listened to all of the Billboard Top 100 Songs. If it’s a hot song, it’s on somebody’s chart somewhere. No dice, though I did run into that insanely infectious “Call Me Maybe” song by Carla Jean Baker, or whatever her name is, which was still at the top of the charts. Maybe, I thought, this particular song is too, like, hip to be on a Billboard chart. So I went on over to Beatport, which is where a lot of DJs get their music, and that didn’t work, either.

Then I remembered that you could hum a song into Sound Cloud so I did that, with no obvious result.

Still determined to find this song, the next day I took my non-singing self over to my local record store—if anybody knows what this song is, those painfully hip fucks will. I told the girl that the song was dance-y but kind of chill. I said it had a kind of new wave, 80s vibe to it with a lot of synths, but that it was probably made within the last few years. I said that it could be M83, or Washed Out, or Discovery, or Simian Mobile Disco. Still, no dice.

After days of trying, eventually I forgot the song—I couldn’t hear the melody in my head anymore. But it did raise an interesting question about how popular music works. When I go out dancing I prefer places that play non-Top 40 stuff, at least not the Top 40 from the past few decades. I’ve said it once and I’ll say it again, I don’t know why people go out to hear the radio—Britney, Rihanna, etc. Don’t get me wrong, I do love me some straight up Top 40 at times, but it’s interesting how the liking of it totally depends on where I hear it. If I play it on my own, I’m okay. If I hear it at the club or somewhere else where I’m there to have a new experience, I become annoyed, and I think it’s because a standard Top 40 song played in the context of a nightclub reveals the music’s greatest secret.

I recently read an essay by these German philosophers Max Horkheimer and Theodor Adorno where they talk about how popular culture is basically about the endless manufacture of sameness. All popular culture—so films, television, and music—is produced conveyor-belt style with an interior that stays the same but with an exterior that is virtually interchangeable. This is why a song could be written for X pop singer but that singer chooses to pass on it and singer B swoops in to claim it as their own. The authors think pop songs are catchy because what makes them so is a formula that the suits in the culture industry have decided works and will thus sell millions of copies. Anything that veers too far from that tried-and-true formula is scrapped because it’s risky and doesn’t turn a profit. That “Call Me Maybe” song is a good example of how to create a catchy song, because everybody talks about how stupid it is and yet everybody sings it, loves it, it’s in everyone’s heads and—yes—it’s still at the top of the charts.

What I don’t want to do is make some judgment about how the Top 40 sucks, because the reality is that most songs have lived on some chart somewhere. But isn’t it interesting to wonder if in the factory of cultural production—where hit songs are made—if there’s some sort of formula that is used to ensure not only that a song goes viral, but that the catchy chorus is created to be stuck in your brain? Is there a formula to creating an earworm?