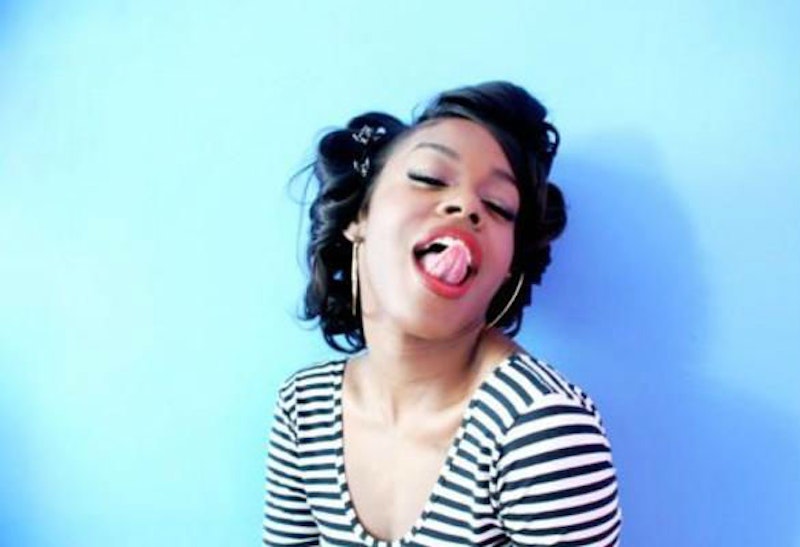 What is “Jumanji” about? There are several possible theories. One could argue that it-girl Azealia Banks cut this banger after loading up on Now’n’Laters and watching the titular 1995 Robin Williams movie for 24 hours straight. Maybe its loop-de-looped verses are a mocking imitation of the haters in her rifle sight, while a hyperactive Banks is tsk-tsking on the choruses. Perhaps, unbeknownst to us, the young MC was invited to teach a graduate-level “Hip-Hop Assonance” course at the New School and figured that showing beats telling.

The answer doesn’t really matter as much as the existence of “Jumanji” itself. Banks, of course, is insane. The 21-year-old Harlem rapper’s fledgling career—not even a year old, mind you—has been a hype-injected flurry of furnace-hot 16s, pedophile-bating promo pix, fashionista/LGBT overtures, and the vicious affront-to-elders that is “212.” To help put this into perspective, Banks spent her first huge single sonning veteran rap dudes and threatened to gank their arm candy without batting an eyelash. That was awesome, and the rest of the 1991 EP reps enthusiastically for the era when Banks was conceived.

But “Jumanji” trumps that handily by celebrating the joys of shuffling consonants hard and soft alike like decks of playing cards. Producers Hudson Mohawke and Nick Hook lace her nicely enough: fairy-dust ripples, hollowed-out drums, an effect that suggests the skin-on-skin flashpoint of a golf clap sampled and looped, violent tug-of-war/corset-string yank synthesizers that remind me of Miri Ben-Ari torturing her violin in old Kanye West videos. When Banks shows up, their fantasia turns into a beat-down, a collapsing-domino endorphin rush of syllables that seem to escape her mouth before she can properly enunciate them. Bananas, hammers, chinchillas, leathers: it’s dead serious, it’s deliciously daft, it’s wildly trivial, it’s somewhere beyond the reach of transcription—making it a familiar mystery. It’s a blur as complicated and coded as the meme surrounding her. “Real bitch all day, uptown, Broadway,” Banks sneers in a refrain that’s an island of logic in an ocean of mental-ward madness; that burst of cocksure lucidity has the effect of confusing the issue further. “You’re fruity, tootie, and rootie,” she teases later, against a steel-drum backdrop, daydreaming of cars and watches Scarface probably can’t afford—or, oh wait, is that Rudy? Is Azealia Banks calling me a motherfucking Huxtable?

“Missy Elliott” and “Rye Rye” and “Lil Mama,” understandably, pop up when people write about Banks; those are valid comparisons to draw for obvious reasons. But on “Jumanji,” her closest analogue is a dude: Purple Haze-era Cam’ron, whose human-chattel rhymes reliably devolved into nonsensical Michael Leslie Winslow anti-semantics, a cross between amphetamine-assisted baby talk and slang about pulling a piece on somebody. It’s a good look for Banks, but it’s anybody’s guess whether she realizes that—or whether we’ll be talking about her in another six months. Let’s hope so.