On Fiona Apple's Fetch the Bolt Cutters, her first album in eight years and an astonishing one at that. 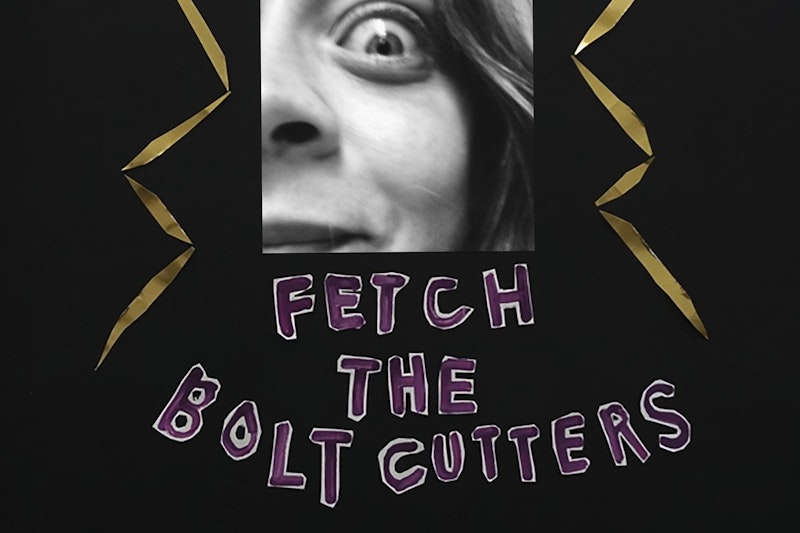 While many critics initially dismissed Fiona Apple as a shrill woman who should smile more, I knew she was destined for great things. She stood out from the rest of her Lilith Fair tour mates with her jazzy piano, moody voice, and lyrics. Now over 20 years since her debut album Tidal, Apple has fully blossomed with her new album Fetch the Bolt Cutters, her best so far. The percussion-heavy music and Apple’s bold voice demand the listener’s full attention as she declares that this world is still bullshit and she won’t shut up about it.

The first track “I Want You to Love Me” sets up the rest of the album. It begins with a brief drum machine bit until Apple’s signature piano greets the listener. Yet there’s something brewing underneath the surface—she bangs hard on the low notes, but gently plays the higher notes. For the first few minutes it’s just voice and the piano, but then halfway through thundering drums come in, and the song ends with Apple screeching like Yoko Ono over a frantic piano. It leaves the listener confused, which is exactly what she wants.

Jenn Pelly of Pitchfork said the album’s raw sound is a feminist statement against patriarchal standards like “professionalism, smoothness, competition, perfection—aesthetic standards that are tools of capitalism, used to warp our senses of self.” I don’t know about that, but it’s refreshing to hear a woman who doesn’t give a fuck about current music fads. Despite the great work she did with former producer Jon Brion—I prefer his version of Extraordinary Machine over the official release—Apple’s now free to make the music she wants. If dogs end up barking at the end of a song like in the title track or if she messes up a line like in “On I Go,” it stays on the record. The unpolished sound gives Fetch the Bolt Cutters a unique edge that’s absent from her previous albums.

Despite the current pushback against “wokeness,” one can’t consider Fetch the Bolt Cutters without the sexual politics. She tackles #MeToo on the tracks “Relay” and “For Her;” the former, according to Apple, was inspired by the 2018 Brett Kavanaugh hearings, and the latter is about a friend who was raped. (Apple herself was raped by a stranger at age 12.) On “Ladies,” Apple sings about not being angry at her man’s other woman, and “Shameika” is the story of a girl in middle school who told Apple not to try getting bullies to like her.

As Apple recently told Vulture, the album is “about breaking out of whatever prison you’ve allowed yourself to live in, whether you built that prison for yourself or whether it was built around you and you just accepted it.” On the title track, she sings about believing what “it girls” told her about what’s acceptable before she found her own voice and realized the criticism was just “the noise people make when they don’t know shit.” On “Under the Table,” Apple tells someone trying to silence her during a polite dinner party, “Kick me under the table all you want, I won’t shut up,” and in “Heavy Balloon” she sings, “I spread like strawberries, I climb like peas and beans,” giving both herself and the listener permission to take up space.