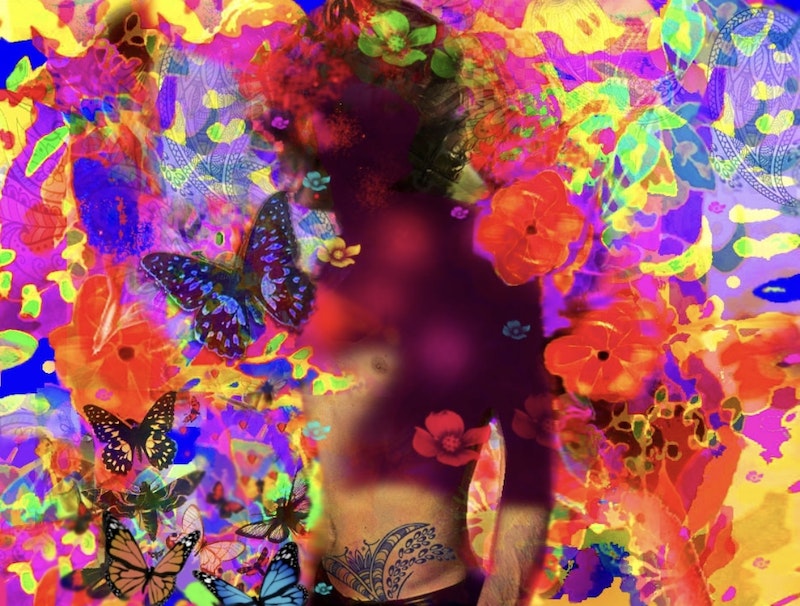 “What are you having?” the bartender asked. He poured shots as we sat in a dive from yesterday, the Firefly in Hollywood on Vine, the place where they used to light the bar on fire with Bacardi 151. “Break on Through” was playing on the jukebox. A biker told me this one between rounds. Here’s the problem besides drinking too much, how much of it is true?

The Santa Ana winds chased crimson clouds across the Hollywood hills. Orange flames rode the canyons. Terry and Jack wondered, “What have they done to the Earth?” Is this an earthquake or are we hallucinating? From the subterranean depths a mythical saint and devil emerges. Jim Morrison’s a man who stands beyond the pale of society. There’s a reason his grave in Père Lachaise Cemetery still receives flowers from pilgrims.

Terry and Jack put a lot of energy into defining the spirit of the 1960s by avoiding US military operations in South Vietnam, passing tests at Kesey’s place in La Honda and hitchhiking to Los Angeles.

Spring of 1966, the mod movement’s born and mini-skirts arrive. Terry’s been living in a remote Twentynine Palms desert commune that just went bust. Then one Hollywood night, Terry returns to Jack’s doorstep wearing a big shit-eating grin. “Hey man, I found you.” The look on Jack’s face was priceless as he said nothing, but thought, ‘This guy’s staying with me, again?’ Oh, I almost forgot to mention LSD was still “legal” in California.

Venice Beach was hot on August 21, 1966. A bunch of dirty seagulls circled Terry and Jack while they ate French fries on the boardwalk. Late that afternoon, Jack heard a very gentle sound. Terry’s dangling a beautiful carrot. Why not score some of the last available “Monterey Purple” from Bear’s original batch? He knew “a guy” around the corner on Market St.

At dusk, the children of the universe flocked along Sunset Strip. There’s a large crowd in front of one particular music venue: The Whisky a Go Go, where go-go dancing got its name. The Doors are playing tonight.

That summer, The Doors were The Whisky’s house band. They played two sets a night, bottom-sharing the same bill with bigger groups like tonight’s act Love. Audiences demand heroes, including rock stars and especially superstars. Headed for success, The Doors’ crown jewel, lead singer Morrison defines their new, disturbing music. Quite an achievement for a group yet to release their first record. It’s true, they played anywhere—even places like Connecticut’s Danbury High School gym in October of 1967.

You Make Me Real.

This will be beautiful.

At twilight, “Took a look around, see which way the wind blows” in hopes of an adventurous evening. Terry and Jack drop LSD.

Stepping outside into the night, the palm trees on Santa Monica Blvd. sway in odd directions. The remaining Doors just left Barney’s Beanery in a VW van on a mission to find Morrison, who missed the first show. Driving around West Hollywood, keyboardist Ray Manzarek was a bundle of nerves. He kept thinking about an earlier confrontation with The Whisky’s owner Phil Tanzini.

Out and about on the corner of Sunset and Clark, Terry and Jack are now tripping their asses off. “Before you slip into unconsciousness,” breathe deep under the star-filled sky. Welcome a streetlight’s pulsating electric glow. Notice a shift in time depth perception. Tumbling ribbons of hair sparkle in graceful streaks of amazing colors and wavy patterns. Dilated pupils looked like black opals tumbling in the sea of tranquility. A sense of self-connect recognizes the past, present and future. Terry and Jack’s silent faces can’t tell the entire story, they’re happy Pismo Beach clams tripping on some of the last legal LSD left in California.

In today’s other news, the first photos from the far side of the moon were beamed back to Earth from the U.S. Lunar Orbiter spacecraft. Terry and Jack both glance over at the moon, the waxing crescent turns into a barking dog’s face.

Back inside the van Manzarek knew Tanzini was pissed. “Hey, I booked four guys. The Doors are supposed to be four guys.” Where was Morrison? There was one place left to look: the Tropicana Motel, room 203. Wishful Sinful. He was there,alone in his underwear and boots tripping on LSD listening to a butterfly scream. Somehow, Morrison made it to the show that night.

“I got some friends inside.” The Whisky’s filled with flower children. Love is all around. Wild eyes flash. Look at these beautiful creatures. A dash of romance was headed Terry’s way. Girls overlap in transparent patterns grabbing the air, doing that swirly thing with their hands like an avant-garde dance piece. Terry’s totally immersed in Morrison’s intense presence. I Looked at You, you smiled at me. An alluring “Twentieth Century Fox” artist face paints an eye on Terry.

Perhaps a moment to reflect upon The Doors. The thing is with Morrison: he’s the “Music is your only friend until the end” man. The Doors’ myth fits perfectly in our cultural narrative. So, if and when you’re feeling desperate or lost, you can blindly fall into a stranger’s arms while taking in The Doors’ music. Who knows, it’s probably Morrison. “Impossible yes, but it’s true.” Which means every day, someone somewhere is listening to “When the Music’s Over.”

“Hey Mr. Light Man, you got to turn those lights way down man.”

The children stand silent. Under a single beam of light, the shaman lifts his head and begins to improvise Oedipus.

“I want to kill you”

Terry and Jack don’t want it to end.

The following morning, Jack felt drained trying to remember yesterday. Terry’s still asleep with a blissful new princess. LSD becomes illegal in California on October 6, 1966. And The Doors were fired from The Whisky a Go Go. Within a week, the group finishes recording their debut album for Elektra at Sunset Sound. Some say it’s one the greatest rock records of all time with a huge hit “Light My Fire.” Talk about killing it.