Fetch the Bolt Cutters in the Raw

Fiona Apple’s self-indulgent moments will set your teeth on edge. 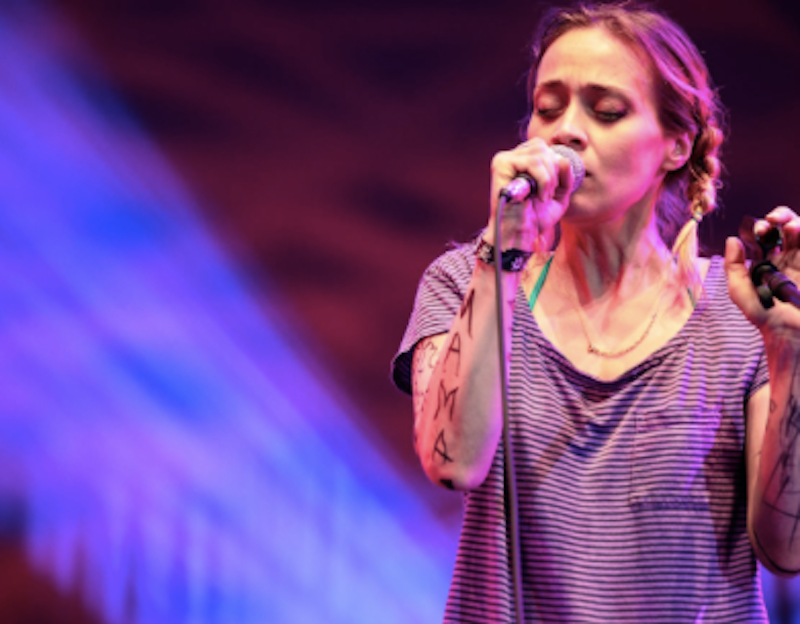 Many years before I was tall enough to see into the booth, I was a fan of cotton candy. I had certain problems with it: the congealed reddish part in the center, the way it stuck to my nose, and the fact that you look like a gaping puppy when you eat it. But fundamentally I enjoyed it, even though I’d no idea how it was made. Later on, I got to see the big metallic centrifuge where the nice man would slowly spin up accumulating strands of pink hair. That was thrilling, too, but it ranked a distant second to the candy’s bliss.

Now that Fiona Apple has released her fifth studio album, Fetch the Bolt Cutters, a lot of people are talking about the way it was made. Apparently, she led her small band on a spree through her house, encouraging them to bang on things. I’m familiar with this approach, as I did that too a few years back, when I really hated my neighbors. Moreover, I really didn’t need the information, since the “origins” of Apple’s new album are apparent the second you start listening to it. Not only does it sound like pots, and pans, and wooden spoons, and that one rare drum you weren’t supposed to touch, all being thumped at once by happy hippies… but there isn’t a whole lot else going on, at numerous points. The album has a childlike sense of wonder about the possibilities of light percussion. Like an actual child, banging on an actual saucepan, this is amusing for a while, then totally unbearable.

Apple’s been living by herself, according to her own records, and was in a self-imposed state of quarantine before the pandemic even began. Like Prince, Ani Difranco, Taylor Swift, and numerous other artists who’ve climbed down a rabbit hole of exile seeking respite from the world, Apple’s now releasing chants and “incantatory” (i.e., repetitive) raps instead of letting the fragments ripen into songs. She’s convinced herself that slam poetry and trauma-addled catechisms are songs, and since she’s living in an echo chamber, there’s nothing and nobody around to disagree. “Evil is a relay sport/Where the one who’s burned/Passes the torch,” she says on “Relay,” six times in a row. “Ladies, ladies, ladies,” she coos, on the appropriately named “Ladies,” 16 times in a row. Those are just two examples; the whole album’s like that. Either you’re the kind of listener who thinks everything in this jagged, beautiful world gathers meaning if you spend enough time cradling its fragile strangeness, or else you’re a well-adjusted pop fan. If you’re the latter, Apple’s self-indulgent moments will set your teeth on edge.

This album came out a month ago, and you might be chuffing me for joining the party rather late, but heed my plea: this would be a better world if the people who write music reviews had to live with their little objects of study a bit longer. Luckily for Fiona Apple, she can still set the “pop and culture” sections buzzing with a single laser-targeted line. “Good mornin’/You raped me in the bed your daughter was born in,” she sings on “For Her.” The first time you hear this, you fall out of your chair, especially given the chorus of overdubbed Apples moaning in the background like Hell’s own banshee choir. Giving credit where it’s due, the production is so extreme that hearing it once is worth anybody’s time. But this kind of spectacular display isn’t enough to keep playing her record on heavy rotation. It’s too specific and concentrated; instead of growing in power, it slowly deflates like a two-second GIF. The delighted reviewers, hearing moments that are so undeniable and immediate, proclaim Fetch the Bolt Cutters as an instant classic—but they’ll scratch their heads, in July, when nobody’s talking about it anymore.

There are a few songs here that could make it onto The Essential Fiona Apple. “Newspaper,” which grooves along on an eerie, minimal jazz melody, has a power that Apple cleverly holds in check by keeping things rough and almost hoarse. The lyrics are knockouts: “We were cursed, the moment that he kissed us/From then on it was his big show… I’m alone on the summit now/Trying not to let my light go out.” The catchy song “Under The Table,” which is charming enough to be a proper “sing-along,” has the chorus “Kick me under the table all you want/I won’t shut up, I won’t shut up.” Now that’s an affirmation anyone who’s ever been unfairly shushed ought to have on speed dial. But those two songs (and the shock-schlock of “For Her”) will be the only ones that create a legacy here.

When the story isn’t the music, something’s wrong; see, for instance, the Time magazine review that quotes Apple from a photo shoot, explains what charities she donates to, name-checks the pandemic, and does everything else imaginable besides tell you that the actual goddamn songs are worth hearing. That’s true of every medium; when we started hearing talk about all the fun everyone was having working on Ocean’s Twelve, we should’ve realized immediately that the actual movie would suck. Yet there’s a part of me that respects Fiona Apple for making an album that celebrates her indifference to the world at large. These are angry songs, but they’re hermetically personal, full of vague references to parties we didn’t attend, laced with in-jokes we can’t possibly get.

Her subject in “Newspaper” is described as “sitting that big cat down,” for example. We don’t have a clue what she means, but somewhere there’s a lady who does. This never would’ve worked as a first album, since it has too few moments that show compassion for the listener. But as a late opus, it has a certain haughty grandeur. It’s like that old woman in an outrageous hat who passes your storefront every day, at the precise stroke of noon, without ever stopping or turning her head. For a single moment, she’s a picture; for a moment, the whole street is hers. Then she’s gone. Out of sight, out of mind. For that’s the fate of every person who—like this latest incarnation of Fiona Apple—can only admit to being vulnerable by denying it.