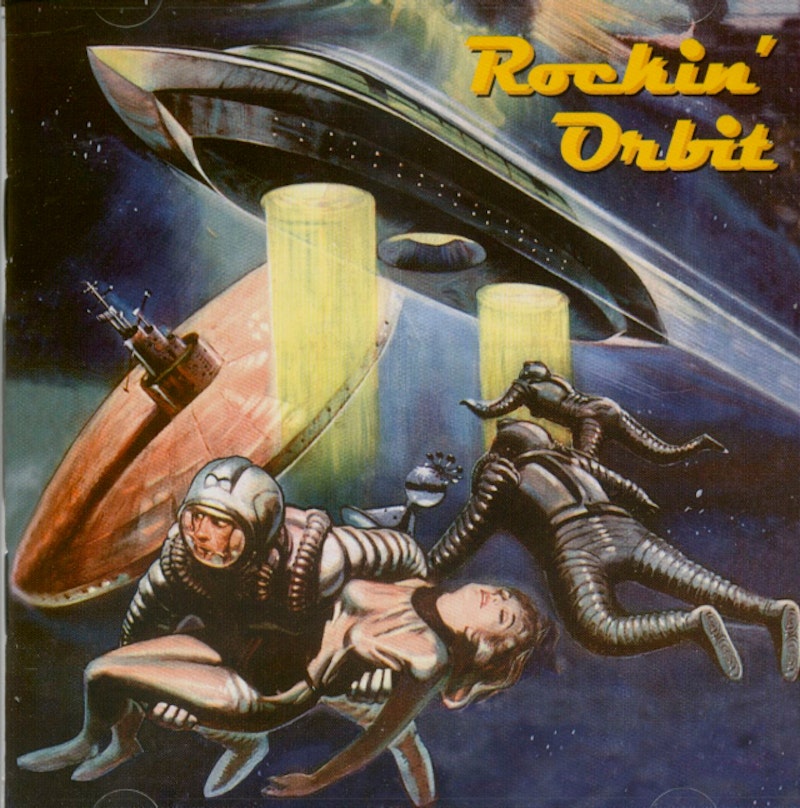 The horror-themed collections released by Buffalo Bop are some of the label’s most celebrated records. Like Jungle Rock, these have plenty of noise-music elements and other forward-thinking concepts. It’s tough to pick one or even 10 or 20 high points from Horror Hop and Monster Bop. Both discs overflow with the creepy aggressive blasting that’s become synonymous with Hasil Adkins, and The Cramps and their horde of modern “psychobilly”/retro-punk imitators.

Of the label’s two sci-fi themed volumes, Rocket Ship is the more musically conventional while the CD Rockin’ Orbit offers a dynamic cross section of spaced-out sounds and styles. A few songs are in the vein of the punk sides assembled on the aforementioned horror themed discs; rockets, aliens, and traveling into space were all concepts viewed with suspicion and fear back when Sputnik, Laika The Dog, and obscure astronomical phenomena were the only things floating above Earth’s atmosphere. Hardcore skeptics of the Cold War-era would’ve presumed anything connected to the early Space Race posed a danger to Earth. Controversy surrounding early UFO sightings also inspired this music.

Though Rocket Ship is the less original of the two releases it does contain one major standout: the Devco label 45 “Rock-it On Mars” by California band Terry Dunavan & The Earthquakes, a defining punk cut of the 1950s and one of the rarest early rock records of any kind. It’s loud, aggressive, sloppy, and strange, filled with the kind of wonky scales and dissonance that made Ornette Coleman a legend. The lyrics mesh perfectly with the music as Dunavan describes space travel and aliens in manic prose and emotionally unhinged vocals that mix sensationalism with utopian fantasy: “We’ve rocked around the world, all over the place/And it’s getting so there isn’t any space/Let’s take a rocket way up there/rock on Mars where there aren’t any squares…/rock on Mars with the funny little men/And their skin will be made out of tin/rock to the sound of funny guitars…”

Echo, vibrato, and what could be a primitive chorus effect all dominate when the song’s guitar solo kicks in. The sonic flourish is meant to imitate the funny guitars mentioned in the lyrics. “Rock-It On Mars” makes the red planet seem like a dream come true for America’s lost generation—the beatniks, greasers, and bored juvenile delinquents tired of manicured/predictable post-WWII society. This lyrical trope of escaping Earth’s mundane realities for greener celestial pastures has been a common theme in jazz and pop music for nearly 100 years; Terry Dunavan, Sun Ra, and Hoagy Carmichael were some of the first artists to embrace it.

Some say that “Rock-it On Mars” is a low-rent version of Billy Lee Riley’s “Flying Saucers Rock’n’Roll,” the first rock hit ever to have sci-fi lyrics. Others say that “Purple People Eater” and similar novelty tunes could’ve birthed this record, but that’s doubtful, as Dunavan was more than just a one-off novelty artist. He later became an in-demand mastering engineer who logged in countless hours working for major record labels in Los Angeles from the 1960s to the present. Dunavan also worked as a studio engineer/co-owner of Hollywood’s Teron Studios. In the early-1970s he recorded Overnite Sensation and Apostrophe, two of Frank Zappa’s most popular and influential releases. Further adding to Dunavan’s outsider music cred was his pivotal role in the production of the lone release by mysterious synth pop artist Roy Esser, one of the few musicians to utilize the proto-mellotron keyboard Chamberlin (a signature instrument for cult song-poem artist Rodd Keith, yet another eccentric associated with Teron Studios). Freaky sounds were in Dunavan’s blood and thankfully his passion for Martian rockers made out of tin will never be forgotten.

Dunavan cut an even noisier/sloppier version of “Rock-It On Mars” that was issued on the Fanfare label. It appears on Rockin’ Orbit with equally bizarre sides like the call-and-response tracks “Zippy Hippy Dippy” by Coye Wilcox and “Satellite Baby” by Skip Stanley. The Coye Wilcox song presents a cartoony narrative about a human trying unsuccessfully to communicate with aliens who’ve just landed on Earth. The aliens are represented by the interference of atonal theremin and gibberish lyrics set to a hypnotic folk blues shuffle a la the young John Lee Hooker. Audacious singer Skip Stanley fronts a loud rock combo bashing out clattering chords and the massive cosmic swells of an oscillator that imitates a satellite’s interstellar transmission codes.

Rockin’ Orbit’s crown jewel is the 1958 single “Ghost Satellite” by Bob & Jerry, the duo of session musicians Bob Summers and Jerry Lefor. Predicting Joe Meek’s weirdest experiments by several years, this song lives up to its title. The track brandishes proto-surf rock arrangements with haunting melodies, screaming Arab On Radar-style guitar runs, and a jarring spoken word intro by Cleveland radio legend Pete "Mad Daddy" Myers. It’s the perfect soundtrack for an eerie adventure into the most remote corner of a newfound galaxy.