Buffalo Dolls of All Kinds 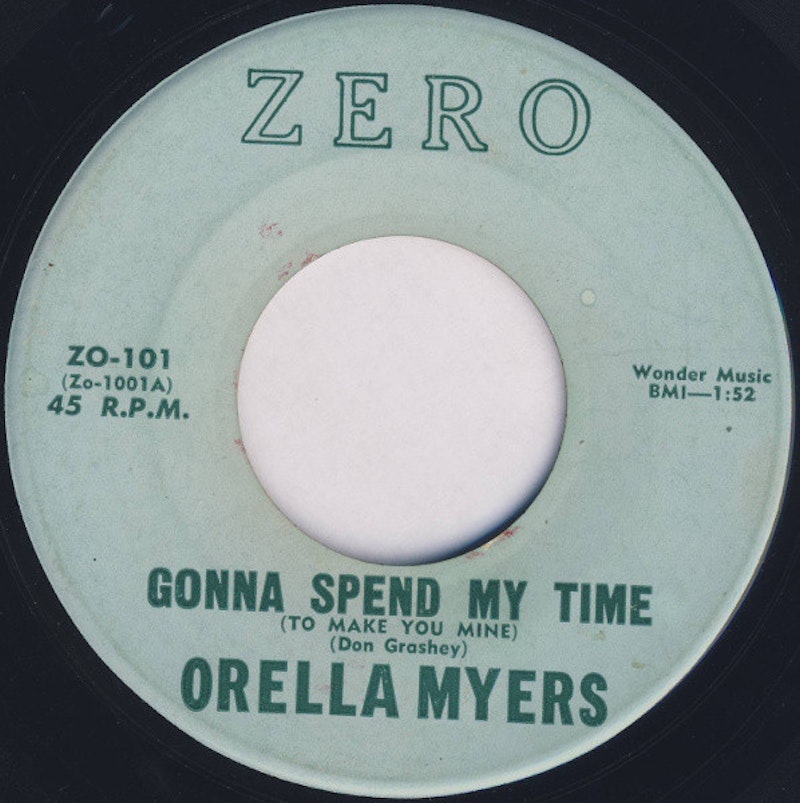 Several Buffalo Bop releases focus on recordings made by women and girls. These will be a hard sell for casual 1950s music fans expecting to hear the era’s bouncy femme-led pop a la Connie Francis or Teresa Brewer. Branded with sleazy titles like Tough Doll, Desperate Dolls, and Restless Doll these compilations continue the label’s ridiculous formula of cover graphics filched from vintage adult paperbacks and crime film posters paired with schizoid track lists that are rarely ever as seedy as those images suggest. One of these discs fully transcends the cheese factor: Candy Doll is a collection that documents more than mere historical footnotes with a lineup of artists that stand as some of the earliest and best progenitors of contemporary Americana, country rock, and punk.

Canada’s Orella Myers and Ohio-based teen artist Sunnie Lee turn in declarations of self-confidence delivered by voices that shake with desperation and fear. Vulnerability is a risk in any romance and that danger is palpable in the off-key wail that Lee throws over a country rock racket called “Puppy Love” (no relation to the Paul Anka hit of the same name); this jaunty cut wouldn’t sound out of place on a late- 1960’s Byrds album or one of Brandi Carlile’s more recent efforts. Myers is the more technically accomplished singer yet her intense vibrato on “Gonna Spend My Time (To Make You Mine)” gives her vocal the same conflicted emotional dynamism found in Lee’s performance. A thin layer of distortion coats both songs. The frayed soundscape was most likely unintentional, probably the result of a full combo and vocalist recorded in a small room with few microphones. A shoddy vinyl-mastering job could be blamed for sonic damage.

Lo-fi and hi-fi, emotional confusion and earthy drama—these were dichotomies that Bob Dylan would explore on the seminal albums John Wesley Harding and The Basement Tapes. Michael Hurley, The Nitty Gritty Dirt Band, The Flying Burrito Brothers, and similar innovators probably never heard either Orella Myers or Sunnie Lee, but nonetheless both artists embodied early country rock’s balance of sonic intensity and backwoods crooning. The distortion heard on these singles reminds us that the poetic universe inhabited by Dylan and countless other American singer-songwriters would’ve been nothing without rural folk music and the blurred fidelity that gave it a veil of mystery.

Noise overload was no accident on the two Candy Doll tracks from Nancy Day and Dottie Jones. Day’s “Teen Age Hop” fuses bubble-gummy vocals, echo effects, and whimsical honky-tonk piano with a brain melting rhythm section slashing out annihilated guitar tones in the finest Link Wray tradition. Rumbling beneath it is a jet-propelled drumbeat the likes of which would rarely be heard again until The Ramones and New York Dolls rose to prominence. This was Nancy Day’s only release and it came out in 1958 on the Jay Wing label of Stevenson, MD, an area near Owings Mills and Carroll County. There must’ve been something in the water: decades later a crazy mix of pop whimsy and noisy/lo-fi production would define the music of Yeasayer and Animal Collective, both initially based in the Stevenson area. Carroll County was home to The Beggars, the most brutal Link Wray-obsessed punk band ever to come from Maryland (their lone 1966 recording “Night Of Pleasure” can be found on Dome Records’ lo-fi various artists LP Baltimore’s Teen Beat A-Go Go).

In 1956 TNT recording artist Dottie Jones—billed here as “Dottie Jones (The Pride Of Texas)”—released “Honey, Honey,” one of the Lone Star State’s earliest rock ’n’ roll records. It starts off simple enough as a chunky swing time blues rocker with some Cash-esque muted guitar scratch, but once the solo break kicks in we’re back at the altar of Link Wray. The jarring distortion of this solo rips out of the speakers like a bomb blast, the ultimate climax for a tune that centers on Jones’ breathy erotic pleas. Her performance here is on par with anything immortalized on the scandalous records from Chess, Sun, Fortune, and other legendary 1950s rock imprints. Information on Jones is scarce, but her label TNT (aka Tanner ‘n’ Texas) had several other significant releases including two stellar teen rock 45’s by The Delatones and an interesting 1969 album by garage band The Moods.

Misty Bonner’s 1962 Atlanta Records single “I Can't Sit Still” b/w “Watch Me Do The Twist” is here in full and it’s a major document of punk’s infancy. From Janis Joplin to Wendy O. Williams to Kathleen Hannah, their voices all pale in comparison to the demonic screech of this Arkansas banshee. “I Can’t Sit Still” in particular boggles the mind with a weird compressed reverb effect that pops in and out of the track emphasizing the most atonal parts of Bonner’s performance as her sloppy back-up combo of adrenaline junkies buzz with a relentless piano abusing stomp-a-thon.