Evergreen in the Endless Summer

The Infinity Mirror Tricks of The Beach Boys. 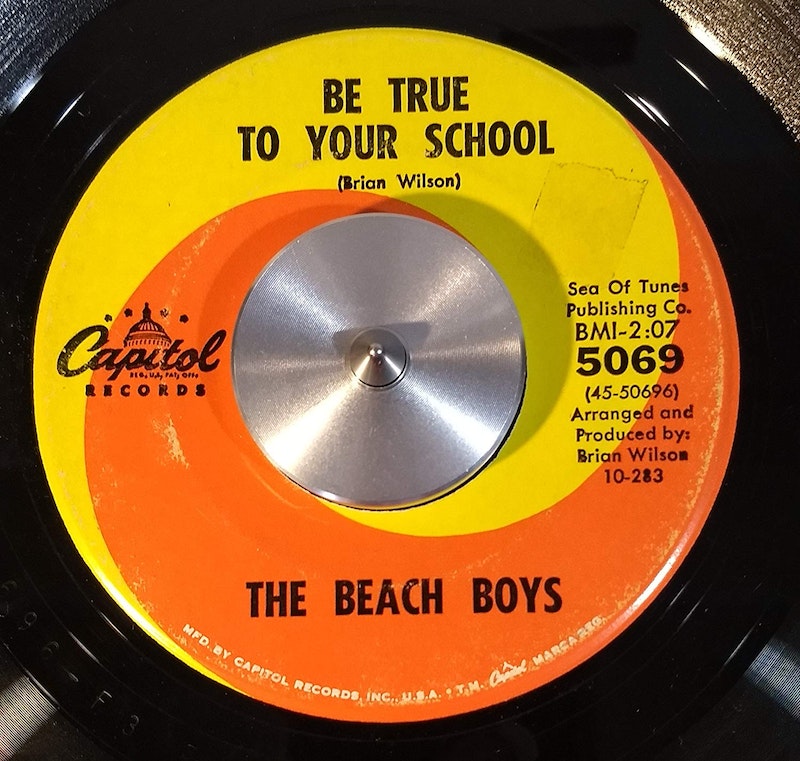 Sometimes the spotlight can’t locate the lead among the seven voices as they trade sacrosanct but secular melodies between the palms during The Beach Boys’ three-hour performance at the Majestic Theatre in downtown San Antonio on March 19, 2019. For the next two minutes or so, the lead vocalist happens to be Mike Love, the 78-year-old shipmaster of America’s Band. Love sings a teenage tune with a teenage voice, while sporting a retiree at ease look: ball cap, shades and a white goatee that glows once the spotlight locates his teenage soul.

It’s eerie to hear to hear such a pure rendition of “Be True to Your School” 50 years after its initial release. As soon as they hit the airwaves with golden-ray tunes like “The Warmth of the Sun,” The Beach Boys were frozen in eternity, our national psyche haunted ever since. To this day, they stay evergreen in the endless summer, due in part to the yin-yang interchange between the industrious impetus of Love and the lazy luminescence of Brian Wilson. Due in part, more so, to the fixed bright heights of their complex harmonies and the aforementioned sacrosanct melodies. “Don’t Worry Baby.” “In My Room.” “Help Me Rhonda.” “California Girls.” “Good Vibrations.” Tonight, they pop them out like bubblegum, lofting light and breezy verses from their surfin’ so-phony California. Far from escaping or deforming reality, their music, through recreation, speculates the geography of the getaway, shaping secret coves with secret chords. Kokomo, then, exists as a physical place I’ll never visit and a musical space I can travel to free of charge as a listener, anytime.

Age ensures that everything, including evergreens, art and people, comes to an end. Love, who banters between songs like a Clint Eastwood practicing transcendental meditation, dubbed this the “Now and Then” tour, its meaning made apparent through the archival footage projected behind the band. Photo stills, animation and video moved in and out of temporal sync with the songs. Back when television and The Beach Boys caught a wave, the mere broadcast of a live event was enough to draw an audience. Nowadays, The Boys have to deal with a lot more: Yards of footage in the vaults and a media-groomed crowd that expects more than just a live performance. So, Mike Love sings with Mike Love who sings with Mike Love. John Cowsill drums with Dennis Wilson who drums with Denny Wilson. Infinity mirror tricks.

Nostalgia is a four-letter word in my dictionary. I’ll fathom nostalgia right after my trip to the real hold-it-in-your-hands Kokomo. When Beachheads and pop critics claim nostalgia waters the band’s Fountain of Youth, I don’t buy it. “Little Deuce Coupe” is no vehicle for time travel, “I Get Around” is no travel package blast to the past. The secret juice in their Fountain of Youth is revealed every time they interweave and interlock harmonies when they sing, a cappella, “Their Hearts Were Full of Spring” by The Four Freshmen. The secret chord that David played and it pleased the lord, the sequence of notes on the violin that Genesis P-Orridge never played with Throbbing Gristle, the glossolalia that Antonin Artaud found after his theater of cruelty, the motives behind St. Hildegard of Bingen’s Lingua Ignota still unknown. While others find truth through babble, the Beach Boys find it through accord. Harmony provides them with a clean, direct route to the experience of eternity.

By the time Bruce Johnston croons “Disney Girls” and John Stamos swoons “Forever,” they’re just rubbing it in. Then Stamos chokes up with tears when he tells the crowd he’s recently become a father. At this point, I can’t gauge if his tears are Kokomo tears or “Kokomo” tears, and that’s okay. We’re dealing with absolutes here, not with geographical facts; we’re dealing with pure immersive fantasy fixed in now, then, whenever.

In the meantime, before eternity ages, we have two reincarnations of “The Beach Boys” to enjoy: Mike Love and Bruce Johnston’s band with musical director Scott Totten, and Brian Wilson, Al Jardine and David Marks’ band with musical director Darian Sahanaja. After that, lucky us, we’ll buy tickets to see their holograms in a reunion of the entire surfin’ safari tribe. The video ghosts of Carl and Dennis will join the rest of the family in an act of perpetual hypnotism through complex harmony where now becomes then becomes now, our psyches still trapped inside that snow globe on the cover of Keepin’ the Summer Alive.