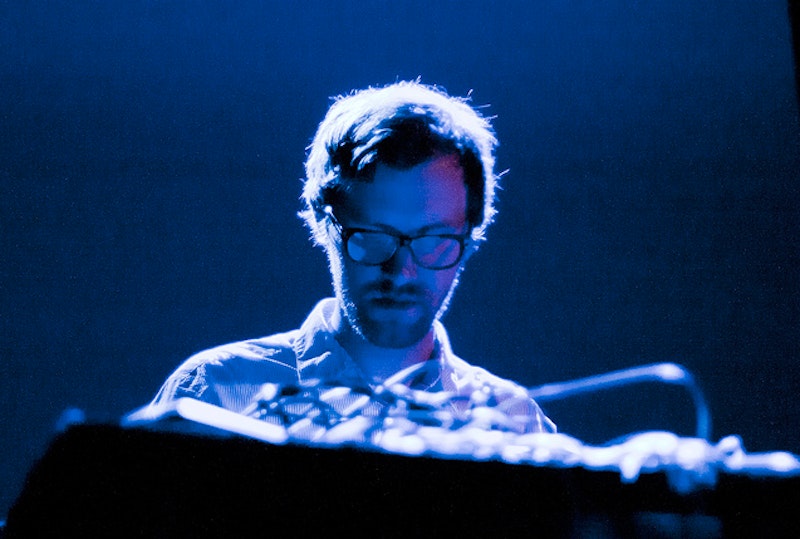 When we think about record-breaking in terms of recorded music, we usually measure it in terms of units sold or downloaded, in the size of attending crowds, in decibel maximums. It’s hard to know what to think of the fact that solo, in collaboration, or in groups, California noise wizard John Wiese has his name on more than 100 vinyl 7-inch singles; it kinds of boggles the mind, a significant milestone that’s nonetheless kind of nebulous in a world when full-size vinyl remains the hipster format du jour but 7 inches aren’t much talked about. Wiese celebrates turning 100 with a book of 7-inch covers and essays (100 Seven Inch Records By John Wiese) and a gallery show at Family 436 in Los Angeles that runs from October 17th through November 8th, where visitors may gawp at 100+ displayed Wiese-related 7-inches. The rundown of single titles quadruple-underlines his centrality to the underworld of noise and extreme music, how involved he is: dude has ripped scree with everyone from Merzbow to C. Spencer Yeh to Yellow Swans to Metalux to Lass Marhaug. He gets around. Wiese answered a few emailed questions about crossing this particular threshold.

SPLICE TODAY: Do you remember what some of the first seven inches you bought were, and what drew you to them?

JOHN WIESE: I think the first 7-inch I remember buying was "Funky Town" by Lipps Inc. I remember buying 7-inches as a kid at Venture before they packaged in "picture sleeves." I was always drawn to collecting recordings, but I don't recall any particular affinity to 7-inches until I got into punk bands, which was around third or fourth grade. When I was in high school I did a 7-inch-only distro. At that time basically all 7-inches were $2 wholesale, so I could buy five copies of anything for $10, keep one, and sell the rest for $3 each.

ST: Move enough at a high enough volume, and that's a tidy profit.

ST: Releasing 100 7-inch singles seems like a rather unusual accomplishment for one artist; I'm not sure whether there's any precedent for such a thing. Is this something you were aiming to do, a goal you set yourself, or did it just kind of happen?

JW: It wasn't a goal, but around five years ago I realized I was going to at least hit that mark. As I type this I'm up to 106. I guess the only thing to do to celebrate releasing 100 7-inches is to release more.

ST: Have you considered reissuing them, either in original form, digitally, or as some sort of mass package/endurance test?

JW: There are digital versions on my website, and I'm slowly adding more and more. There are also a number of CD collections of 7-inches: Teenage Hallucinations, Soft Punk, Gore Jet, etc. I’m working with Gilgongo on a collection of all of Sissy Spacek's noise-core 7-inches on one CD now.

ST: What are a couple of favorites you have among your 7-inches, and why?

JW: I think they've gotten better over time, but there's something unique in each that I can appreciate. I also like 7-inches because they seem more like an idea than an album: in a way less fixed, more like a possibility.

ST: Do you have personal copies of all 100 singles?

JW: I do have an archive, but everything is in storage, so it was a little difficult to find all of them. There were a couple I had to borrow to photograph and for the exhibition. They're probably just hidden in a box somewhere.

ST: How did this exhibition come together? I also understand that there's an associated book that's coming out soon.

JW: Family asked if I would be interested, and of course I was. I had just assembled all the records to photograph for a website, so that easily translated into a show and a monograph. The book has essays from Sam McKinlay [of The Rita] and Brian Roettinger.

ST: I remember how, back when I used to hang with quasi-punk kids and buy MRR, that seemed to be the primary mode of currency for music; you'd have like 50 label/band ads and 90 percent would be flogging 7-inches. I never could get anywhere near as excited about all things vinyl as other people.

JW: Maximum Rock’n’Roll was definitely a revelation for me, and later, HeartattaCk. I would basically order anything that looked interesting. Everything was $3ppd. I remember when I put out my first 7-inch, it was right when things were crossing over to $4ppd, and it was kind of a big deal. It’s amazing to think that every show I went to in the 90s was $5, and things haven't changed with inflation in over 20 years. Not really a positive thing.

ST: In throwback commodity terms, do 7-inches have the cachet of larger vinyl slabs and cassettes at this point? When you put out solo or collaborative releases or stuff on Helicopter in various formats, do people tend to gravitate to one specific format?

ST: Who, in your opinion, is making rewarding, challenging music these days? In terms of artists or labels.

JW: All the artists and labels that I know of.

ST: Tell me a little about your recent GGA ep. What does the title mean, and how did this series of recordings come about? It's an interesting concept, the jump cuts of shattering glass, it has the effect of intriguing and unnerving the listener in equal measure. What was being broken?

JW: GGA ended up being a sort of puzzle. Cali deWitt had been offering me an LP release for a while, and I wanted it to be something really specific, because he does such a great label. He's also a really inspiring photographer, so I wanted to use some of his photos on the release. He had this idea about me spray-painting the title of the release on a wall, which I thought about for a while, and remembered that when I was in junior high I used to stay over at a friend’s house and sneak out in the middle of the night. The one and only time I've ever spray painted a wall was writing "GG ALLIN" in a drainage ditch at three in the morning in St. Louis. So I was thinking about a photo catching me in that act, and then I started to think about "GGA" as both the start of the phrase and as GG Allin's initials. We abandoned the original photo idea, but that was the origin of the title. To me, the album is a cross between nihilism and a party record, but simultaneously hilarious and romantic, so that's where the tracks titles came from—“Laugh Therapy” and “All Heterosexual Sex Is Illogical.” The photos that we used were an extension, and then all seemed to come together for me. The audio is a stereo mix of a 4-channel original version. It's made from windows that I broke and recorded.

ST: Do you still buy new 7-inches? And is there even a modern analogue to MRR where you can find out about all this stuff?

JW: I'm getting more records than ever. And ever since a regretful trade when I was in junior high, I keep almost every record that I get. Unfortunately, the Internet has replaced print in terms of announcements/advertising and has helped create a really severe attention deficit disorder among the interested audience. Now you basically have one bang to make your sales and then it's old news.

ST: It's rough out there. And on top of that, the noise scene by its very nature doesn't have much of a promotional infrastructure, so stuff is constantly coming out that's visceral and crucial but unless you're clued in or someone's keeping you in the loop, it's possible to not even realize that your favorite artists are releasing stuff until months after the fact. Someday when I have time I wanna start a blog that just lists noise release dates or recent-ish releases for people like me who have a hard time keeping up.

JW: You should do it!