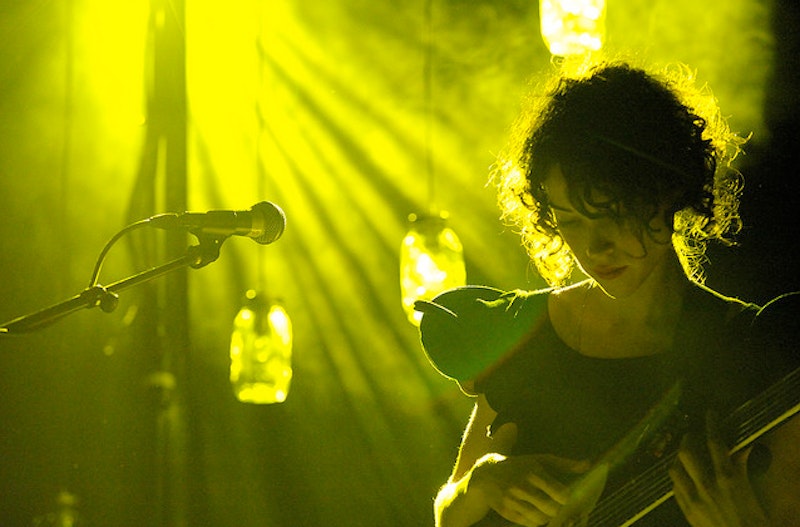 Imagine Jimi Hendrix's or Jack Black's guitar, Björk's emotive presence, Jeff Buckley's swan-like swoons, PJ Harvey's fem swag, David Bowie's pastiche, Nick Drake's soft repose, Trent Reznor's intricacy—then throw in some Prince, Billie Holiday, Cat Power, Tori Amos—and you have St. Vincent in her masterpiece Strange Mercy. Initially just a partial fan (partly due to her Atlantic Sound live performance of Nico's version of "These Days"), I downloaded the album from iTunes one evening before attending to the dishes with my headphones on. This was two weeks ago. I've been obsessed with the album since.

"Cruel" is the easy hit, with its steady beat, tight riffs, and soaring vocals. Listening to it, I feel kid-like and oddly excitable. A conventional ballad, the beautiful "Champagne Year" is already being covered by earnest fans on YouTube, their voices straining to grasp the hymnal notes of St. Vincent (real name Annie Clark). "Neutered Fruit" starts with syncopated drums in an unconventional measure, finding space between her vocals, then accelerating into the song as the melodies verge into one graceful sigh. The best song is the title track "Strange Mercy," with it spare vocals over a simple drum loop, through hollow minor chords raising up to the most haunting, somewhat melodramatic synthesizer riff—which points to the intelligence of St. Vincent's nostalgia for the 80s. Her approach is playful, yet solemn and without too much irony. Many deft musicians (Beck, for example) are too self-conscious of their musical fluency; there styles quickly become "performative"—whereas St. Vincent (similar in this regard to Peter Gabriel or David Byrne) seems able to organically consolidate all her influences into a new form, a subtly which isn't cloyingly unique. They are simply pop songs in the end, after all. This is not to disparage them, but to honor what that style can do.

She sings If I ever met that dirty police man who roughed you up/no I don't know what in the title track. It's a provocative allusion. I wonder if this concerns civil rights, racism, feminism, or some autobiographical account unknown to listeners; her politics are oblique, but you know something is brewing. She is earnest, yet there is a distance in her songs and stage presence. She tends to stare ahead of her, perhaps into the song. In "Cheerleader," she begins, I've had good times/with some bad guys/I've told whole lies/with a half smile—an invocation to some hearts she may have broken along the way. It's a formidable set of songs, scintillating, never fully understood. The album is a jewel, an intimate mystery offered by one of the most exceptional musicians working today.