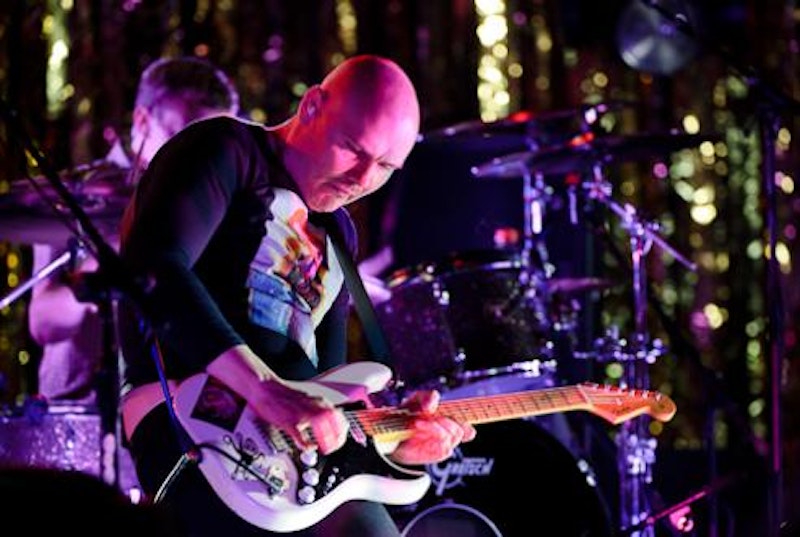 On the bus to New York two days ago, I had a hard time figuring out if a trip from Baltimore to see the Smashing Pumpkins at Terminal 5 would be worth it, for every predictable reason. Even though recent set lists have been the best since the mid-90s, and the new songs from Oceania don’t sound half-bad (at least compared to Zeitgeist aka Shitgeist), there’s no getting around the fact that SP hasn’t been a band holistically since 1996—and the randoms Billy Corgan has with him now may as well be Chuck-E-Cheese animatrons. With no connection to the history of the band and with even less power in Bill’s dictatorship, they may as well have been in disguise, Residents style. Eh, eh, okay—but they’re playing “Geek U.S.A.” on this tour. And “Muzzle.” And “Starla,” “Thru the Eyes of Ruby,” “Soma,” “Frail and Bedazzled,” “Siva,” “Window Paine”…bleuuuurmn OK. $100 on Stub Hub, lessgoooooo.

After walking the wrong way on W. 56th St., miraculously I got into Terminal 5 right as King Pumpkin and Co. went on. New songs “Quasar” and “Panopticon,” especially the former, were glorious reminders of what this band used to represent: propulsive, kinetic, psychedelic, powerfully enervating rock music. Oozing octave chords and liquid leads against cannon drums, “Quasar” is perhaps the best thing Corgan’s done since early Zwan, and all that we Pumpys nuts can do is pray that he doesn’t ruin a great song in the studio as he’s done post-Adore. If Oceania is as tonally powerful and well-rounded as the live set, the only thing Bill could possibly ruin are his vocals—and against all odds, he sounded great on Tuesday, no vibrato and he nailed all his consonants! Any Pumpkins fan who’s paid attention throughout the reunion knows how sweet that sounds. Oh yeah—no rants either. Corgan didn’t say a word to the audience for most of the show.

Again, tonally, this was probably one of the best guitar rock shows I’ve ever seen. Smashing Pumpkins tone is the pinnacle and logical endpoint of how to do rock guitar. It’s perfect: the gooey, shimmering phased intro to “Ruby,” the gargantuan molten throb of “Cherub Rock,” “Geek,” and “Silverfuck,” the metallic rainbow twang of clean Strats in the middle section of “Oceania,” the fuzzy nasal wail of the solo in “Starla”… even though Corgan’s songwriting and strategic intelligence have diminished, he remains one of the best players active today. With such a vast catalogue of songs, he’s made a career out of fully exploring and studying the guitar, and has far outperformed everyone of his generation, yet his big mouth continually betrays him against an unqualified legacy. No matter—if he can make middle-aged dudes and their wives mosh and satisfy his true fans with brilliant set lists, the music crits will come around sooner than later. Bill probably feels more comfortable amongst his bald-headed brethren, anyway.