Stefan Goldmann's 17:50 and Electronica for Infants 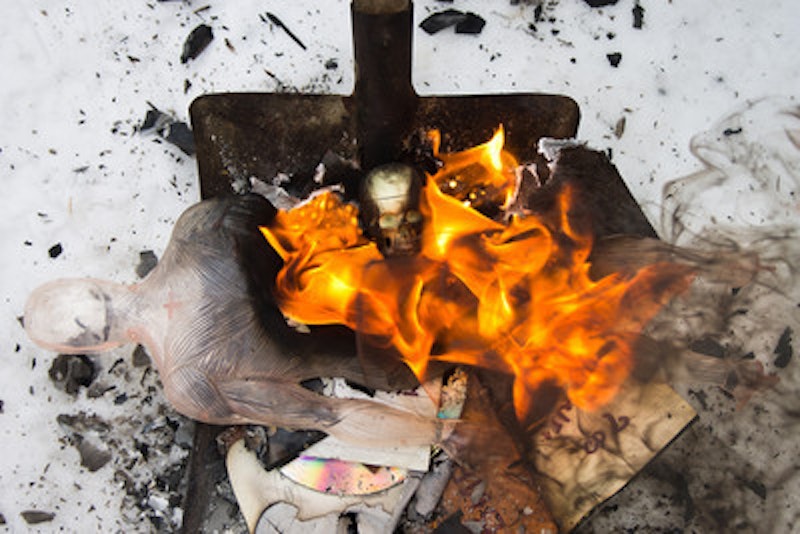 I put on Stefan Goldmann's new album 17:50 in my car, and my eight-year-old was delighted. "This is great," he said confidently. "You should play this all the way to school."

It's not a real surprise that my son is into electronica. In the first place, he's long been a fan of Kraftwerk. While driving the eight-10 hours from Chicago up into the hills of Kentucky to see the in-laws, we will sometimes dispense with the context-appropriate Waylon or Willie, and instead go for the Man Machine. There's nothing like driving up a 45-degree incline behind a coal truck while shouting, "We are the robots! Bloop-bloop-bloop-bloop!" at the top of your lungs. (You can vary the end "Old MacDonald" style. "We are the robots! Quack-quack-quack-quack!" Or "Oink-oink-oink-oink!")

But setting aside the effect of early indoctrination, I think there's still plenty of reason for kids to like Stefan Goldmann-style cerebral electronica, because it really sounds like it should be kids music. Dance-party electro-disco has a sweaty, sexy vibe—even if you don't have some Donna Summer wannabe shouting orgasmic endearments, it's clearly for adults. But when you start to get away from those house beats, electronica can start to sound positively infantile.

That's certainly the case for Goldmann's album. This is music designed less for getting down on the dance floor than for squirming and giggling. "Rigid Chain" has that computer-game funky cuteness, like Pac-Men spasmodically spinning across your screen, and then part way through you start to get someone banging haplessly on a tin pot, as if the toddler has gotten into the bottom cupboards again. "Manila Grind" has a maddening high-pitched electronic figure repeating and repeating and repeating, which actually sounds like one of those hideous musical toys for young children that you curse the grandparents for purchasing. "Dead Cat Bounce" is built around an itchy, tapping-on-the-wall beat and an electronic distorted "meow," as if someone is naughtily pulling on the robot cat's tail.

It's not just that the music sounds like it's being played on toy instruments that make it seem especially appropriate for children, though. Rather, it's the whole aesthetic of sexlessness; the hapless, honking cheer. The result is perhaps analogous to Ornette Coleman's music, with its air of tentative wrongness—a disembodiment so severe it starts to look like incompetence. The cerebral refusal of visceral "oomph" leaves you with a kind of questioning or giggling "ook!" If you're not posturing like a man and you're not strutting like a woman, then all that's left for you is pre-pubescence. In Goldmann's music, computers become children through the simple expedient of having never gone through adolescence.

There are exceptions, of course. "The Empty Suit" opens with sustained-tone whining that seems more at home in a crib than on the dance floor—but the bulk of the track, has more of an urgent, laser-zap edge to its bleeping, and sidles up closer to a house beat, so that at moments you can actually imagine mannequins attaching their genitals before moving out to get down. And then there's the final track, "Kampong Pressure,” which isn't exactly danceable, but has a measured vibe, more tripped-out hippie grooving than blissed-out-three-year-old-stumbling.  At least until the very end of the track, where that hippie seems to lose the beat and the music starts to stagger and hollow out, leaving a fading kazoo of a melody and someone banging along uncertainly off in the background. The arty ending, the clever smart-guy fillips, can also come across as an abandonment of skill, the drooling spastic genius of a baby built from diodes.