Don't Let Me Lose This Dream

The tale of Shit Horse. 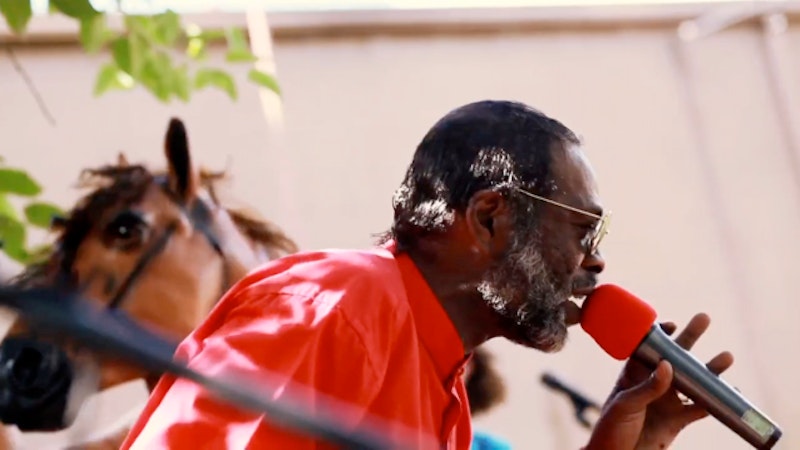 The best thing about being in a band is imagining the famous people who’ve used the bathrooms backstage before me. David Byrne, I think when I'm peeing at the Cat’s Cradle. And Jack White and the Yeah Yeah Yeahs and people I've never heard of but who are probably really talented musicians with lots of fans and maybe even awards and money. I'm not a musician at all, much less a talented one with fans or awards or money, but I get all the benefits of being in the band, like free beer and peeing in the same place as famous people. The band, Shit Horse, started as two guys with guitars and amps playing impromptu sidewalk shows, sending their girlfriends into bars to get drinkers off their stools and outside to watch. As a duo, Shit Horse played the occasional club or house party for free booze, rarely advertising shows because they were rarely planned. Two years later, Shit Horse has picked up a drummer, a vocalist, and me, the dancer. In truth, I’m not a good dancer. I quit ballet as soon as I realized that you have to practice to be improve and I have as much rhythm as Ira Glass break dancing, but my moves are less important then what I wear; that is, not much. My costume is a horse mask and running tights, and I’m topless but for pasties covering my nipples.

I got involved in Shit Horse because I drink a lot, and when I drink, I'm agreeable to any suggestion. Would I like to jump over that fence and try to ride that Jersey cow? Of course I would! Shoot fireworks off the roof of the police station? Absolutely. Race down a huge hill on a kid’s bike with pink streamers? Yes. Let me put down my drink and let’s get started! That's how I ended up in Shit Horse. The original two members approached me about being their horse at a bar one night. Would I like to dance topless in a horse mask? I vaguely remembered the conversation after I woke up cloudy and hungover the next day, but I figured this was just another idea that would be lost in the drunken ether, and so I was surprised when I got a call a few months later that we would be playing our first show together that night.

I was very, very nervous that first night. I had never heard the songs and I was about to dance topless in public, but nerves are an excellent excuse to get drunk, and so I did. Besides, when you get paid in booze, it's easy to drink until the cooler onstage is empty and then get more because you're in the band and that's your fee. At that first show, I got so drunk that I lost my keys, my wallet, my phone, and most of my clothes. Afterwards, locked out of my house, I knocked on my girlfriend’s door wearing just tights and pasties with the mask still on my head.

I don’t get nervous anymore before shows anymore and I no longer need to drink before we play, but I drink anyway because what better excuse is there besides bachelorette parties and funerals? I’m onstage during the first song and again during the last. I prance like a pony, wave a plastic machine gun around my head, and bang into things on stage because it’s really hard to see in the mask. I've added small bits to my performance—I step on shoes and spill drinks in the crowd now instead of just on stage. I've added suspenders to my costume and I'm slightly better at maneuvering in the mask and every once in a while someone will spray me with beer, which is refreshing for a moment but afterwards I have to clean myself with hand soap and paper towels.

Shit Horse has started to get attention, and not just as a weird local band with songs about equine digestion. Besides playing actual venues for actual paying crowds around here, Shit Horse has played in New York and Austin and a European tour is in the works because a dj on BBC 6 is a fan. The attention is in large part due to Danny Magic, the possibly drug-addicted vocalist. I say possibly drug-addicted because it's hard to tell if Danny is always or never fucked up. People say—and want to believe—that Danny is also homeless and illiterate, but this definitely isn’t true. I don't know Danny's drug habits, but I do know that he has a permanent place to sleep in the basement of a bar, so he's not really homeless. I also know that Danny is not illiterate, he's just a shitty speller.

I tell people that Danny is a 51-year-old man with the stage presence of James Brown, but I want to tell people that Danny is a 51-year-old black man with the stage presence of James Brown. It seems tactless—if not racist—to mention that Danny is black, as though his race make him a novelty, but it's also part of what makes Shit Horse interesting; three white guys in their 20s, 30s, and 40s, a topless horse with a machine gun, and a 51-year-old black man in a drum major costume. Shit Horse, with Danny on the mic, still plays small venues and house parties for free booze—last weekend we drove 40 miles to play a show for 20 underage kids in the basement of a house with graffiti on the walls, an illegal fire pit in the backyard, and a floor you shouldn't walk on without an up-to-date tetanus shot, but we’re also playing shows with double-digit ticket prices and crowds in the hundreds.

My one complaint about Shit Horse is that our audience is mostly dudes. As a lesbian, I wish taking my top off in public would get me attention from women on occasion, but not that many women go to see Shit Horse. The attention I do get isn’t what I’m looking for, but you can’t really complain that drunken dudes hit on you when you’ve been nearly nude on stage in front of them. It’s expected. After the shows, I make my way home, where I'm sober and unadventurous and sit on my couch a lot. It's not uncommon for me to speak to no one but coworkers and the pizza delivery guy for days, but I have Shit Horse to look forward to on those days, waiting for our next show so I have another excuse to drink beer and take of my shirt and wave my gun around. Maybe one day we’ll be so famous that people will say they saw Shit Horse playing on the street when it was just two guys or were one of 20 underage kids watching us in a tiny basement, but even if that never happens, I can still say that I was in a band for a while, topless in front of hundreds, with free beer and a well-graced toilet to use.