Songs I want played at my funeral. 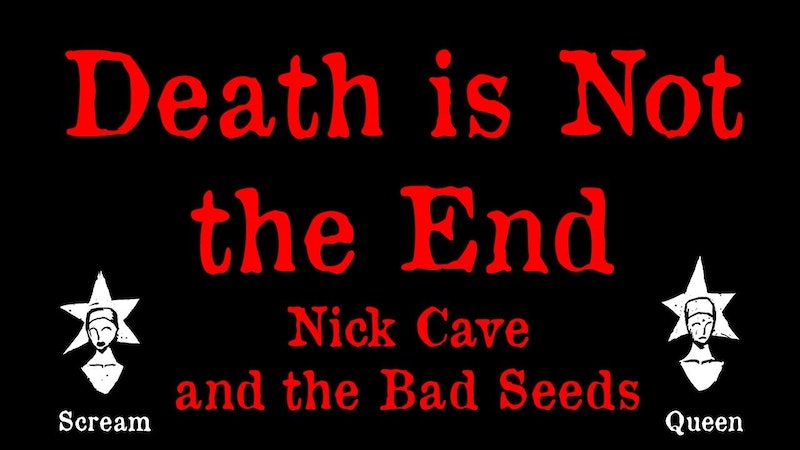 My friend Ru Callender is an undertaker. He wrote a marvelous book, published earlier this year, which I reviewed for Splice Today.

Callender knows as much as anyone about death and its implications and is a good guide to what we should think about when planning our own funeral. “Don’t!” he says. One of the stories he tells is about his mother’s funeral. She left a set of detailed instructions which left her family very little to do. At the top of one page—a definitive list of music and readings—she added a personal note. “Bossy boots still at it,” she said.

Callender’s funeral style was developed, to some degree, as a reaction to this. He thinks that the funeral is much more about the mourners than the dead. He says: “If you are asking me now, as an undertaker, whether you should plan your own funeral, I will say no. Leave that to the people who will be performing it. It is for them.”

When my Mum died the four kids got together and made the funeral arrangements. Choosing the music was particularly gratifying. We picked Bridge Over Troubled Water by Simon and Garfunkel, Unforgettable by Nat King Cole and Morning Has Broken by Cat Stevens. The songs worked well both because we knew our mum had liked them, but also because they reflected our feelings about her. The narrative arc, from our own heartbreak to an affirmation of our mum, to the optimism of a new day, is perfectly expressed in these songs.

Callender says: “Say what you have to say while you live, but let go of the bit right after. Let your family and friends decide what is said about you. They know a side of you that is impossible for you to know yourself, and they need to acknowledge that side and say goodbye to it.”

Nevertheless, I’d like to intervene in one aspect of my own funeral. I’d like to pick the music that’s played. There’s nothing that tells you more about a person than the kind of music they like. It’s not that I’m telling my family what they must play at my funeral. Let’s face it: I won’t be around to argue if they choose something else. But I’d like them to listen to these songs, at the very least, to savor them, as a reminder of who I was. With this in mind, following are some of the songs that I’d like to be played at my funeral.

Ripple by The Grateful Dead. The Grateful Dead are the definitive live band. They honed their skills as live musicians by being the house band for Ken Kesey’s Acid Tests in the mid-1960s. They developed an almost telepathic relationship to each other that allowed them to endlessly extemporize, to extend, to explore, through live sets that could go on for hours. There’s no song in the Grateful Dead canon that isn’t better as a live performance. With one exception: “Ripple,” from the 1970 album American Beauty.

It’s less a song, more a manifesto, a guide on how to live your life in the face of our ultimate aloneness. It was written by Robert Hunter and Jerry Garcia and its chorus is like a Zen koan.

It’s a line that sums up the mystery of life. It could’ve come from the Tao Te Ching. It’s a delicate phrase which says nothing and everything. It shows how clumsy most of us are in our formulations about the meaning of existence. Say you believe in God or the afterlife, and I’ll scoff, but sing about a ripple in still water, and maybe I’ll listen, maybe I’ll know what you’re talking about.

There’s another line I love:

Let it be known there is a fountain
That was not made by the hands of men.

We are so arrogant, us humans. We came from nowhere. We will return to nowhere. All our myths about the Afterlife are attempts to extend our Empire into the realms of the unknown, but really we know nothing. Nevertheless there is something there, something beyond us, something “not made by the hands of man” which is the source of our lives. That’s what this song celebrates.

St James Infirmary by Louis Armstrong. This is a song that should be played loud: so loud it rattles your ribcage and makes your eardrums thrum. It’s about death, in all its sweet mournfulness, with all its sadness and sense of loss, but with a note of pure joy in there. Death and joy at the same time. It’s the original blues tune, slow, stately, meant to be played at a walking pace, at the funeral cortège as the mourners parade through the streets with the coffin, led by the funeral director in an elaborate, stepped dance, like Papa Gede, the corpse of the first man who ever died.

Ideally I’d like it played by a proper New Orleans jazz band, except it would have to be led by Louis Armstrong, that gravel-voiced angel from the Otherworld, so inherently himself that no one could ever mistake him for anyone else. I’d like the spirit of the long-dead Armstrong to accompany me at my funeral but, failing that, I’d like this song to be played. Listen to that old Satchmo chuckle when he says “braggin’.” It’s a joyous affirmation of life. Listen to the tone of his trumpet. No one made the trumpet sing like Armstrong. Listen to the high notes at the end. Imagine the amount of breath it must’ve taken to create notes that high, how it must’ve strained his lungs as he reached up to the stars. The song is about death, but that trumpet is a confirmation of life.

Air by The Incredible String Band. It’s from the Incredible String Band’s fourth album, Wee Tam and the Big Huge, released in November 1968. This song isn’t about death, it’s about life. It’s about what makes us alive. It’s about that most ephemeral of human responses: the breath. I’d want this played, not so people would remember me, but so they would remember themselves: the fact that they’re alive, that they breathe. This is the miracle, this simplest thing, this nearest thing, this deepest thing we’ll ever know in our lives.

There are exactly 33 words in this song, each one perfectly placed. It has the air of an old-time hymn, except that it’s sung in praise of nothing so abstract as “God.” Rather it’s a hymn of praise to something we all share. As it says, “breathing, all creatures are.” All creatures, that is, not just humans. It’s what holds this ever-moving, ever-changing, ever-exploding chaotic dance of creation in its embrace: the matrix, the mother of all beings, the breath. Mike Heron’s voice is so intimate, close and warm. He’s using his breath to create this perfect illusion. It’s as if he’s beside us, breathing into our ear. It’s perhaps the most intimate song ever written, about the most intimate of subjects.

Death Is Not The End by Nick Cave and the Bad Seeds. I think the fact that death isn’t the end is self-evident. The body dies. The individual dies. The heart stops. The brain atrophies. The flesh rots. The breath of life is taken from us, but all around us life continues to bloom. Is there life after death? Of course there is! When we die, life goes on. The song was originally written and performed by Bob Dylan. I prefer the Nick Cave version, first because it was the first I heard, and then because it has a variety of voices, including Kylie Minogue and Shane McGowan. I think Kylie Minogue singing breathily in your ear as this song develops is one of the sexiest sounds imaginable.

I first heard it in Harghita county, in Transylvania, Romania, where I’d gone to live in 2007. It was a Hungarian-speaking region. I was living by myself high up on the hillside above a remote village, among people who spoke very little English. A couple of the local notaries came to visit me, an artist, and a government minister, and we drank cheap, potent red wine. We were having difficulty communicating until this song came on. I’d ripped it from an LP my sister loaned me, but I’d not listened to it before that evening. Once it was on, my guests wouldn’t allow me to take it off again. We played it over and over, toasting each other and singing along with the words. Despite their lack of English everyone knew what they meant.

I like it because it’s an exercise in the craft of writing. The words are simple, but, once the pattern is established, Dylan, as the writer, pursues them to their logical end. The word “end” ends every verse, and he spends his time looking for rhymes for it. So we have “mend,” “comprehend,” “bend,” “descend” and so on, each with a perfect little sentence to accompany it. You can see the work in it, in the development of every line. And yet it remains profound and an affirmation of life at the same time.

There are a few other songs I might’ve chosen to include. Nightingale by Leonard Cohen. Moanin’ at Midnight by Howlin’ Wolf. I’ll Fly Away by the Kossoy Sisters. My Favorite Things by John Coltrane. The Mingulay Boat Song by Richard Thompson. At least a dozen songs by Bob Dylan and almost anything by Miles Davis or Robert Johnson. But we have to draw the line somewhere. Perhaps you’ll think this has been a morbid exercise, an article about death, but if you think that, then maybe you have missed the point.