His new book on Bob Dylan is a bit too elegiac. 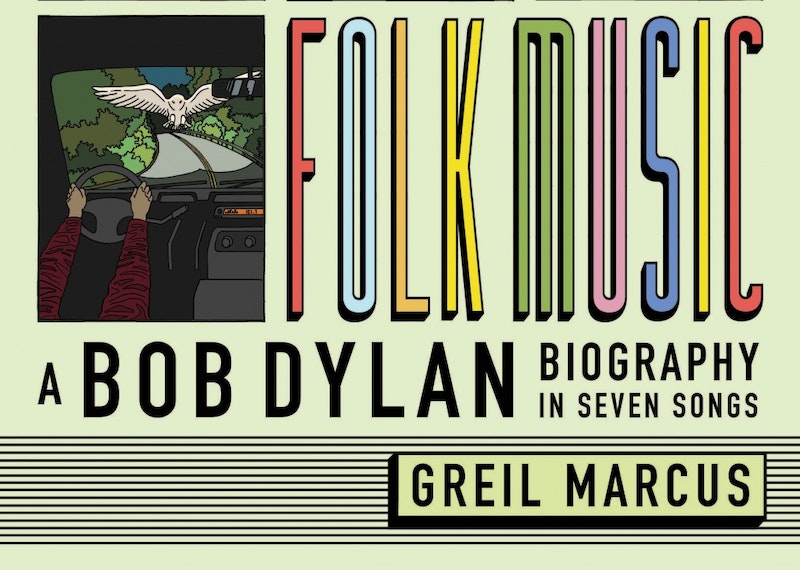 “I wish that for just one time you could stand inside my shoes/And just for that one moment, I could be you”—Bob Dylan, “Positively 4th Street.”

Greil Marcus waits until the closing chapter of Folk Music: A Bob Dylan Biography in Seven Songs to drop the above lyric, one of hundreds that makes it into the book’s dense 239 pages, on the subject of an entirely different song, Dylan’s late-career opus “Murder Most Foul.” To Marcus, “Murder Most Foul” is really Dylan inhabiting John F. Kennedy in the seconds after he’s shot, a collision of past and future that breaks time completely, just long enough for Kennedy to call Wolfman Jack and request a few final songs. That’s the throughline of Folk Music: empathy as a way of understanding Dylan’s life and work. It’s also an honest attempt by Marcus to grant Dylan’s wish on “Positively 4th Street,” to stand inside his shoes by way of seven songs.

My prior familiarity with Marcus was mostly limited to the assigned reading in courses at my university’s honors college, including a course on American counterculture taught by a nice, well-meaning Boomer whose whole concept of counterculture, like many Boomers, calcified around the time she had children (punk, riot grrrl, and rap all got the short shrift). Marcus is an undeniable historian of music and culture (his essay on Twin Peaks, which traces the series back to Dante, Hawthorne, and film noir, left a distinct impression on me). He’s also a writer of prose, a critic, a biographer, and a fan. Where these different roles converge—their crossroads, as Marcus might coyly refer to it—is the real substance of his writing.

It’s not always great writing. What turned me off from Marcus as a college kid is still there—his tendency towards a very specific strain of grandiose prose that seeks to legitimize “low culture” to an imagined gallery of humorless academics, as if the only thing denying Leadbelly or Little Richard greatness is a lack of weepy, embarrassingly reverential essays devoted to them. At times, I get the feeling he’s reaching, trying to conjure some kind of significance out of thin air (“If there’s an original thought out there, I could use it right now,” Dylan once sang), as he does on the subject of 2006’s “Ain’t Talkin’”: “The whole is deliberate and slow, as if there couldn’t possibly be any other way to begin this song, whatever it is. It suggests a complete world, a world made of morals and emotion, the emotions that fester, then rise up, when morals are broken. As you sense the world the theme makes, you hear in the music that that world is also being judged, and that the judgment isn’t final. All of that is happening.”

If you say so, Greil. One of the biggest temptations as a critic is to let fandom take precedence. Greil Marcus the Dylan Fan sometimes gets in the way of Greil Marcus the Dylan Biographer—not just in the reverence for his subject, but in the abundance of minutiae harvested from over a century’s worth of traditional American music. At its worst, reading Marcus feels like hanging out with a music nerd friend who can’t stop himself—and I mean himself; I won’t even pretend that women do this—from dropping names, titles, and tidbits of information about those names and titles. He doesn’t offer any of this information as a way of bragging or showing off his superior knowledge (though he has read all of F. Scott Fitzgerald’s books). I get the sense that he genuinely can’t help himself, that he’s too excited not to unload every bit of trivia he’s got—or better yet, that what we’re reading is just the tip of the iceberg, that he’s somehow sparing us.

For example, in the penultimate chapter on Dylan’s 1993 performances of the traditional ballad “Jim Jones,” Marcus takes 35 pages just to get to the song in question, unpredictably bouncing from one topic to the next like a pinball: Mike Seeger, Lee Smith’s The Devil’s Dream, Ricky Nelson, Karen Dalton, Barbara Loden’s Wanda. It’s all sort of connected, but when he leaps from Wanda to the traditional ballad “Handsome Molly,” even the most patient reader will wonder when he’ll get to the point.

That patience has its rewards too. On “The Lonesome Death of Hattie Carroll,” Marcus makes an unlikely connection to Laurie Anderson’s “O Superman”—two songs rooted in high art (Brecht and Jules Massenet, respectively) that otherwise couldn’t be more different. Like much of his writing, the comparison requires some intuition and imagination on the reader’s part, a willingness to connect the dots: “The Lonesome Death of Hattie Carroll” comes from “a time when music and politics were locked together,” and “O Superman” is its reflection across the void, “a song from a time when that lock had long since been broken.” If “The Lonesome Death of Hattie Carroll” is the moment where music and politics become one living, breathing body, “O Superman” is a song whose only politics is disembodiment. The vocoder, the ironic lyrics, the pulse of Anderson’s ah ah ah ah all conspire to produce a sort of anti-matter—the protest song turned inside out.

Marcus never quite gets inside Dylan’s shoes, but he gets pretty close on the subject of “Desolation Row,” narrowing his analysis of the 11-minute epic down to just the first stanza, delving into the history of lynching postcards, particularly those that commemorated two specific lynchings in the early-20th century: the 1920 Duluth, Minnesota lynching of Elias Clayton, Elmer Jackson, and Isaac McGhie, three black circus workers accused of raping a white woman; and the 1933 San Jose, California lynching of Harold Thurmond and John Holmes, two drifters who confessed to kidnapping and killing the son of a local department store owner. He surmises that Dylan knew about the Duluth lynching, that these stories, maybe even mementos like postcards (the unfairness of this baseless insinuation doesn’t go unacknowledged), might’ve been passed down to him by his parents and grandparents, much the same way that stories of the San Jose lynching were passed down to Marcus by his elders. “Desolation Row” isn’t just a window into a shameful, all-but-forgotten chapter of US history, he argues. It’s the reflection of a more intimate shared history.

At its best, Marcus’ iris shot approach to the material—beginning with the scope of a single song and slowly expanding its circumference to reveal the entire universe around it, or vice versa—illustrates his subject’s almost nucleic presence in our culture. He’s also careful to emphasize that Dylan doesn’t exist in a vacuum, that his discography can only be truly understood in the grand tradition of American vernacular music. I don’t disagree, but I wonder to what degree this is also true of, say, Geto Boys’ murder ballads? The prison ballads of Ice T? The Appalachian folk of Joanna Newsom? Or even something as debased as Wolf Eyes, the clown princes of American noise—a gang of real American troubadours if ever I’ve seen one.

I love Bob Dylan; he might be my favorite artist ever. And this is a good book, despite whatever reservations I have. But it’s Marcus’ fourth book about Dylan, and I can’t help but feel, once again, like an eye-rolling undergrad. (“Professor Marcus knows his Dylan, but has he ever even been to a Wolf Eyes show?”) Like many his age, he laments the twilight of American vernacular music (“when these singers are gone,” he quotes from Little Sandy Review’s final issue near the end of the book, “they shall have taken a part of American with them, and their kind will never be seen on the face of earth again”), and Dylan is one of the last standing from that tradition. But hearing Dylan and others talk about the folk scene of the 1960s reminds me too well of the underground DIY scene that I spent my 20s engaged in—one that had its own tradition, its own songbook.

While I settle into middle age and, much like my old college professor, cease to keep up with counterculture, counterculture goes on without me. But I do occasionally jump back in the pit. Like last Halloween, when I brought the skeleton costume out of the closet and went to a cover band show at the Current Space. It was all old Baltimore heads on the bill, people who’ve played underground shows here for decades, with band names that gave minor clues to who they would cover (i.e., Free Money, a Patti Smith tribute). The experience called back to the days of Bob and Joan in a circle with the acoustic guitar, passing the hat around. People played for their friends from a collection of new pop standards, and their friends shouted back requests like Dylan to Wolfman. Any one of the masked attendees could be Dylan himself. You could feel his weathered croon in the air: play “Rock Lobster,” play “Because the Night,” play “Halloween” by the Misfits cause you know it feels right.

Squash Squash begins to play. It’s a familiar tune I can’t place exactly, but the crowd’s going apeshit. I can barely see the band, there are so many people. Then it hits me: the Smashing Pumpkins! I have no idea what the title is (“Cherub Rock”), I just know it as the first song on Siamese Dream. Like the old 45s Dylan used to play, it seared itself into my consciousness at an early age, and its brand is still there. This song is a part of me, and I can’t even name the title.

The un-costumed lead is doing a great Billy, not overdoing it or making it too nasally. They got a Spice Girl on sax and a dude dressed like Silent Bob playing D’arcy, but whoever’s on drums is the one who’s really killing it. I get close enough to see that it’s Jeremy Hyman, formerly of Ponytail, sporting white makeup and eyeliner, vest and puffy shirt, flowers in his hat—a dead ringer for a different Bob.

As I watch Rolling Thunder-era Dylan drum for Smashing Pumpkins, a sort of Midwest rock ouroboros, Marcus’ elegiac tone seems a tad melodramatic. The hat will be passed long after we die—the circle still unbroken, by and by, Lord, by and by.