He delivers on the new LP Gliss Riffer. 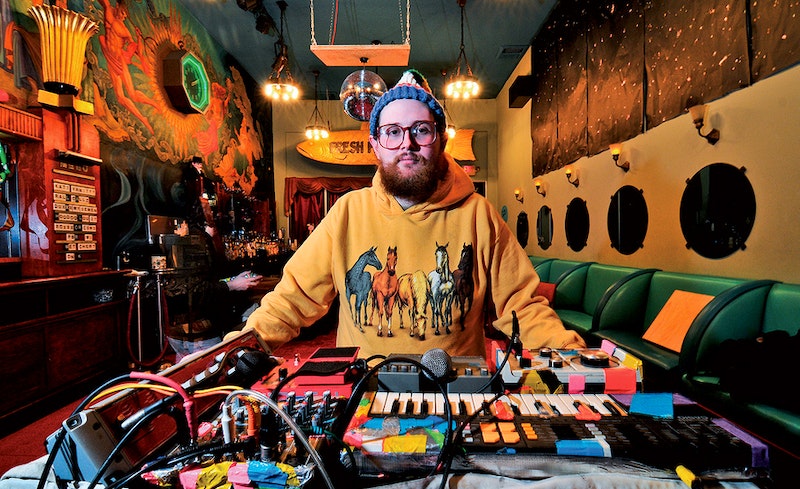 Dan Deacon rides lightning on Gliss Riffer, beginning to let loose and learning to relax after making sure he proved himself with Bromst and America, and that people would know him best through his performances and records instead of “Drinking Out of Cups.” Deacon has worked at a feverish pace his entire career, with apocalypse and death looming over his music and lyrics. He talks a lot about skin, hands, eyes, transformation, transcendence and reincarnation, like on opener “Feel the Lightning”: “And all of my arms are made of the sands/Of oceans of old that dried up and left.” Riddled with insecurity and panic in trying to make the best of the time he’s got and what time he’s wasted, the mission on Gliss Riffer is more a continuation from America than a throwback to Spiderman of the Rings. “Learning to Relax” does not mean Deacon will ever write a song like “Totally Boner Eat Shit” or “Pizza Horse” any time soon, and even “When I Was Done Dying,” with mouth ladders and incredible crabs has the same kind of chords and mood and emotional heft as something like “Snookered.” Deacon is only beginning to relax. Recording vocals in the Best Western is definitely cooler than having urban legends about you locked in a closet tripping on acid.

Gliss Riffer is the sound of something coming to a head. It’s equal parts lessons learned on Spiderman, Bromst, and America. You can hear the years of touring and extracurricular work with orchestras and ensembles, and quickly forget this isn’t the sound of the Ensemble playing in a room. It actually has a lot more sonic depth and space than the bulging and bright Bromst, and the message and mission is taking longer to figure out than America. Gliss Riffer is about the work process and the road to completion, about when something is ever finished or if it’s just about picking the right place to stop. He’s often described like a “euphoric day-glo orgasm” or “kindergarten sugar rave” or x band on y drugs, despite singing about corporate genocide more than Garfield and preferring stressful situations to psychedelics. His song titles never get enough credit. “Learning to Relax” followed by “Take it to the Max” is hilarious, and so is “Steely Blues.” I remember until 2009 or 2010 it was really hard to find Dan Deacon on YouTube because of “Deacon Blues.” It’s these sorts of minor annoyances that compel Deacon to work so hard to be regarded as a serious composer, or at least capable beyond being a “mongoloid man child” as a foreign promo once described him on a double bill with Bradford Cox.

Gliss Riffer sounds worked over in a good way, nuanced and not overloaded. I like how it’s fussed with: individual lines and bars are treated their own way, like the siren-like double-tracking “How that ladder of mouths waved so soft in the night” during “When I Was Done Dying.” “Take it to the Max” belongs somewhere in Koyaanisqatsi, and “Steely Blues” has this great “wooh-wah” froggy synth thing that’s stereo panned towards the end. It’s that kind of record. No wonder writers for major publications are struggling for a narrative and outsourcing to their young ones. Also, seeing material from this era played live over two years was very confusing. Songs like “Gold Lord” and “2008” were dumped along with a bunch of others that I never caught the names of. A show at Baltimore’s Crown later that fall was good but it was so overwhelming and I remember none of the songs. I wish I’d recorded it to see how much survived.

Dan Deacon is also one of the funniest people I’ve ever encountered in my life, and he does all this mini-impressions and throwaway lines that just devastate me, and I was happy that a pinch of that is on the record, when “It’s so late/What are they talking about?” is sung in a disgruntled police chief sort of voice on “Mind on Fire,” and the rest of the vocals aren’t sort of hanging out in the background making the lyrics impossible to understand without the LP in front of you. Deacon is learning to relax, but there’s never any time to goof off, because with each album, everything could go away.