A record so soaring and ambitious it’ll make you cry. 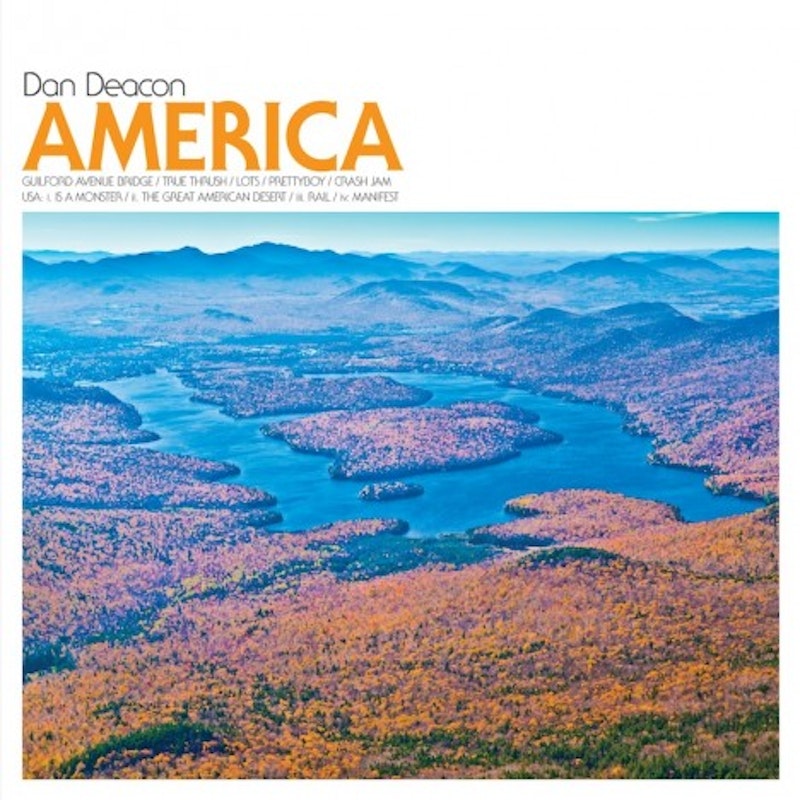 The world is a sick machine breeding a mass of shit. Dan Deacon knows this better than anyone, and it might be a little surprising to hear that his third proper LP, America, is a love letter and a monument to the things that make our country magnificent—its shifting landscapes, and not its people. Deacon’s personal story, publicly revealed only recently, is tragic and heartbreaking: he lost his mom to cancer at 17, and experienced the most indifferent and vile side of government-assisted medicine. In no uncertain terms, Deacon sees pharmaceutical conglomerates as merchants of death, profiting off the sick and prolonging and obscuring treatments to keep them sick. His theories are not crackpot; they are very real. The pharmaceutical-industrial complex is a behemoth with one function: to make money. It is not human, it does not feel, it is indifferent to trauma. Bureaucracy kills. It sucks the young blood. And we’re powerless against it.

The lucky ones don’t get exposed to this evil, and they can easily put their fingers in their ears and believe sincerely that the world is a beautiful place. I am haunted every day by the memory of 9/11, the smell of burning bodies, the endless walls of missing persons posters, thousands upon thousands of people weeping and screaming in the streets, hopeless folks jumping to their deaths out of desperation. I lived six blocks away from a war zone. Tanks were a regular sight. And there was the infinite fear of something worse to come. Eleven years later, things couldn’t have gone worse.

Dan Deacon used to welcome the apocalypse. He chanted with glee at warehouse parties and shows that the world would end this December, and all problems would be solved, because there would be no more problems. Nirvana. Oblivion. With age, experience, and the support of a community of friends, artists, and fans, he’s made a magnificently triumphant and ascendant album that grabs you by the throat and reminds you of the most beautiful things in the world, of our country’s scope, and of the things one man can do with his pain and his anger in the face of unstoppable wicked evil. His live shows, despite the gluts of shallow idiots on ecstasy and drunk fools, summon this utopian idea of community and togetherness in a time when emotional correspondence is anathema. The world is a sick machine, so we numb ourselves to it, to the mass shootings, to terrorist attacks in the Middle East, to the murderous regimes of Syria, Libya, Rwanda—we simply can’t handle the amount of evil that controls the planet. So we dance, we talk about who had sex with whom, and what everyone’s doing tonight.

The only imperative is to make our world a better place, however you can. Dan Deacon’s America is one of the most beautiful and inspiring records I’ve ever heard because it is the sound of good. It is the sound and the vision and the spirit of a man who’s experienced the indifference of government medicine, of soulless companies that want us sick, terrorists that want us dead, that want to drain our spirits in the name of religious nonsense or political babble. America, in all its awe-inspiring technical complexity, sonic richness, and driving, soaring ambition, is an antidote, small as it may be, against these evil forces that turn our planet. It makes me cry, it’s so beautiful, and triumphant. If this won’t shut up the mouth breathers still quoting “Drinking Out of Cups,” maybe nothing will. Maybe it doesn’t matter.

Because enough people will understand and appreciate that Dan Deacon has made one of the most important albums of our time, a piece of music that rejects the hideous hipster notion of “Whatever man, just be chill, everyone’s got their own thing and let’s just be cool about it and don’t harsh on what anyone’s doing. Party on.” Dan Deacon isn’t interested in partying anymore; he wants transcendence: spiritual ascension past the caked muck and mucosal grime of our rotting, decaying cities, absurdly short-sighted elected officials, and the religious insanity that destroyed my home. America deserves every accolade you can give it, and in my heart I know that this will be an era-defining piece of music, the beginning of when popular artists and musicians started giving a shit. America is a triumph of the will, of the human spirit, and a monumental display of ambition that makes me want to create something as powerful and aggressively emotional. I hope you’ll feel the same way.