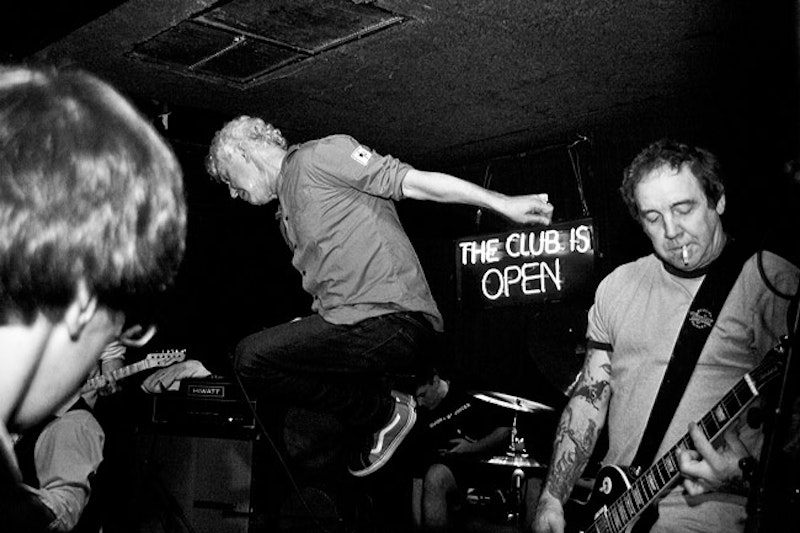 Coming into contact with “Whimbrel” is like wandering slowly into a mammoth, lightless beehive: a variegated swell of undulating, foreboding buzz, hovering stubbornly in place. Almost hovering, anyway, since it’s not like there’s an active effort to disguise the thoughtful chord shifts that begin to circumnavigate the burnt soul of this piece after a respectful interval. Over the course of nine quick minutes, the menace gives way to a sort of consistent double-helix’d stasis that’s almost bathic; the bees aren’t in attack mode anymore, they’re docile, nuzzling you through your Dolce & Gabbana beekeeper’s zoot.

In a general sense, this drone is heavily reminiscent of curbs and park benches Mountains and Zomes were onan-grinding to sphincter-numbing effect last year—though Tag Cloud is operating in a grimmer frame of mind—and there’s no way Chris Videll doesn’t deserve his own Thrill Jockey contract. Everybody has one. Even I’ve got one, snitches. (Kidding.)

“Cold Blood” is not, by any stretch of the imagination, a happy song. We find a triumvirate of un-identical rappers spitting agitated, ratchet-circle double-time over Ryan Hemsworth’s dour production, which suggests the seconds just prior to passing out on a drizzly city street at thee a.m. because somebody clobbered you in the back of the head with a tire-iron en route to ganking your chain. A great deal of effort is expended—seriously, the listener can almost feel three sets of throat muscles clenching and unclenching—to put across a critical degree of distress and unease with a fatal lack of finesse. “Cold Blood” is exhausting work for everybody involved.

There is almost nothing exceptional about “Cold Blood,” beyond a disdainful chorus: “He say he rap, but the nigga don’t really spit it/He say he strapped, but he ain’t doing shit with it.” An initial impulse might be to side with the speaker against the unspecified target, or targets, whose tendency to pull punches is being called into question. The secondary impulse might be to wonder if the speaker doth protest too much. I’ve found myself mulling a third impulse, where the chorus becomes a mirror that’s either uncomfortable or intriguing to contemplate, depending on one’s state of mind. Thought turns into a remix version of The Interrogative Mood: am I truly owning the roles life has assigned to me? Did I give my all at work? Is this column the best column I am capable of writing in the here and now, with all of my stars out? Could I be more invested in every moment I spent with my family? Am I meeting or exceeding the expectations that I’ve set for myself? Have even set any expectations, or am I just sort of drifting aimlessly along with no destination in mind? Why am I allowing months and years and decades to pass as dreams molder and gather dust? What is trying to me? Am I trying? Who, finally, am I?

The answers can be more frightening than the questions that elicit them.

Guided By Voices, “God Loves Us”

One of hip-hop’s most abused and unsubstantiated exclamations, “This is the realest shit I ever wrote” is traditionally used as a megaphone device to italicize and CAPS-LOCK a generalist sentiment that would sound banal regardless of its source. The phrase is an outgrowth of the early 2000s tendency to append variations on “realness”—“I’m real,” “you’re not real,” “none of this is real,” et al.—to one’s persona to amplify personal authenticity. What I’m getting at, in an admittedly labored way, is that “God Loves Us” is very literally the realest shit Robert Pollard has ever written and will likely ever write. There’s an e-coli slimed riff that hits like a stroke. There’s a no-nonsense declaration of faith so assured that there’s no room for agnostic static—“We are living proof/That God loves us/We are, we are, we are, we are”—that’s stinging in its brevity. And then that’s it: there’s nothing else, the band’s in and out in less than 90 seconds.