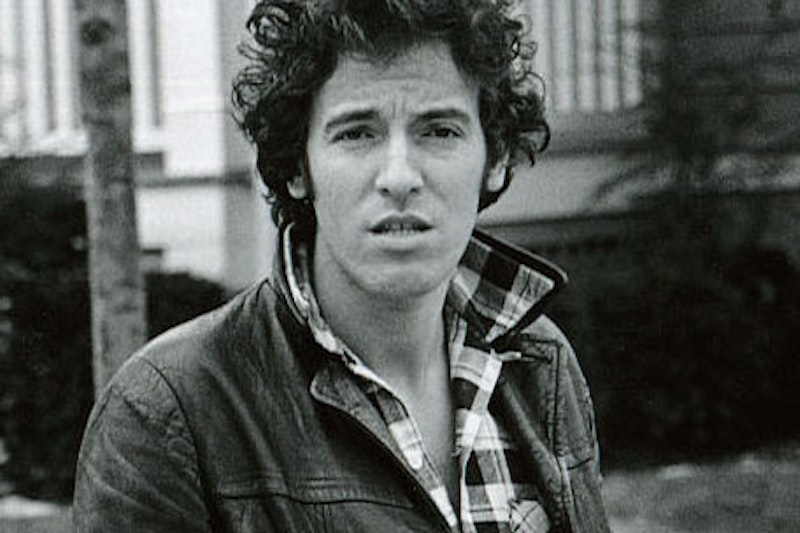 When I was in my late 20s I imagined a depressed, slack Bruce Springsteen. A becalmed Springsteen. Morose and heavy, looking off into the distance and rattling from mansion to mansion, throwing himself on one piece of furniture or another upon arrival.

In backwoods Maine he found himself at a recently acquired and not much seen mansion. He was alone: no staff, no house sitter. He walked into his half-dark mansion as the light faded and birds sang outside. He found the stairs, climbed them.

He pushed open the door to one room, then another, and then he found a guest room, and that's where he stayed. Shoes on, he threw himself along the narrow bed and looked at the graying, darkening skylight in the room's slanted ceiling.

I imagined Springsteen trapped by a crisis of self-respect and will. This was 1989 and the big carnival of mid-80s grand winners had hit the next phase of their careers, descent: Sylvester Stallone, Michael Jackson, Prince, Steven Spielberg (yes, he recovered later, but at this point he was making Hook) and Bruce Springsteen. Throw in Paul Hogan, who looked like he was joining the big time in 1986, only to have his career step off the cliff.

I followed that sort of thing then—celebrity life choices, how they engineered all that wonderfulness—and read about it on the subway going to and from work. I combined this with my thoughts on post-1960s American life and the personality as show, and other things. But mainly I liked looking at success, and the mid-80s had been a breakthrough period for success in the terms that I understood it—for example, platinum records and box office grosses. But now we had the slump.

The career drops I read about gave me a bad feeling. It was looking to be another hot summer like the one before, meaning a bad summer. The air in Queens would fold me in again and make me crawl with worms of sweat until it felt like letting go—my poetic description of living through the 1988 heat wave. It had really been a dismal period. For weeks in the middle of the summer I lay on my futon and felt the fan's air rushing over my heel and ankle, and in the dark a hip-hop station played the kind of jazz that's just a piano tinkling and electric guitars murmuring at each other. The DJ came on now and then to say it was a good time to stay indoors and keep out of trouble. It was so hot that people figured a riot might start just because.

That's the summer I expected in June 1989. I'll add that I was 30 pounds overweight and hated my job, and this was the case during the terrible 1988 summer and early summer 1989, and would be the case for many years.

So I thought about a morose Bruce Springsteen who flung himself on his guest bed in a house he didn't know, a man dropped in the cool woods of Maine, waiting for night, and I imagined the convulsion he had when the dark came. Without knowing it, all through the period of listless casting about, of witnessing his own career decay, he had been building to this point. Now his soul heaved. It turned upside down. It had him under its weight, it penetrated him. Elvis Presley had a twin brother lost at birth; my Springsteen believed he must have a lost brother too, a dark to his bright: “Adam Raised a Cane.” The lost twin's destiny had been closed off, but now Cain was back and he took Springsteen. It happened right there among the sheets, miles from another soul.

Such was Springsteen's vision. His night convulsion took the form of an imagined experience in which the parts of his psyche grappled. The next morning he woke with new ground rules for his soul. All this time, he'd only been half-living his life. Now he was off the sidelines. He was going to have the life he was meant for.

This was also the summer of the Tim Burton Batman and the Joker who starts as a nobody, gets mangled and transformed, and comes back as the dangerous man who tears everything down. Thinking about my transformed Springsteen, I dropped onto my futon with my 30 extra pounds and awaited another summer and the end of my 20s.