Preaching to the Club Choir

Cursive is a great group, but they’re stuck in a small world. 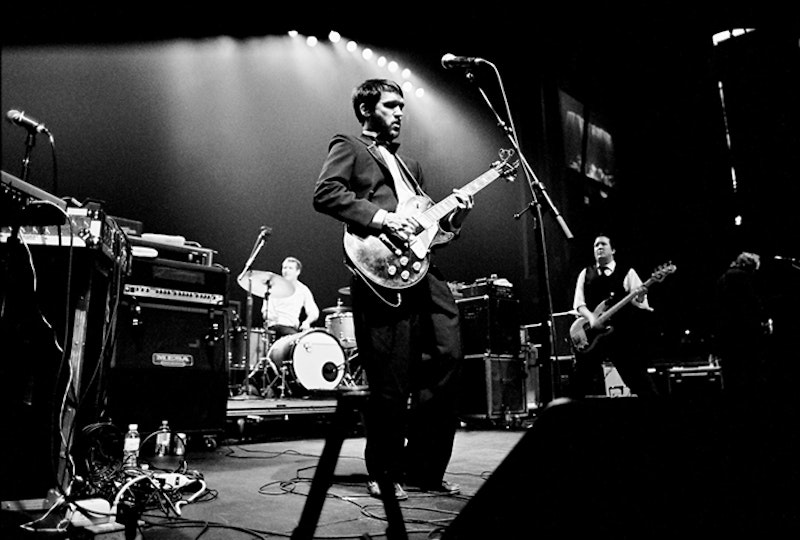 As I wrote earlier this week about the fall of MTV and the splintering of scenes and music cultures, in these niche-friendly days, the most bands can hope for is preaching to their own choir. Indie rock breeds indie rock, trendy rock breeds trendier rock, two hip-hop albums a year bring together fans and self-conscious white critics, and the summer festivals are still headlined by dinosaurs like Paul McCartney, the Red Hot Chili Peppers, Robert Plant, and Tom Petty because few contemporary artists can tout such a wide demographic of fans, even though they could if they had the means. To me, no group exemplifies this idea better than Cursive. Their opus, 2003's The Ugly Organ, is a brilliant rock record with a conceptual/narrative bent that actually works and invigorates the songs for once. It's an extraordinarily accessible sound, melancholy and melodic, but they've never quite been able to extend their reach past their emo roots, stuck on Omaha's Saddle Creek records until the end of time.

The Ugly Organ is a record I discovered at 12 or 13, got really into for a year, and revisit frequently now. Nothing else in their catalogue really does it for me, although Domestica and Happy Hollow are quite good. I'm convinced if there were still a big rock monoculture or primary outlet for this kind of stuff, songs like "The Recluse," "Art is Hard," and "Some Red Handed Sleight of Hand" would've been massive hits. As a fan, it's all you can hope for; not just because you wish the artist well, because it simply means more material for you to devour and enjoy: TRL interviews, music videos, larger and longer concerts, B-sides, promotional materials, in depth discussion about the music. And for a supposedly whiny "emo" band, you find nothing of the sort on The Ugly Organ. It's easy to see where Cursive might've fit in amongst lesser clowns like Simple Plan, Good Charlotte, and Yellowcard.

I saw Cursive play in 2007 on a wildly mixed bill: Mastodon headlining, with folk punkers Against Me!, and These Arms are Snakes. It's not hard to imagine these four groups sandwiched together in some sort of artificial scene like grunge or millennial Lower East Side post punk. Yeah, it's true, none of those bands were friends anyway, but even a false sense of camaraderie and unity feels good to be a part of and experience. As it was, the show was great, every band annihilated the audience and it was probably one of the best rock shows I've ever seen. But they were all merely great acts on their own, with separate niches, separate fans, their own worlds where they play master and commander. It sounds great, because of course the monoculture had serious downsides, like overexposure, dilution, shallowness. But when your only option as a rock band is to play to your own fans, you'll be in clubs the rest of your life, pushing a bigger and bigger rock up a hill with each record as even the rockist critics begin to regard you as old hat repeating the same tricks. Is the answer wild reinvention? Either way, it's hard to appeal to a lot of people and maintain a shred of dignity—you might end up doing jingles for Car Biz.