“I remember we used to haunt the alleys of Dundalk and we were just holy terror and it’d be so bad." 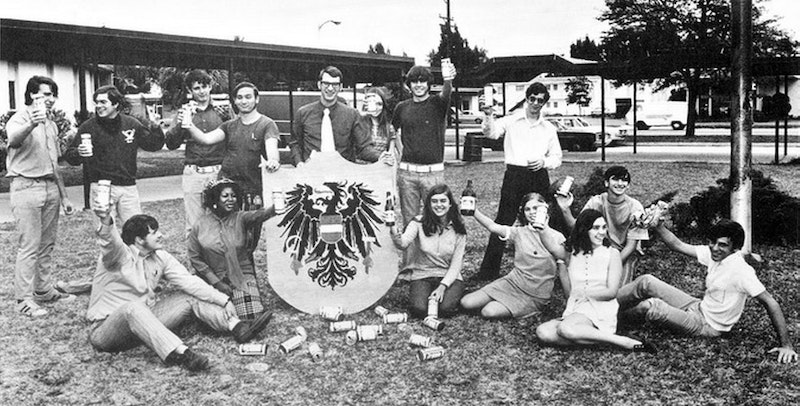 Rosedale, Maryland was home to Frank Zak, one of the region’s most innovative musicians. In 1960, soon after acquiring his first drum kit at nine, Zak began jamming with local garage bands. Some of his early combos included The Astro-Lites, The Lexingtons, and many other forgotten groups. By 15 he’d gone from hammering out the rhythms for cover acts and open jams to working part-time as a professional drum instructor for the Gordon Miller music shop chain.

During the mid-20th century Bethlehem Steel was the economic fulcrum for eastern Baltimore. Encompassing the neighboring towns of Dundalk and Rosedale, the suburban sprawl that exploded came largely from the presence of laborers employed at the company’s massive Sparrow’s Point steel mills. Frank Zak’s father was part of this work force, as was Sid Kramer’s father Lester. Gossip around the plant told of an up-and-coming new band featuring Lester’s son. The teen rockers were grinding hard forging a new sound, but had yet to find a steady percussionist.

Once Frank caught wind of their need for a drummer, he secured an audition with the group. The chemistry was instant: Sid Kramer’s primal rhythm guitar and Frank Zak’s complex beats created such a dynamic mesh that any search for a bass player was put on hold as the five musicians considered moving on without one. At the same time, while continuing to absorb the Rolling Stones’ early-60s songbook, they finally came up with a group name. No one remembers exactly who suggested The Rising Sons, but Dave Collins recalled it being inspired by the fact that “the song ‘House Of The Rising Sun’ was a hit at the time. Probably a little bit of that, and that we were young and it had a real optimistic connotation to it.”

Soon enough, the hip r ‘n’ b fans found out about major label L.A. blues rockers The Rising Sons. The quintet then chose to follow the route of the Beatles, Byrds, Cyrkle, etc. by tweaking their name with an odd spelling, becoming The Rysing Suns.

Under the management of Lester Kramer, the combo made their debut at a 1965 C.Y.O. dance at St. Rita’s Church in Dundalk. From there, The Rysing Suns tore the roof off at community centers, high schools, teen clubs (The Zoo, The Hullabaloo, and The Bluesette), college frat parties, public pools, more C.Y.O. events, and Towson’s Colony Apartments (a complex that provided an alternative to dorm life for Towson State University students). Even though their treble-crunching mutation of Brit r ‘n’ b was taking the local teen scene by storm, the crew longed for some low-end thud. That sonic void was filled by another Dundalk High kid, a chaotic figure whose presence made Charlie Maroburly’s pudding fueled steak knife hijinks seem tame.

Sid Kramer: “It took him about 10 minutes to learn how to play bass.”

Timmy was a Rysing Sun for only two or three months before his mother decided that the band was a bad influence. She forbade him from playing with the group once she found out that the Suns’ favorite pastime outside of making music was making mischief. This included underage drinking, ripping off copies of the Yellow Pages from phone booths in Rising Sun, MD, and playing practical jokes on each other. Collins once met up with Boyle and Kramer at a Dundalk street fair after he’d gotten drunk. Eventually the crew wandered into an alley where Collins blacked out and woke up the next morning only to find that Sid had tied him to a telephone pole. Of all the antics that defined the band’s teen outcast rep, nothing was more brash and insane than their nightly binges of vandalism.

Sid Kramer: “We used to call it reaping. You know how kids do on Halloween? They go out and throw trash cans and this kind of stuff.”

Dave Collins: “We did that about every night.”

Sid: “Timmy, he was the main reaper. I mean, he was destruction. We (usually) didn’t destroy anything. We’d just create a lot of havoc. Except for this one night…”

Dave: “It wasn’t even our typical reaping territory. It was down by Rosedale.”

Sid: “We were drinking peach brandy. It was Friday night and we weren’t playing. Frank knew this guy down the road who could get us booze. We were about 15 and Timmy decided he wanted to reap, and he got these bricks and totally destroyed this woman’s birdbath. I mean totally destroyed it. We were drunk. We were seen by somebody in the neighborhood and then we got busted and Timmy’s mother said that we were a bad influence, but he was the bad influence.”

Dave: “I remember we used to haunt the alleys of Dundalk and we were just holy terror and it’d be so bad. The police would be at the end of the alley and we’re like bobbing and weaving and all this stuff and just scared we were gonna get caught, and we had to beg Timmy, “Stop, man, stop!” And he’d say, ‘Okay.’ But all of a sudden you’d hear a brick goin’ through a window. Off we go again. He was the man. He was a maniac. Great guy though.”