His period of married-with-children bliss was very brief. 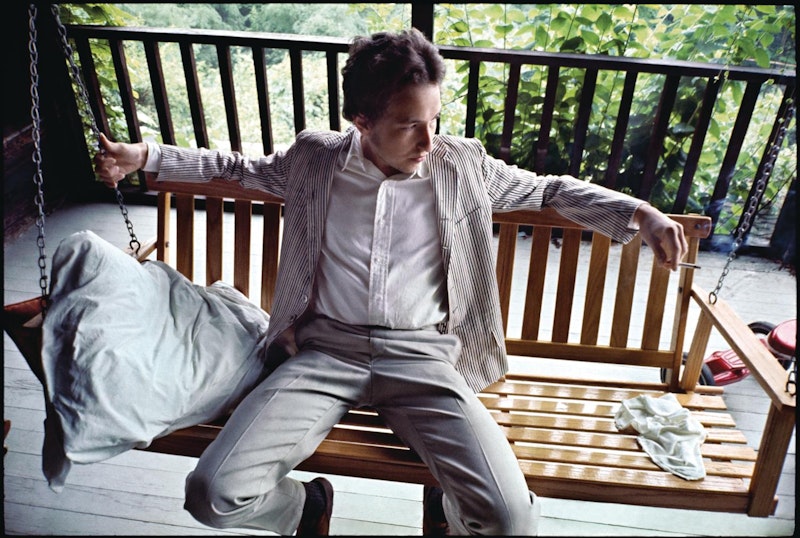 A curious article from The American Conservative about Bob Dylan was posted on Twitter last weekend—that it was first published in 2014 isn’t especially relevant, given the topic—claiming that once Dylan retreated to Woodstock after his manic, and shortened, 1966 tour with the Hawks, his equivocal “conservatism” surfaced.

I think the author, pop music writer/biographer Robert Dean Lurie might’ve heeded a lyric from Dylan’s Blonde on Blonde composition, “Absolutely Sweet Marie,” which reads, “Sometimes it gets so hard, you see.” While Lurie says it’s “wishful thinking” that Dylan went full-out right-wing in 1967, he does write: “We are on firmer ground in saying that Dylan, after leading the revolution for a time, recused himself from the movement and became something of a traditionalist—albeit an idiosyncratic one.”

What revolution? Cultural and political upheaval, certainly, but any hopes of a full-blown “revolution” were illusory; otherwise Nixon wouldn’t have won the presidency in 1968 and ‘72. And, as is well-known, Dylan never considered himself the “leader” of the “the movement,” and to the consternation of his initial coterie of Pete Seeger/Joan Baez/Phil Ochs devotees, he ditched that mistaken appellation with the song “My Back Pages” in 1964.

I appreciate Lurie’s enthusiasm for his thesis, but it’s just wrong. Even worse, he quotes an historian, John Willson, from the conservative Hillsdale College, who says Dylan had “all the political savvy of Barbie.” That’s like saying Mick Jagger or Paul McCartney have the economic acumen of a priest or one of the homeless souls that seek shelter in his parish. Dylan, after all, spent hours at the New York Public Library in 1961, upon his arrival in New York, laboriously reading the microfiche of contemporaneous newspaper accounts of the Civil War.

Lurie, as a musician and critic, should’ve realized there’s no percentage in trying to nail Dylan down to one ideology or another. He quotes from Dylan’s book Chronicles, Volume One to confirm his views, but just one of many certainties in Dylan’s long, weird and brilliant career, is that nothing the man says to the press, or writes himself, can be taken at face value. Chronicles was a terrific book (and it’s a shame that the once-promised Volumes Two and Three are unlikely to appear), full of hilarious stories and keen insights, but you had to read it with skepticism.

Lurie pays special attention to the “poignant” “Forever Young,” from Planet Waves, a gooey song I never need to hear again. It was indicative, Lurie writes, of Dylan’s satisfied and traditional domesticity—never mind that he’d moved back to NYC by that time (as well as building a house in Malibu)—and spoke to the celebrity’s dedication to his wife and kids, forsaking any controversial songs. Lurie leaves out that in 1971, Dylan wrote the “protest” song “George Jackson,” about a Black Panther who was murdered. “I woke up this morning/There were tears in my bed/They killed a man I really loved/Shot him through the head.” I remember liking the song a lot (especially the acoustic version), but was wary of critics writing, yet again, that “Dylan was back.” Dylan didn’t know George Jackson; it was a typically cynical maneuver to confuse his audience, and the media, while he was allegedly on hiatus.

While admitting, “Ultimately Bob Dylan was not able to sustain his domestic idyll,” Lurie still points to the embarrassing song (from Desire) “Sara,” about his estranged wife Sara Lownds, saying it was a “casting of marriage as a heroic endeavor.” So heroic that in the couple’s divorce settlement of 1977, it was revealed that Dylan was not only a philanderer but also physically abused the woman he married in 1965. After the divorce, which was adjudicated in California, where the couple had a domed mansion in Malibu, Dylan embarked on what was dubbed “The Alimony Tour.” Dylan shelled out an enormous sum—$36 million, one of the highest in such litigation at the time. She also collected half the royalties of the songs he wrote during their marriage, in exchange for a non-disclosure agreement.

Another mangling of the facts is Lurie’s take on Dylan’s productive output with The Band in 1967. He writes: “Dylan no longer sought to bottle the zeitgeist in his music; he simply aimed to write solid songs and bring in money for his family.” I don’t think Dylan ever attempted to “bottle the zeitgeist,” but his influence was enormous nonetheless. He recorded Blonde on Blonde in Nashville, unprecedented for a rock star, and established a new haven for other artists. When the powerful John Wesley Harding, a spare, mostly acoustic album, was released without fanfare on Dec. 27, 1967 (counter to the psychedelic music on the charts), it began a “back to the roots” trend, and, ultimately “country rock.”

Lurie also says the “Basement Tapes” songs were a mix of traditional folk songs, a lot of “gibberish” and “some brilliant” tunes, sung in a “relaxed, unforced manner” and that “none of the songs were ever meant for release.” That’s false: Dylan send out an acetate of 14 songs to favored artists like The Byrds, Manfred Mann, Baez and Peter, Paul & Mary—who could put the songs on the charts. And there’s nothing relaxed about his intense recordings of songs like “This Wheel’s On Fire,” “I Shall Be Released,” “Too Much of Nothing” and “Nothing Was Delivered.”

As demonstrated by Lurie’s conclusion, he’s reading what he wants into different periods of Dylan’s career. He writes: “As a husband, father, and songwriter myself, I want to believe—I need to believe—that such a life [domestic tranquility] is possible. And for a not-insubstantial period of time at the very height of his popularity, Bob Dylan demonstrated that it could be done.”

I wouldn’t call a period of around seven years—that’s generous—very substantial, given that Dylan’s now 77 and has led an eccentric, boozy, tumultuous life, but if it gives Lurie solace, I certainly have no quarrel.