Five Songs My Brother Sent Me

I’m out of the loop. I asked my brother to school me. This is how you support your siblings. 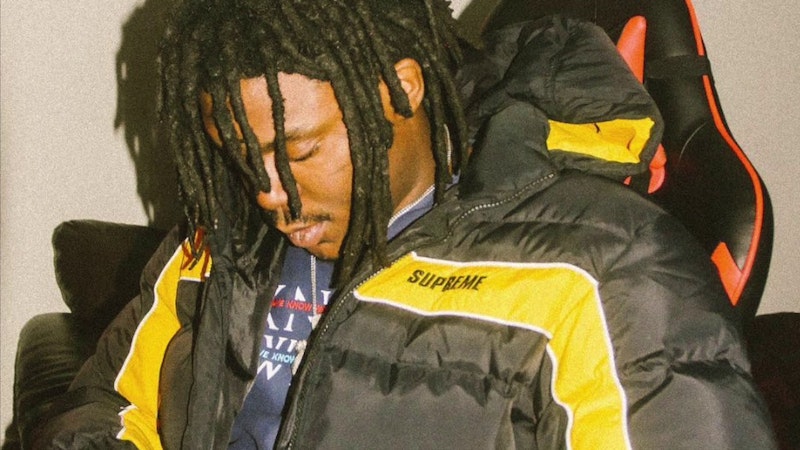 For the past several years, really most of this decade, I’ve felt woefully out of touch with new music and have struggled to find new artists and bands to become obsessed with and embrace as they break ground and clear a path for a potential way forward. I fell back on old favorites and old music, combing through the 20th century as the second decade of the 21st zipped by. My pick for artist of the decade is Liz Harris, aka Grouper. No one has put out more albums I love than her since 2011, when I feel like I lost the plot. But my brother Booker has kept his eyes peeled and his ears open while I’ve gone headfirst into my ditches digging for gold. I asked him to send me five new songs I should write about. I said he could add whatever he wanted as commentary or instruction, and I’ve included all of that in parentheses below. This is how you support your siblings.

Thunder, rain, and bell sound effects. Nice. Oh, fuck. The stock cinematic sound comes rushing in. I just stared at a wall for two minutes while the song played. This does nothing for me but make me mad and resent Explosions in the Sky and Friday Night Lights for inspiring possibly thousands of teenagers and twentysomethings to play EPIC! so they’ll get a sync in an anti-depressant ad. Another copy of a copy of a copy, musically anonymous and inoffensive enough for comfortable placement in any context. Shouldn’t a Russian rock band sound a little less jolly? Is epiphany-core state-mandated or something? Is there a dearth of music for shiny happy people over there? Send this band to Siberia so they’ll have something interesting to write about. Also, presumably their guitars will go out of tune, and then they’ll be forced to sound angry and sad.

“Peach Dream”—Lucki (“the grouper of rap”)

This is the best song Booker sent me. By “the grouper of rap,” he means the hook is a minor key Wurlitzer melody. It’s really good. It’s too short. This is the only song that made me want to listen to the rest of the record, or look up the lyrics. I’m a fan of Lucki and plan on attending his concerts. Perhaps I’ll buy some merch, like a CD or a sweatshirt. This is a good example of how much harder it is to write about music you like than to dissect or tear apart music you don’t like. What can I say? Every moving part in “Peach Dream” moves in congress, compounding the power of each in an impressive case of marrying form and function into something greater than the sum of its parts.

Booker sent me this song before. I don’t like it. You really have to earn a song title like “Marijuana.” Pop pot odes are well-documented throughout rock history, though they’ve usually been relatively coy about the subject (“Got to Get You Into My Life,” “Rainy Day Women #12 & #35,” “Going to California,” “Girl”). Even “Sweet Leaf,” “Joker,” and “With a Little Help from My Friends” are full of euphemisms. Then there’s the misinterpreted gibberish of “Louie, Louie” and “Pass the Dutchie.” Hip-hop artists have never had any hang-ups about masking the smell of marijuana—why are rock bands so precious about this still? If anyone from D.A.R.E. is reading, I recommend adopting Nirvana’s “Moist Vagina” as their theme song (if they can afford it). What better warning against pot as gateway drug than Kurt Cobain near the end of his life screaming “MARIJUAAAANAAAAAAAAAAAAA!!!” over and over? He was convinced marijuana led him to heroin once the former became boring, but what does Dilly Dally have to say about the good leaf? Well, they quote Cobain’s drawn-out wail of the word and turn into a seventh-generation Pixies rip-off brushed shiny and oh so bright. It’s too formal and square an ode, and once again, the bridge sounds “cinematic.” This makes me really mad. I wish he sent me more rap songs.

This one is good too. Sort of a Linkin Park + blink-182 vocal melody. Doesn’t really withstand multiple listens. Main synth melody is too off the shelf, the hook would’ve worked in a different key. This song should sound sadder, more depressed, scary. Again, the scales are comfortable for commercials. Whatever it is, the bridge is shit. The song is too content with itself and out of sync with the lyrics. It sounds phoned in, despite having a solid hook and a melody that would’ve worked much better in a minor key, with the rhythm less confident or predictable. Another case of elusiveness, or anonymity? The disparate elements on their own are compelling here, but they are out of step with each other, and none of it sticks. This is just too positive, and needlessly so. I don’t want to listen to this again.

We don’t need more bands that sound like happy Joy Division. Who started this? None of those post-punk or goth bands were this propulsive and indistinct vocally. None of them have anything to say. “Annie Blue” sounds cinematic in the worst way, as if it were readymade for a deodorant or Verizon ad. It’s not a bad riff but they blow it up too big at the end, and all the pop-up ads and interstitial bits of commercials will come rushing to the front of your mind. Like “Celebrate” and “Marijuana,” this isn’t musically anonymous as much as it is actively annoying, simply because its harmonic structure has been overrepresented in advertising and the white noise of life in the Western world. That they’re from Sweden, another country famous for brilliant misanthropes and black clouds, and still managed to produce something as unnervingly “inspired” and fake is really depressing. This is the Muzak of the 2010s.