A cheap and easy chorus. 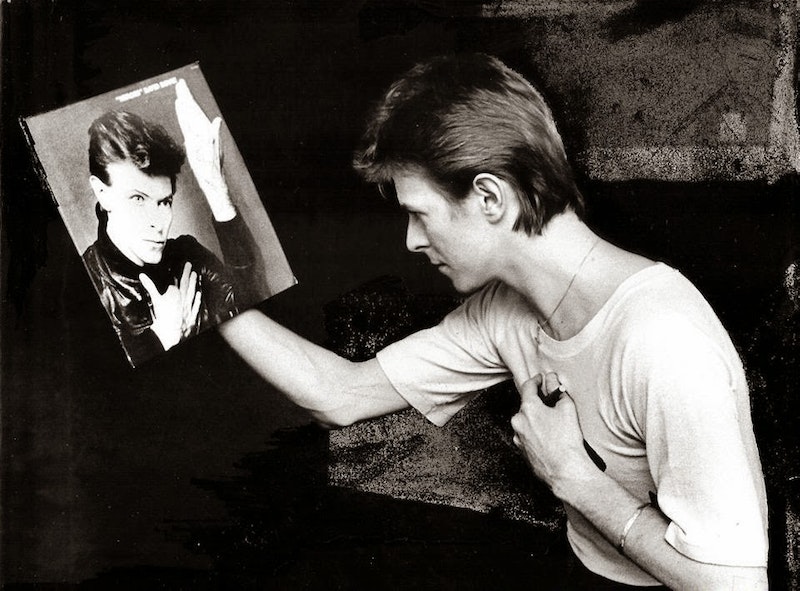 Why are there are so many choral arrangements of David Bowie’s “‘Heroes’”? Imagine a world without them. It’s easy if you try. In the wake of Bowie’s death, one of his most iconic songs has been transformed into pure schmaltz for cheap emotional appeal. In the trailer for Ang Lee’s Billy Lynn’s Long Halftime Walk and the fourth episode of Stranger Things, these cheesy choirs sing the lyrics so quietly that it takes a few bars to notice that you’re being had, and then you’re taken out of it and prevented from having any kind of authentic emotional experience. The cloying sentimentality of these opportunistic and lazy covers feels cheap for a few reasons: Bowie’s death is borrowed for its cultural significance and sadness, so the reference—whether it’s a climactic scene of kids discovering the body of their friend in a lake, or PTSD flashbacks of a soldier that’s returned home from Iraq—doesn’t earn its own pathos, and you’re distracted by the clashing of meta cultural clashing of Bowie’s death, the song’s gooey lyrics, and whatever dramatic or inspiring scene that’s happening on the screen.

The phenomenon of acoustic, choral, or otherwise stripped-down arrangements of pop songs predates this “‘Heroes’” bit by 15 years at least: Gary Jules’ cover of “Mad World” by Tears for Fears gave the song new life when it was used at the end of Donnie Darko in 2001. To be fair, this was one of the few examples that benefitted from a moodier arrangement. The 1983 version is heavily produced and very dated new wave, a very busy and fast performance of a song whose lyrics benefitted from a real black hoodie candlelight take, something that could be used in a montage of people looking wistfully out of windows. There isn’t enough space in the Tears for Fears original. This is not the case for “‘Heroes’”, a perfect recording in every regard: instrumentally propulsive and uplifting, with a shooting star guitar part by Robert Fripp and one of Bowie’s most soaring and searing vocal takes. When it was used at the end of 2012’s The Perks of Being a Wallflower, it made me weepy both times I saw it, these wide-eyed sad kids driving into the city to that massive and essential bass line.

Because if you’re going to alter the arrangement of a famous song and remove all of its identifiable instrumental elements, you’re left with the lyrics, and “‘Heroes’” just isn’t inspiring on its own: you need the bass hook, the spectral guitars, and the determined march mirroring Bowie’s impassioned performance. It’s the sound of his voice and the bed track that makes “‘Heroes’” so inspiring, not the lyrics. As with most of his songs, there are good lines here and there, but they don’t work well as a piece, especially when laid bare on the page. The lyrics work nicely as a patina on top of the whole arrangement, but they can’t really stand on their own. These sorts of minor-key, stripped down covers are especially common with big hip-hop songs, like “Hey Ya!” or “Gangsta’s Paradise.” These range from annoying to racist, their existence implying that the originals are silly or slight or lacking in emotional weight or seriousness, and that maybe if a bearded white guy played some finger-picked guitar really slowly and crooned it, they’d be “real songs.” The media’s latest exercise in emotional laziness might not be as offensive as coffeehouse Outkast covers, but they render what they score dead and heavy.