Get turned on by Band of Horses and My Morning Jacket instead. 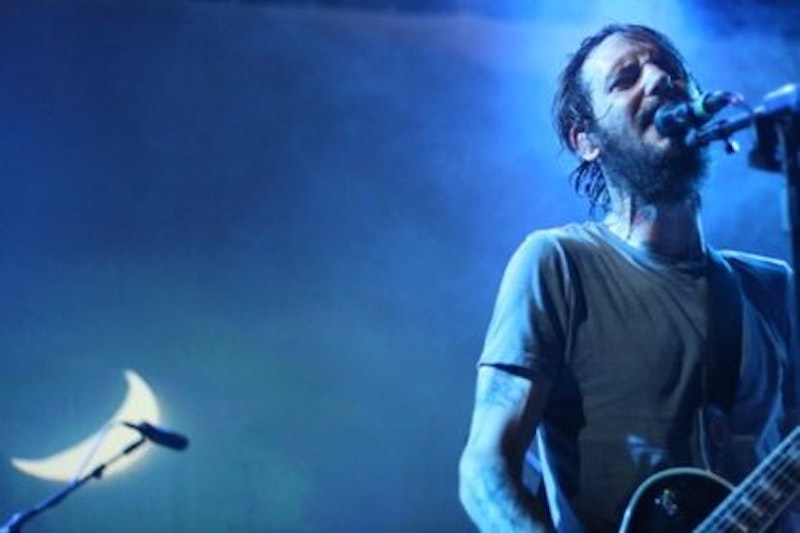 A whistling summer wind blew through Columbia, Maryland last Saturday night yesterday before the anticipated Band of Horses and My Morning Jacket performance at the Merriweather Post Pavilion. At a bar before the show, I asked a bunch of people buying overpriced beers which band they had come to see. It was 50-50.

Outside the venue, men stood on either side of the walkway yelling, “Any extra tickets?” or “Tickets at discount prices!” In a constant rap battle against each other’s aspirations. By the ticket dispensary, I killed time speaking to some attendees. They raved about the band Neutral Milk Hotel, rattling on about their life-changing, soul-connecting experience at the lead singer’s concert. As a NMH fan, I was intrigued by their entrancement with the group. When I asked them to label their musician’s sound in a definitive genre, there was a pause until “Ryan Gregregerson” determined that they can be described only as, “a trippy-ass folk-rock.” In reaction, I asked every person in the growing circle about Bob Dylan, in relation to Neutral Milk Hotel.

“Just less whiny than him,” a girl in rip-off 1950s sunglasses said. “Really the beginning of the evolution of songwriting,” proclaimed one stoner. “Iconic, he inspires these new artists to be half as good as him,” a girl told me. “I grew up on him, man. Amazing,” said a chick in a leopard-skin skirt.

Then I entered the cave that is the women’s bathroom. I chose to do my business in the dirtiest, darkest stall hidden behind a wall. I revitalized myself with the sketchiest substances I could scrounge around, and then interviewed the onslaught of estrogen. They told me their stories, told me to write about Portugal. The Man and Fleet Foxes because they “deserve to be famous.” I heard a lot about Bonnaroo, “a hot, sticky mess… great fucking time.”

I bummed a few ideas and cigarettes and moved to the Lawn, General Admission, evidently the only section that one can make it into with absolutely no ticket or documentation of anything. I started talking up 103.1 WRNR, the best local radio station around, and got in a bit of trouble with them for mentioning their name a few too many times. I will, however, mention WRNR once again. The station has successfully surged life into the music scene of Annapolis, Baltimore, DC, and Maryland’s Eastern Shore. Its impact has been massive, larger than they know; and they’re seducing a new generation of concert-goers down the path of music discovery. Some will now turn off The Bieber and get turned on by The Doors.

In the general admission area, a sufficiently higher number of people opted for the Morning Jackets rather than the Horses. I’m sure that there is some sort of methodical way to figure out why exactly the lawn-dwellers were tweaking around to see MMJ and no one else cared either way, but I have no clue.

I was sitting on a picnic table, listening to My Morning Jacket from a safe distance, nursing my last drink of the night.

I spoke to John McCrea of CAKE, who agreed to a brief interview. He explained: “Regarding technology at shows, I think often people pay good money to see concert performances, which are of course about being in the moment with people, and then they end up not being there in that moment much at all, but instead inside of small electronic devices. It becomes more about acquisition (like shopping) and less about creating a moment together.”

I do think that limiting the use of my phone at this show, replacing it with a pen and paper, aided my ability to absorb the feeling of a good musical performance, good drugs and good people. In closing, I asked McCrea what he thought of my gig as an online journalist, and wondered how much of his success could be accredited to social networking and electronics in general.

He didn’t respond to that, and I don’t think that he could. I looked over the heads of thousands of people watching the band (which many of them found online) and waving the luminescent screens of their phones in place of the outdated lighter. There’s a degree of hypocrisy in the Hipster Value of little-to-no phone use because it’s “mainstream.” How else are you going to tell your pot dealer how much you want? Or take a picture of the band that you’ve followed since your freshman year of high school?

Maybe “electronic devices” can be used for good and not cynical, soul-sucking evil. Anyway, Band of Horses, My Morning Jacket, WRNR, passionate people, a beautiful night… it was a lot of fun.