Contrary to rumors, The Smiths will never re-unite. 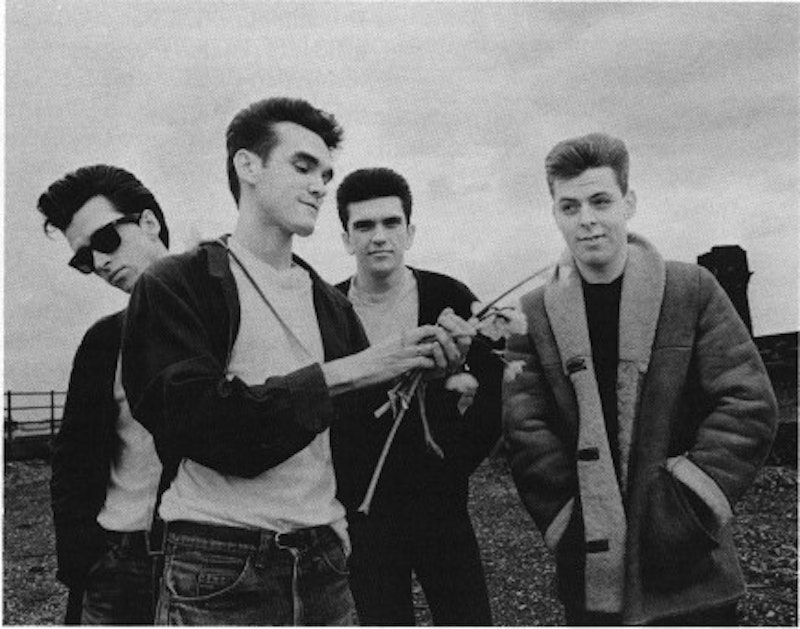 The Smiths will never get back together. We’ll all croak before we ever see the original four playing any of the music that made them famous and beloved in the first place. And I doubt Johnny Marr and Morrissey would get together even without Andy Rourke and Mike Joyce—there’s too much acrimony, bruised elephantine egos, and a startling indifference to the material that is indisputably everyone’s best work. This is, of course, nothing new. Contrary to popular belief, most great bands aren’t a group of mates that get along famously. It’s a paying job with fame and acclaim, yes, but if the music’s good enough and powerful, you’d be surprised by how many people are willing to put up with people they can’t stand just to make those classic records.

Morrissey would rather eat 50 prime ribs than get back on stage with Johnny Marr. To do so, at least in the mind of a self-absorbed pop star, would invalidate everything they’ve done in their solo career, every piece of activism, every side project they’ve taken on since leaving behind their most famous work. It’s a drag, but this is the game you play with the oversized personalities that are drawn to being in bands. And they don’t necessarily have to be pompous flits like Morrissey. Look at the Minnesota stoicism of Husker Du. Bob Mould isn’t ever going to play with Grant Hart or Greg Norton ever again because it would confirm what everybody already knows—he’s nowhere near as great on his own as he is in Husker Du, and his solo records are trash in comparison (sorry Bob, I like the new one, but it’s no Flip Your Wig). Grant Hart would probably trade a lung to do it, and Norton too if the paycheck was fat enough, but it just won’t happen. They can’t stand each other, and the glorious harmony in the tension of those personalities has long since evaporated.

Besides, even if Coachella went full vegetarian and somehow coaxed The Smiths into headlining, it would probably end up as a serious downer. None of those guys wants to play as The Smiths again. If they ever do, it’ll be for money, and waiting for a paycheck isn’t exactly conducive to transcendent musical experiences. Look no further than At the Drive-In, a reunion that I’d been eagerly anticipating for seven or eight years. When ATDI caved in and took the cash, they were open about it (especially Omar, who had trashed everyone but Cedric for years in the press, said he’d never do it for anything but money), and it was obvious in their listless and dreary performances. 2000 At the Drive-In is explosive, unpredictable. 2012 At the Drive-In is like watching bad karaoke.

The Smiths don’t need to be young to be amazing like ATDI. But they need to be into it. Examine this Madrid show from 1985. Johnny Marr, with his emerald and ocean blue guitar sounds, and Morrissey, chewing the scenery and alternating vocal phrasing, are doing their best to outshine each other and it’s sorcery. Imagine how depressing a Smiths reunion show or tour would be if everyone was as excited as Morrissey is here. But who knows—maybe promoters just haven’t named the right number yet.