Big Bono Is Watching You

U2’s Songs of Innocence materialized unbidden in the iTunes accounts of millions this week. 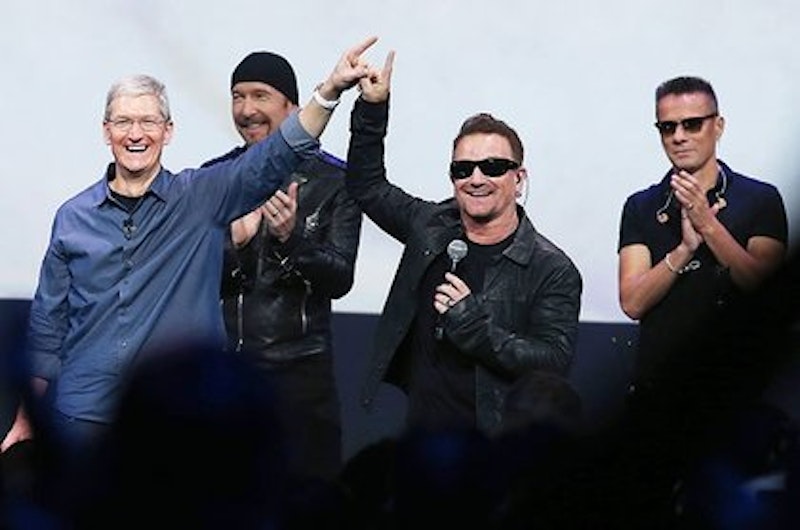 My earliest memory of U2 involved a therapy session, in my early teens, 10 or 11 stories up in a Baltimore City skyscraper, where my Boomer-aged therapist and I traded idle smack-talk about the band: how smug and arrogant the members seemed, how stupid Bono’s sunglasses were, the megalomania of it all. Over the years, as I made a concerted effort to avoid their music—no easy task—I took in occasional magazine features, finding Bono, the Edge, Adam Clayton and Larry Mullen successively less interesting. In 1999 or 2000 I shared a hotel room with the editor of the newspaper I worked with when we stayed in Ocean City for a journalism conference; he brought along a U2 best-of CD along, and I could barely fight back my laughter.

All of the above makes it clear why I’m the best possible choice to review Songs of Innocence after two listens less than 24 hours after Apple force-fed it to millions of iTunes customers as part of an elaborate iPhone 6 rollout that likely sent Billboard staff scrambling to the bar and inspired uneasy silence in the Knowles/Carter household. Since we’re living in a period where information travels slowly and sluggishly—why else would this article be so startling to you, the earnest, broad-shouldered U2 fan?—I’ve thoughtfully prepared a snap preview of a record that you already own, but didn’t even know you had (or even wanted) until now.

“The Miracle (Of Joey Ramone)”: “Miracle” sounds like Coldplay or the Killers trying and failing (or succeeding, depending on one’s point of view), in grand, wide-screen style, to write a fake U2 song that’s vaguely about the Ramones. They probably should have covered a Ramones song instead, maybe “Carbona Not Glue” or “S.L.U.G.”, but still held onto the title of “The Miracle (Of Joey Ramone),” which is itself about a billion times less fun a song name than “Bob Dylan’s 49th Beard.”

“Every Breaking Wave”: “Surfing is the best, man,” Bono gushed to Spin back in a 2002 interview. “Some of my best lyrics and solutions to pending international humanitarian crises arrive when I’m hanging 10 on a monster wave.” Given this, one might have anticipated that “Every Breaking Wave” to celebrate the thrills and highs of that age-old coastal ritual, but instead it’s about wiping out way off the shore on Maui after dawn and struggling, desperately, to not drown or lose track one’s ridiculous wrap-around sunglasses.

“California (There Is No End To Love)”: If nothing else, Innocence is poppy as fuck—like Bono and the boys stuck up a Brinks truck full of hooks en route to Danger Mouse’s citadel—even though Bono’s drivel undercuts the melodicism most of the time. “California” is especially sticky, and the shred-y guitars that crop up mid-way in are just gravy. I have no idea what this song is about, but it doesn’t even matter. Dumb title, though.

“Song For Someone”: I like to imagine Bono serenading Steve Jobs with “Song for Someone” during U2’s weekly visits to the Apple co-founder’s crypt, as The Edge gingerly feeds Jobs the bloody, uncooked livers of overseas Apple contractors harvested for food.

“Iris (Hold Me Close)”: The lyric “Hold me cllloooose, like I’m someone that you might know” operates on at least a few meta-textural levels, given that: Innocence is basically an Apple commercial sans visual; we’re all basically living the movie Her already; and software juggernauts, hackers, and friendly governments aren’t even pretending anymore that they’re aggregating data about you and everyone you know and using it to manipulate us. “I’ve got your light inside of me!” No, no, no! “We begin to forget the very reason we came.” That’s because we’ve all resigned ourselves to having our attention spans smashed to tiny shards. U2 helps the bitter pills go down easy here by vamping in 1987 drag.

“Raised By Wolves”: U2 get butch: hanging out in dark alleyways on the wrong side of the tracks, getting ink, scrunching their faces up. Gotta admit that when Bono sung about having his face in a pillow, I really hoped it had nothing to do with tattoo art—but no, these guys don’t have those kinds of guts. Better songs than this that are ostensibly about wolves: Duran Duran’s “Hungry Like the Wolf,” Radiohead’s “A Wolf At The Door,” and even Shakira’s shamelessly stupid “She Wolf.”

“Cedarwood Road,” “Sleep Like A Baby Tonight”: “Cedarwood” sounds like U2 trying and failing at writing something Radiohead would have left on the cutting room floor. Ditto for the vaguely Brian Eno-esque “Sleep,” only with painful gelding falsettos.

“This Is Where You Can Reach Me Now”: This song opens with a rather mesmerizing mélange of horns, pianos, and studio trickery that feels almost avant garde, which is awesome until Bono ruins everything by singing extravagantly-on-the-nose poetry like “complete surrender, the only weapon we know” and “we sell our souls away.” There is also gypsy whistling and a sweet, shuffling rhythm section groove that’s dank, mysterious, and enjoyable, when Bono isn’t lowering his sunglasses and wishing he’s Lou Reed.

“The Troubles” (Feat. Lykke Li): Whenever Quentin Tarantino gets around to shooting his exploitation flick about the IRA and Northern Ireland, he’s gotta shuffle a version of “The Troubles” into the soundtrack—sans Bono, who would probably demand to star in the thing. The song feels ancient, creaky, weary, sad, and Lykke Li’s presence manages to convey the mood perfectly without being cloying, sentimental, or showy, which—wait, you know what? Why can’t she just front U2 from now on, for real?