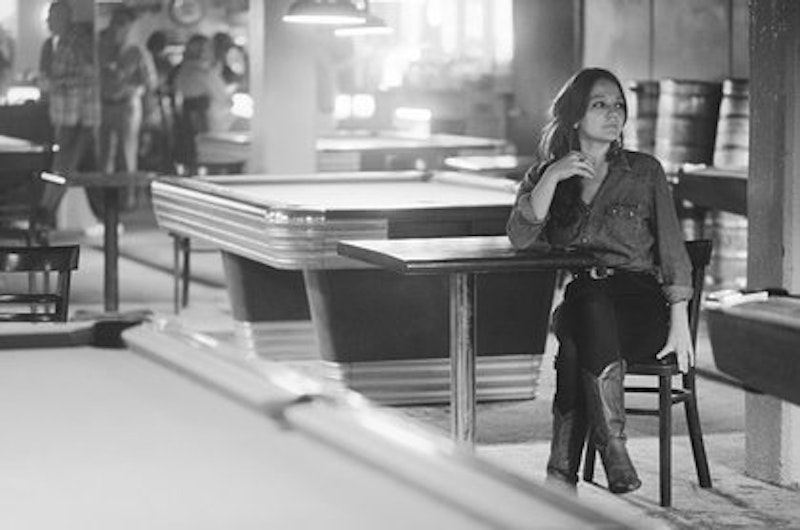 The country singer Kelsey Waldon comes from Kentucky, and she has some theories about why her state fosters so much musical talent. “Lots of hard times and lots of hard, early-on transitions,” she suggests, creates extra “determination and spirit.” All of it contributes to “that high, lonesome sound,” which Waldon likes to call “mountain soul.” Commitment also plays a role: Waldon can’t remember a time when she wasn’t making music. When she went to college, she majored in songwriting, taught by professional writers. This helped her learn “creative discipline.”

Her new release came together with the help a number of players, most of whom she’s known for a while. Waldon is full of kind words for her collaborators—she counts Brett Resnick (pedal steel), Mike Rinne (bass and co-producer), Josh Hunt (drums), and Christian Sedelmyer, who contributed fiddle to a track, among her “best friends.” She refers to Jeremy Fetzer, who also played guitar on the album, as “one of the best young guitar players in [Nashville].”

The resulting work, The Goldmine, is pervaded by a sense of being stuck. “Me And You Again” involves constant repetition of the phrase “now it’s me and you again,” like it’s an inescapable state of being. Small towns also pop up frequently in Waldon’s songs—they’re difficult to escape. “Ain’t got a job, ain’t got no money,” she sings. “This whole town just looks at me funny.” Sometimes perpetual motion becomes a trap as well, like in the song “Getting There,” where Waldon is “never arriving, always getting there.”

The Goldmine can push past blasé towards nihilism. On “Not My First Time,” Waldon sings over a slow, somber kick drum, “You know it’s not my first time/but it’s better than last time.” This could be a sign of progress, a small triumph. But she sings it mournfully; it sure doesn’t sound better. “Big Black Limousine,” which has the feel of Nebraska-era Springsteen, includes the line, “time and misery, they want the best of me.” “High In Heels” sports a firm beat and sparkling guitar leads, but extra speed and volume don’t offer solace: “waited on the job but it took too long/brother got in trouble now the money’s all gone.”

Few, if any, country albums released this year use as much pedal steel as The Goldmine, which has the instrument on nearly every song. “Most of [Waldon’s] favorite records have heavy pedal steel on them,” so this informed her approach. She’s also “attracted to the movement that the pedal steel provides, emotionally and dynamically.” It’s a tool with unique qualities—“you can get the pure tone out of it, there's nothing like it.”

Illustrating her feelings about coming up as a musician from Kentucky, the song “Best of Everything” preaches persistence in a tough world: “Sometimes you just gotta keep on going.” One of the ways to do that is by writing songs. Perhaps the most important thing Waldon learned from her time in the songwriting program was “new tricks to spark your inspiration.” “There’s inspiration and a song everywhere and every day,” says Waldon. “You just kind of have to look for it.”

Splice Today: Who played with you on this album? How did you guys meet?

Kelsey Waldon: On the album was Brett Resnick on pedal steel guitar, Jeremy Fetzer on electric guitar, Dan Parks on acoustic, Mike Rinne on bass, and Josh Hunt on drums. Skylar Wilson also played keys on a few tracks as well as Christian Sedelmyer on the fiddle for one. It was recorded and mixed by Anderson East out at his studio, Farmland, in Nashville. Mike Rinne produced the record with me, which is always a treat.

I've known a lot of these guys for a good while through the Nashville music scene, and have played with many of them for the past few years. Brett, Mike, Josh, and Christian in particular, are some of my best friends in the world and have been there with me since I moved to Nashville, musically and personally. Jeremy Fetzer is one of the best young guitar players in town, as well as Dan Parks. I think Brett is certainly one of the best young steel players (I'm biased). I've been fortunate to work with people who I not only respect musically but can also call my friends and family. The Nashville community is beautiful.

ST: The Goldmine may have more pedal steel guitar than any other country album I’ve heard this year—what attracts you to that sound?

KW: Most of my favorite records have heavy pedal steel on them, and it's a sound I've heard and been familiar with since I was very young. I am attracted to the movement that the pedal steel provides, emotionally and dynamically. When I cry, the steel cries with me. Besides that, it's an amazing instrument and if you can get the pure tone out of it, there's nothing like it. I missed what I was hearing on all my favorites records, too, so I guess I made something that I would listen to myself.

ST: I read that you majored in songwriting in college. What’s that like? Who teaches songwriting? How did the songwriting degree change your approach to writing songs?

KW: I did major in songwriting. We had a couple of different professors work in the songwriting program, and most of them were professional writers themselves and had a lot to offer. The thing that I took away most from it was the creative discipline as well as learning new tricks to spark your inspiration. A lot of people don't feel inspired all the time, and I feel that way a lot too. The truth is, there's inspiration and a song everywhere and everyday... you just kind of have to look for it.

ST: I know you’re into some classic country like Waylon Jennings and Loretta Lynn—do you listen to much new music?

KW: I am into both those artists, yes... especially as far as character, style, and perspective. I do listen to a lot of new music, of course. I like to remain relevant. Especially what's going on here in Nashville as far as roots music and Americana goes... I'm inspired all the time by my amazing friends.

ST: Kentucky country has always been strong, but it seems to be experiencing yet another renaissance. Why do you think the state produces so much country talent?

KW: I've heard it called the “Kentucky Sauce.” I know there're a lot of states producing great country talent, but I'm not sure. It's probably been pretty gritty at most times for a lot of us. I know personally for me, to be taken seriously, you feel like you kind of have to prove that you're more than just some hillbilly, in a sense. That's where the determination and spirit comes from, too. It's that high, lonesome sound... mountain soul, as I like to call it, as well. Patty Loveless and Keith Whitley had/have it. It's certainly a favorite of mine. The good stuff.

ST: Country is getting more attention these days in the mainstream than it ever has. Why do you think the genre is getting increased attention of late?

KW: I think people are proving that it's more than what you are hearing in mainstream... it's getting that authenticity and culture back, which is really what makes it special. Maybe it's timing, but people from all walks of life seem to respect it again. It just proves that if it's good, it's good, and anybody can respect actual talent. I love what's happening!

ST: If you could sing a duet with one singer out there right now, who would it be?

KW: I want to start a trio again like Emmylou, Dolly, and Linda did. Ladies, let's do it.

ST: If you could choose one singer to sing a song you’d written, who would it be?

KW: That's a tough one. Off the top of my head, George Strait.