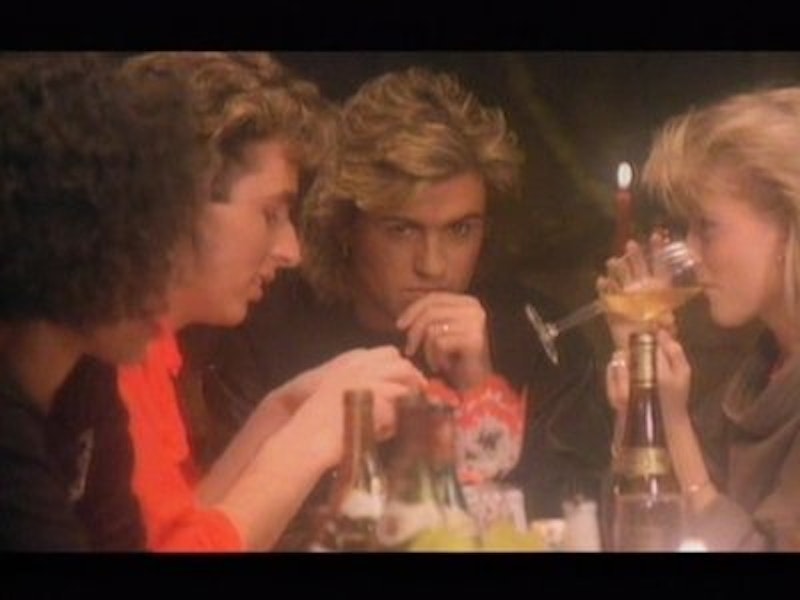 Directed by music video veteran Andy Morahan and set at a Sass-Fee, Switzerland ski resort, the clip for 1984 single “Last Christmas” is a universally adored period piece, treasured by fans worldwide. As the holiday season approaches, it seemed appropriate to take a fond, lingering look back at the making of Wham!’s most beloved, iconic video.

George Michael, Wham!: Everyone bunked in this horrid Victorian chateau, which in retrospect was probably haunted. If we’d shot the interiors there, the video would have had a very, very different feel.

Martin Kemp, actor: Not a single one of us knew how to ski, even a little bit, so there was this collective prayer the entire cast took up, that Andy wouldn’t need us to sashay down any slopes. And it worked, thank God.

Andrew Ridgeley, Wham!: I always related most to Jughead in those Archie comics, the ones where the gang went skiing at some bucolic lodge and Jughead would sit inside in a fake cast, drinking cocoa and attracting more girls than he could beat off with a stick. [Laughs] He had the right idea.

Andy Morahan, director: At that moment in time, a lot of artists and bands were projecting a wasted sordidness that I found distasteful. I told George that I envisioned a clean, dreamy aesthetic for “Last Christmas,” sanitized but not oppressively so. “Like a retouched holiday photo postcard?” George asked. Exactly, I said. This video should be damn near antiseptic, so crisp and clean that your mother would be willing to serve Eggs Benedict on it four times in a row without washing it.

Michael: All the holiday photo postcards I receive are curtly perused, then deposited into a large cardboard box, never to be read again.

Helen "Pepsi" DeMacque, actress: We basically took over that resort for an entire week.

Ridgeley: For whatever reason, the ski lift was left running, even though no one was using it, so you’d just hear that machinery grinding and humming, day and night. In the evenings I’d wander out onto the chateau balcony with a bottle of champagne and just watch the seats gliding in a circular cycle under clear, cloudless skies. One night George, who had taken to sipping from a monogrammed flask, joined me out there. We would up drunkenly harmonizing together, a version of John Lennon’s “Imagine.”

Kathy Hill, actress: Andrew and George instigated a lighthearted snowball battle that Pete shot some of, but which Andy deemed “too fucking cornball” to include in the video.

Peter Mackay, director of photography: The scene where George and Kathy are face-to-face next to the Christmas tree was shot an hour or two before the corpse was discovered.

Michael: The deceased was a Wham! fan who somehow discovered ahead of time that we would be shooting a “Last Christmas” video at this particular resort. Which, you know, I’ve always been suspicious about that, because Andy’s plans are typically top, top secret.

DeMacque: We knew he was a Wham! super fan because he was wearing a Make It Big t-shirt, like the album cover, and his mane had been liberally teased and fluffed.

Shirlie Holliman, actress: We kept telling Andy we should improvise a horror movie while we were there. The mood... the mood was dark.

Ridgeley: A bit of cabin fever set in.

Hill: My mother called me every day, and I would wrap the telephone cord around my arm and stare at all the snow and feel the landscape crawl towards me and at the end of the call have no idea what either of us had said. My arm was constantly red and sore, but since everyone was wearing long sleeves, it didn’t really matter.

Holliman: Kathy was definitely freaking out.

Kemp: I’d brought along a transistor radio that helped me fall asleep, but after the corpse turned up I started staying up late, in case there was a report of cannibalistic maniacs escaping a penitentiary anywhere near Sass-Fee. After a night or two I gave it up when I realized that I didn’t speak Swiss.

Morahan: Every gift box you see in the video contained gourmet guano.

Hill: Andy cut the take where George sneezed blood all over my blouse. George was very apologetic about the whole thing, but at the time I was like “I am never washing this blouse again,” and it wasn’t even my blouse, strictly speaking.

Ridgeley: Whenever my girlfriend and I have a disagreement, she whips out her Android and cues up the “Last Christmas” video.

Michael: The “Last Christmas” video was our “Thriller,” full stop.

Holliman: The crew took it upon themselves to teach Kathy how to ski. [Laughs] She was so innocent! “But I’ve never been on skis in my life!” “Kathy, dearest, you won’t even have to step outside the den.” By week’s end, she was a natural.