Aging Out of the Scene

It's hard to stay current when you're changing diapers. 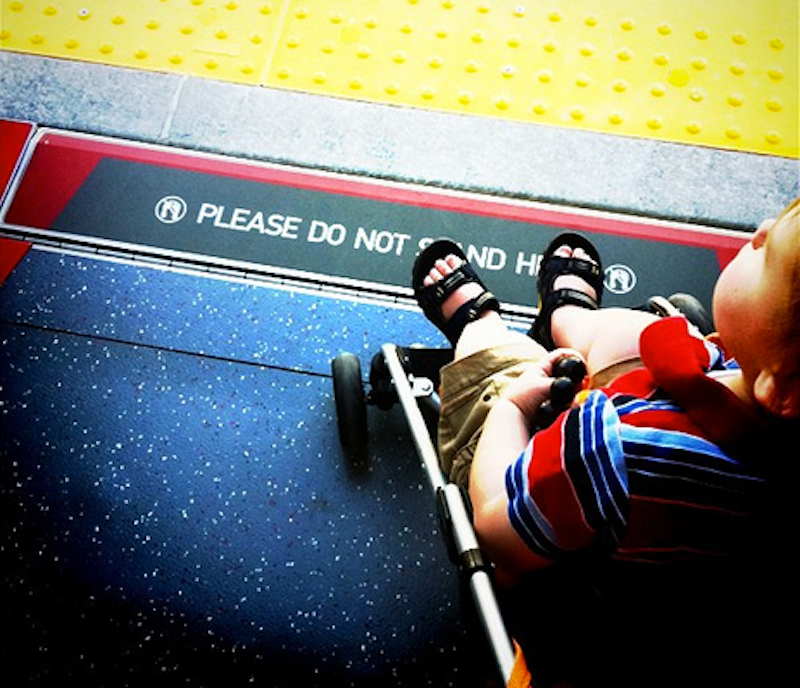 At 12, I’d sit on my bedroom floor every Sunday recording my favorite songs off Casey Kasem's Top 40 countdown. I’d play that tape all week on my boombox. Sulky and on vacation with my parents at 14, I stuck Guns ‘N Roses’ Use Your Illusion II in my yellow walkman and didn't take the earbuds out until the trip ended. When I was 16, my best friend and I spent most days driving around Brooklyn, U2, Jane’s Addiction, that one song by Alphaville, and The Cure playing out of the car window. When we had boys with us we’d shush them so we could sing along to our favorite parts. “Our” song was “Ever” by the Lemonheads and we’d sing it as loud as we could every time it was on.

I went to Woodstock ‘94 when I was 17, and slept in the rain for three days to get close enough to see Shannon Hoon in his girlfriend’s dress sing “No Rain.” I swayed with 350,000 people when Metallica brought the house down with “Nothing Else Matters” and yelled “God is dead, and no one cares,” along with NIN and the crowd. I moved to Scotland when I was 18, ostensibly to study abroad for a semester but ended up spending years there. Britpop was at its peak, every club night would end with the whole drunken place singing “Wonderwall.” I lived for Radiohead, Pulp, Manic Street Preachers and Stone Roses.

In my 20s, I finally embraced hip-hop, the background music of my Brooklyn childhood. It was rebellion that I never listened to rap before: it was too prevalent, I was too indie, but I fell for it hard when it finally took. I was listening to 50 Cent when that was a funny thing for a white girl to do. I played Biggie on repeat. At 31, at my wedding, I gave the DJ a pre-approved list of songs and when he dared play “(Everything I Do), I Do It For You” by Bryan Adams which was not, clearly, on the pre-approved list, I sent my new husband over to tell him to turn it off. Now.

I related to the Morrissey line “The most impassioned song to a lonely soul is so easily outgrown” but only as I judged older people and felt sorry for their music-less lives. At the top of the list of people I didn't want to be was someone who only listened to the music played on radio stations in their car. But as Beyoncé sang in that song they play on the radio, "cliche, cliche," I stopped listening to music almost immediately after my daughter was born five and a half years ago. You get a lot of information about what having children will be like but no one told me what a fraud I’d feel like. Someone gave me this baby to take home. Me! Isn’t that crazy?

I’d gotten one of those big strollers everyone has in NYC. I'm not apologizing for it, our streets are cracked and full of potholes and those things are necessary. I’d picked a special edition color, a dark denim. The first day she and I were alone, I bundled her into it, stuck in my earbuds as always and went outside. It's an odd feeling to push a stroller for the first time. I felt like a mailman. The dark denim color didn't help. I thought everyone was looking at me. I felt self-conscious about the earbuds. I was probably supposed to be listening to my baby's every coo. So I took the headphones out and never put them back in again.

I still played my iTunes library once in awhile on my laptop or when my husband and I would get a Zipcar we’d plug in our iPods. As our daughter grew, and we added a son and a car, a lot of music was simply cut because of questionable lyrics. It was the day that we turned off Kid Cudi’s “Pursuit of Happiness,” which has the line “People told me slow my roll, I’m screaming out fuck that, fuck that, fuck that” a little too often in the remix, that we realized just how much music was out for us. We’d be skipping songs so often on our iPods that eventually we stopped playing them altogether.

“I know when that hotline blings, that can only mean one thing…” I absent-mindedly sang the other night. “Someone spent a lot of time in the car today,” my husband said. He was right. That Drake song is on every eight minutes or so. I was officially that person, the one who only listened to music while I was driving and only listened to the radio because it was guaranteed not to have curse words. It happened, I was old.

So I didn’t take offense when Apple Music’s Jimmy Iovine said last week that women have a hard time discovering new music. Of course not all women: I know women my age still rocking in bands, and he did he specify that, but I’d bet age plays a significant role. Many women in their 30s and beyond have a very limited amount of new music consumption in their lives. If they have children, that consumption falls even lower (with exceptions made for the Adeles of the world). The only thing that Iovine got wrong is that men definitely have the same issue. Iovine has already apologized, and noted that the same difficulty does apply to men: “Our new ad focuses on women, which is why I answered the way I did, but of course the same applies equally for men. I could have chosen my words better, and I apologize.” He could’ve focused on age, not gender, and gotten it entirely right. Age robs us of the experience of new music. Save us, Jimmy.