An Archaeology of "Power": Kanye, Jay-Z, and Foucault

The official "Power" remix vs. the grandfather of post-structuralism. 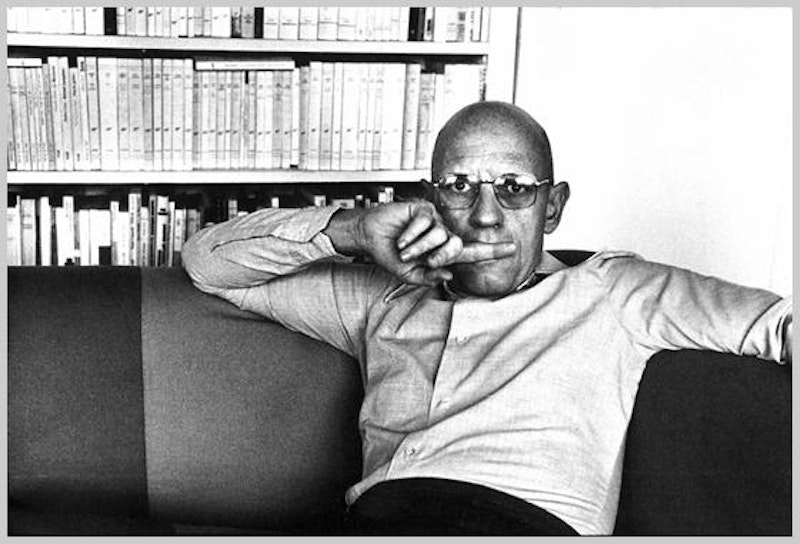 Jay-Z: (clearing throat) Life is a trip, so sometimes we gon’ stumble.

Michel Foucault: (shaking head) Power is not an institution, and not a structure; neither is it a certain strength we are endowed with. It is the name that one attributes to a complex strategic situation in a particular society.

West: I seen people abuse power, use power, misuse, and then lose power; I got the power, muf-cka, if you didn’t know.

West: I got the whole crowd goin’ crazy, homie; I should be rewarded.

Foucault: (assertively) Madness is the absolute break with the work of art; it forms the constitutive moment of abolition, which dissolves in time the truth of the work of art.

Jay-Z: We livin’ in that 31st century, futuristic fly shit…

Foucault: (tentatively) I think it is us who make the future…

Swizz Beats: (manic) Take that jacket off and go crazy on them niggas, man!

Foucault: (stretches, cracks knuckles) The law averts its face and returns to the shadows the instant one looks at it; when one tries to hear its words, what one catches is a song that is no more than the fatal promise of a future song. The Sirens are the elusive and forbidden form of the alluring voice. They are nothing but song. Only a silvery wake in the sea, the hollow of a wave, a cave in the rocks, the whiteness of the beach—what are they in their very being if not a pure appeal, if not the mirthful void of listening, if not attentiveness, if not an invitation to pause?

Jay-Z: (declarative) To be continued, we on that Norman Mailer shit!

West: My socket was out the plug—now it’s time to get the power back.

Jay-Z: Oh—I thought they silenced us.

Foucault: Silence itself—the things one declines to say, or is forbidden to name, the discretion that is required between speakers is…an element that functions alongside the things said.

West: (snickering) How “Ye doin’”? Who “Ye screwin’”? That’s for my dick to know, before you get to know ‘im. She ain’t give you ass? That pussy fictional.

Foucault: (empathetically) The most defenseless tenderness and the bloodiest of powers have a similar need of confession. Western man has become a confessing animal.

West: (ruefully) I gotta give her the eviction note.

Foucault: (appraisingly, smiling) The soul is the prisoner of the body.