“This Clear Hearing Is Not So Easy To Attain”

Twig Harper on Clairaudience Fellowship, his collaboration with Daniel Higgs. 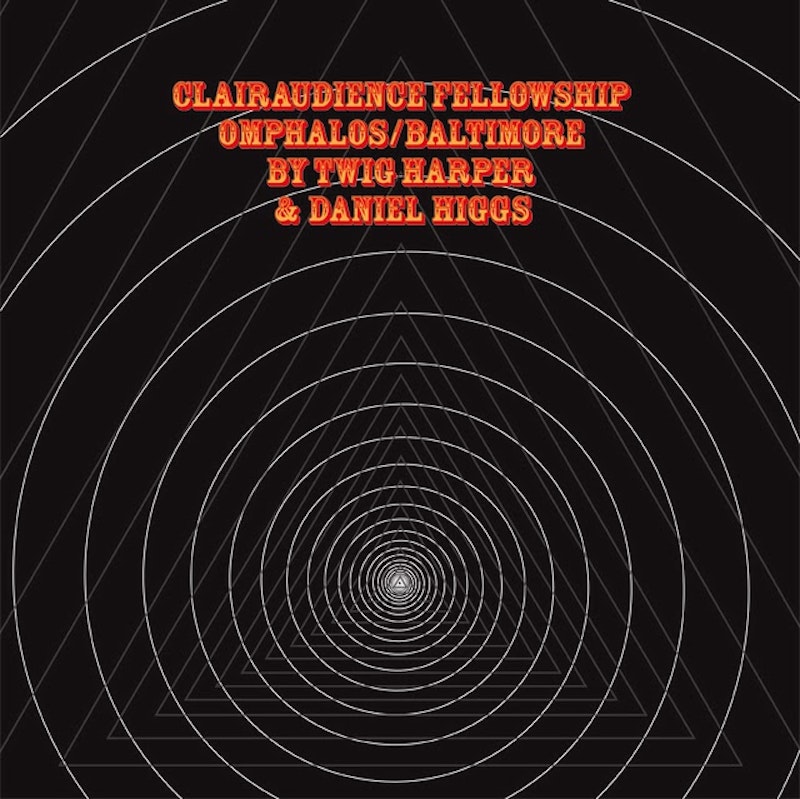 To reiterate and summarize: Harper’s wheelhouse is prismatic, kalideoscopic scree, while Higgs’ specialty is thousand-yard-blare and lapidary spoken-word. So it’s a relief that this duo’s disparate approaches to sound gel so nicely and neatly on Clairaudience Fellowship, their first collaborative recording. Over the album’s seven tracks, Harper’s splattering sonic goulash flavors Higgs’ becalmed, meditation-cassette-speaker’s discourse without overwhelming it; themes touched upon include the particularities of consciousness, the nature of God, selfhood, and the cosmos itself. Hallucinogenic and expertly calibrated, Fellowship carves out its own pocket dimension, a possibility-pregnant otherverse where Higgs is a shaman spouting moebius-strip aphorisms and affirmations with an intimacy as startling as it is empathetic (“like a gnashing tusk, stirring the universe,” “you are navigable space, and you are the navigation of space,“ “she who is the personification of one‘s who ocean of existence / she who is victory“) while Harper paints seething backdrops of broken hand-bells tolling, electronic wasp swarms, clashing sword blades, short-circuit noise bursts, and pools of quicksand that Higgs sometimes tumbles into. In a late August/early September email interview, Harper held forth on Clairaudience Fellowship, the return of Nautical Almanac and the risks of participating in experimental pharmaceutical tests.

SPLICE TODAY: I think that when Clairaudience Fellowship was first announced, the collective mind of every underground music fan on the Eastern Seaboard kind of exploded. You and Daniel working together feels monumental, and unsurprising at the same time, since there are a lot of similarities in the music you've created separately. How did this collaboration come about?

TWIG HARPER: This fellowship was birthed from us by previous clear seeing moments of non-local events. These events appeared to us from other points in time and firmly whacked us across the head. We embraced that these manifestations were our future selves channeling a solid membrane of experience through us and out into the world. It was completely natural and unsurprising; it’s always been under the surface and known but not spoken about. We had to wait for the correct time, methods and outlet.

ST: Where and when was Clairaudience Fellowship recorded?

TH: We started the recording here at Tarantula Hill in fall of [2009] and finshed up the last of it days before 2010, aka ZOLO. ZOLO was predicted to be a big year for life-changing events on the planet and [in terms of] the dynamics of what it means to be alive and climbing the ladder of knowledge. So we kept the transmissions on this side of this calendar clock, knowing it would manifest and multiply one’s perception of ZOLO in ZOLO.

ST: What is a "clairaudience fellowship," exactly? I'm sort of extrapolating "clairvoyance" from that title, as in maybe a mass harmonic convergent awareness of things to come. Am I on or near the mark?

TH: To gain speculation on the nature and quality of the "things to come" or "the things as they really are," we must use our natural-born spiritual technology. To gain clear hearing, one must follow the path leading to the connective core, then a foundation is built off of this meta-personal state. But this clear hearing is not so easy to attain; the halls echo mirror music, calling you away with offers for lower heavens appearing as gifts for the self. All I can say is to accept nothing and spend your time cleaning the mirrors to be clear for clear hearing, so when a sound reflection appears, you know it is not your own. This fellowship is open to all; it is built from behind the mirror and shoots a clear path with an open door. This is my interaction with these recordings, and my awareness with the process. It is up to the individuated consciousness to acknowledge this unique experience and let it live in the body, however it may manifest.

ST: One of the great things about this project is that it's true to both of you; oftentimes when people work together, their individuality is sacrificed or buried, but here your perspective came across on a sheer sonic level while Daniel's came through vocally. What equipment and techniques did you use?

TH: Our techniques are similar in that we use our bodies as the channel for spontaneous creation. The technological trick was to figure out the correct collaborative manifestation. At times, we used Daniel’s words as a foundation of a pre-existing transcribed events. Then to have the word foundation give birth to the meaning behind the words and pull these meanings further down pathways by the oozing sonic magic. Then we also did this the other way around, starting from the haze of non-linear recording/processing techniques, which is my specialty. So it was natural fit; it came quickly and effortlessly, and each movement seemed to reveal wide new possibilities. Even after the whole thing was mixed, I kept hearing each piece in my mind as clear as if I were listening to it. I had a few dreams where I was interacting with each piece as a living organism.

ST: When we talked last fall, you spoke at some length about the impending return of Nautical Almanac. How close is that to becoming a reality?

TH: In the spring we did a two and a half week tour of the Midwest/Northeast with Weyes Blood; it’s going amazing. Carly and I have found a perfect balance between sound and visual portals. On that tour, there were some nights where the room was flattened, and everyone could just feel the connective glue slipping and pulling at the mass mind. Had been planning to do this tour in a few weeks with Daniel Higgs on the West Coast; unfortunately, we had to cancel it this morning. Everyone is bummed out; Nautical hasn't played the West Coast in like seven years, and the energy was super up up up. Then it all came to a crashing halt.

TH: I can only speak for myself in this situation. The web of connections of "why our tour is not happening" is complex and sending a beacon attaching it to any one action through a single person is pointless. So all I can explain is my situation. I had been volunteering at a Johns Hopkins psychopharmacology/states of consciousness/entheogenic study involving me smoking vaporized Salvinorin A. Now, Salvinorin A at high doses is not even a drug, it’s a portal to a dimension better described in the terms of quantum mechanics/string theory. So I was going out to the furthest reaches of my comprehension and bringing it back into my body. The thing is the dangers of sneaking into heaven or the dangers of these types of substances is that if/when the gate opens to heaven, dark forces appear. In a good entheogenic experience, you deal with it in the journey and gain clarity that this darkness is where you need to do the work. But in my experience with the vaporized Salvinorin A being such a quick ride, these dark forces were unleashed and the dynamic had to play out on Earth. So without going into too much interpersonal dynamic details, the last session I did was one of the more bizarre ones. Entities from the dimension shot a package of information wrapped in a test and the ball was in my court. I did the best I could. For the week after this session, my mind was not fully back; they held a piece of it. It was difficult. I was still resonating tripping for a week, trying to unlock this code test. After that week, I was able to make contact with my lost part through dream work and negotiated with it. I was very happy and felt as I was in the clear. That evening, at the same time, Daniel sends an email saying that he cannot go on the tour; it’s all related and complex, he has stepped out. Dark forces have inserted themselves, and are demanding to be heard; I am listening with openness and honesty.

ST: Good to hear that you came through all of that okay. How are you feeling now?

TH: Well, that’s the inner work and that’s actually easy for me to unravel and put everything into place. There is a whole set of related outer human drama which is filled with the lowest forms of human actions. Its a real bummer, but this is the landscape we have chosen to walk down.

ST: What reaction did you receive the first time that you and Daniel played Clairaudience Fellowship for someone else?