All Eyes On Me

Resurrecting dead musical legends and having them perform via hologram is as creepy as it is cool. 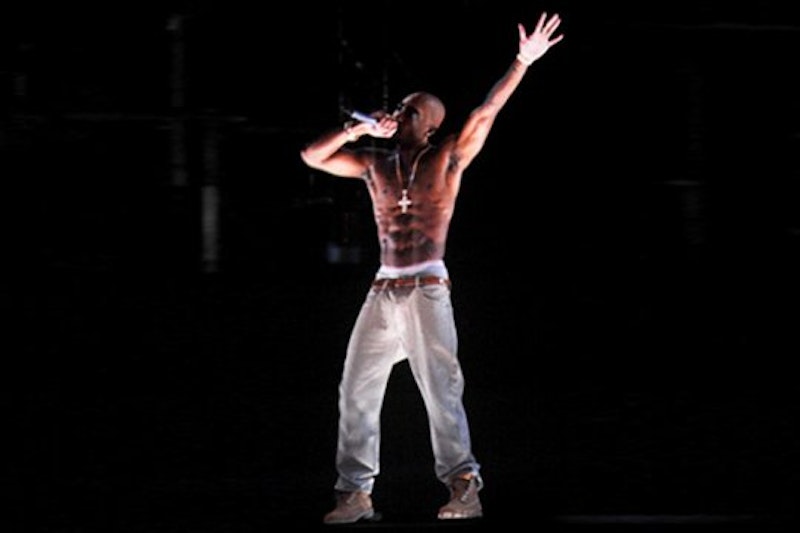 In the world of live music, there are few things harder to watch than a tribute band. They play recognizable songs, configure their outfits, hairdos, and even vocals and playing styles to come as close to replicating the artists they've chosen to honor with their performance, but even the most convincing imitators never come close. That is, until technology came around.

Last weekend at the Coachella music festival, hundreds of onlookers felt their breath catch in their throats as the late hip hop icon Tupac Shakur rose from the dead on stage. He slowly raised his bowed head, looked back and forth at the crowd, raised his arms in a Christ-like pose, and then spoke. Walking across the stage, he addressed the crowd, called out to his former contemporaries Dr. Dre and Snoop Dogg, then launched straight into a performance of "Hail Mary," the last single the rapper recorded when he was alive.

Despite the "Tupac Lives" rumors that have occasionally arisen, often jokingly, in scattered pop culture references since his death in 1996, there was no divine presence on that stage in Indio, California. The Tupac resurrection was the product of a collaboration between James Cameron's animation company Digital Domain, and two hologram-imaging companies, AV Concepts and Musion Systems. The Tupac hologram took this team about four months to create, poring through video footage, audio files, and photographs to capture every single detail of the fallen icon, his body tone, his tattoos, the tone of his voice, and his mannerisms on stage. And they nailed it.

The footage of the hologram performance is both awe-inspiring and eerie. What's most disturbing about the five-minute bit is that spectators weren't meant to believe that this was some imitator or a 3D rendition of archived video footage; this was an original performance from an artist who had been dead for 16 years and viewers were asked to temporarily suspend their disbelief and envision the illusory return of a rap superstar for a surprise set. His spitfire lyrics blasted from the speakers and he moved across the stage, mike in hand, bending, swaying, and throwing his hands in the air as if nothing had changed since '96. It was a moment of ecstatic nostalgia for many, especially when Pac 2.0 was joined by the flesh-and-blood Snoop Dogg for their surreal closing rendition of "2 of Amerikaz Most Wanted," a track they had recorded together a generation ago in the golden age of California gangsta rap.

Their duet was like a violent, profane version of Casper the Friendly Ghost. Snoop addressed Tupac as if he were really there. They gestured toward each other, mimicked each other's movements, and swapped verses seamlessly for a brief but poignant moment onstage before Snoop exited left and the hologram raised one final hand to the crowd, bowed his head, and slowly faded away to nothingness to the sounds of the haunting, heavenly piano and choral music that ushered him to life.

This part of the performance, while energetic, seemed shadowed by a deep, nostalgic sadness, ironically encapsulated by Snoop Dogg's childish grin throughout the final two minutes. Maybe he was marveling at the technology or the thought of doing something he knew was going to make headlines, but as he spit out those old verses and rhymes, he seemed to separate himself from reality and return to his youth. His music had contributed to a new era in hip hop, and he had seen that creation evolve over two decades, so one wonders how he felt walking onstage and embracing a future technology to step back to the past.

This performance could stand as an iconic moment in recent hip hop history, but time will tell what kind of legacy it leaves. It certainly wasn't the first holographic performance in music history. The cartoon rap-rock group Gorillaz performed via hologram at the 2005 MTV Europe Awards and there was that dull duet between Celine Dion and Elvis Presley on American Idol in 2007, but unlike these one-hit spectacles, the idea of holographic live performances seems to be gaining traction following the Tupac show.

Snoop Dogg and Dr. Dre, who envisioned this idea, have allegedly begun planning logistics for a tour with the virtual Tupac after gaining the approval from the deceased artist's mother, Afeni Shakur, leading many to speculate how far this phenomenon will go. The music industry is likely licking its chops at the prospects of being able to promote a Beatles reunion or a Woodstock revival with the original cast. I'm sure an organization such as AIDS United could benefit from a headlining performance by Freddie Mercury. The Tupac hologram reportedly cost over $100,000, but once that sort of technology becomes more affordable, live performances from former icons could become a cash cow for the industry. But what will this mean for the legacy of musicians?

All legitimate artists do what they do to create an impact on their audience and elicit emotion. The ultimate goal, it seems, would be to create something (a novel, an album, a film) so resonating that it lasted long after the artist had passed away. Writers write so that their stories and ideas will sit on shelves and be read years after they are gone. Actors and directors create cinematic moments that get re-watched, replayed on highlight reels, even recited by fans long after their release. Musicians make the music that consumes our daily lives. No matter how important music may be to an individual, there's a good chance that there is at least one song that instantly brings him or her back to a specific period of time in his or her life, whether it's dancing at the prom to "Mambo No. 5" or listening to Kurt Cobain's live acoustic "Where Did You Sleep Last Night?" on repeat following his death in 1994. Whether we pick the songs or not, our lives have a soundtrack.

Artists intend to ingrain their works in the lives of their audiences, whether they state this openly or not. They take some part of themselves and put it into a tangible form to represent their idea and contribution. When you think about Radiohead, your mind probably doesn't go straight to mental pictures of Thom Yorke or Jonny Greenwood. You think about OK Computer or Kid A and how you felt the first time you heard them. Or maybe you think about a time you saw them play live and it blew your mind. Either way, those are both works of art by the artist. What a holo-performance does is take that work of art, re-package it, and sell it. In a sense, it's a form of grave robbing, except they're not taking albums and re-releasing them, they're re-releasing actual artists. Technology did enough damage to pop music with the invention of the auto-tuner. This crosses the line.

Taken alone, the Tupac hologram performance is still an exciting and emotionally resonating moment in live music. It was undeniably cool too see a digital reenactment of Tupac perform live with actual musicians and the level of detail in this re-creation was hauntingly breathtaking, but I hope this moment will be a one-hit wonder rather than a new trend.

Kurt Cobain chose to stop playing music when he shot himself. He doesn't want to come back.