She may not be totally sane, but she has a voice to die for. 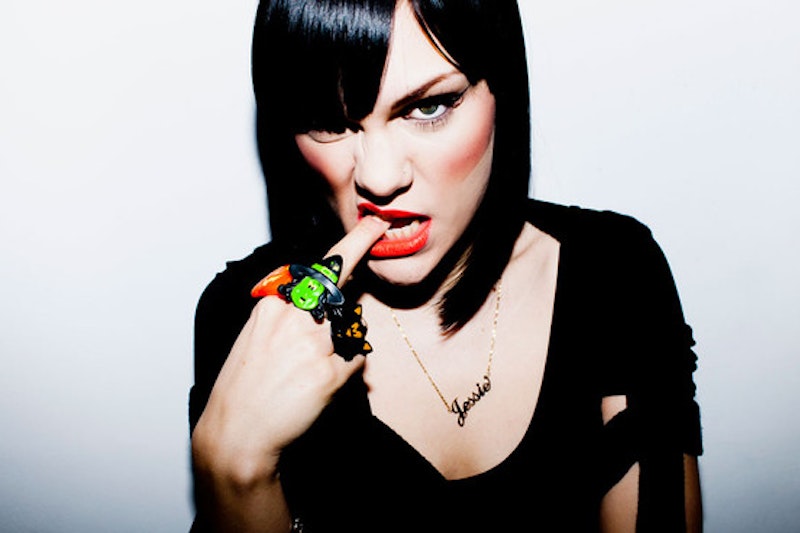 Lately I’ve been fascinated by the emotional R&B stylings of British song slayer and “Party in the U.S.A.” writer Jessie J, née a much more bland sounding Jessica Ellen Cornish. The first thing you’ll notice about Jessie J is that, well, she’s a little over the top. She’s like if Katy Perry, Joss Stone, and T-Boz from TLC had a baby, if that baby was blessed with unnaturally black, perfectly razed bangs and an assortment of neon press-on nails. Miss. J if you’re nasty is extensively stylized and her fresh look feels like a marriage between the glamour of old Hollywood and the edge of hip-hop. I’m sure looking like a tough bitch does nothing to alleviate the rampant lesbian rumors, but the fact is that underneath those clip-on bangs and behind those door knocker earrings is where she keeps all of that vocal voltage.

“Nobody’s Perfect” best displays Jessie’s range, but you don’t get the full effect unless you watch her perform it live. I’ve been playing this YouTube clip of her doing a slow-ended version of the song with nothing but a guitar, and it gives me chills to see how viciously she slays it. Wearing her requisite clip-on bangs she starts off low, an intense whisper. As the song builds towards the climax of the chorus she pulls back from the microphone and unleashes the wrath of her voice. The sound is simultaneously aggressive and smooth, charged yet buttery, playful yet unflinching, shaky and controlled. There are no wrong notes. It’s hard to place the style because there are elements of soul and R&B, and at several points you feel like this white girl is rapping at you. But that’s what makes her stand out vocally: the intensity, strangeness, and twang of her vibrato.

It’s fascinating to watch singers create music in the middle of a live performance because, with a good singer anyway, you can see how the song grabs hold of the performer emotionally; the singer’s job is to exorcise the music out. It is not a singing just to sing—it is a singing out of need, as if to say there is this thing inside me that I have to get out. I suppose that what makes a good singer a good singer is the sense of urgency with which a song is sung. In the clip above I love hearing her sing, but I also love watching the theatrics of her body. She is barely able to contain herself as she sings. At more than one juncture in the song her body shakes, or she angrily rips off her headphones, or she points up to hit a high note or she wiggles her fingers as a way to facilitate the vibrato. These nervous tics are, for me, just as interesting as the tone and quality of the notes sung because they reveal a kind of presence. They are moments of the transfer of energy, of intensity. To captivate an audience is to claim an entire space that simply, and boringly, returns back to normal at the end of the performance. You spend time watching a performer, being sucked into their presence and then all of a sudden: it’s over. Where does all this power come from?

I’ve often wondered why there aren’t more amazing voices like hers on the radio. Some say that pop music is not necessarily meant for great voices, that the popocracy is just a capitalist machine where the performers themselves are completely interchangeable. But there was a moment in pop music—Whitney, Mariah, Christina—where the big voice was in. These kinds of voices only come around once in a while, and for my generation that’s Jennifer Hudson, Elise Testone from American Idol (I SAID IT!), Beyoncé, Adele, Christina Aguilera, Amy Winehouse and now Jessie J. It’s funny, then, that in watching The Voice this week, where an exasperated and still perplexingly blonde Christina Aguilera could barely walk in her stilettos, let alone sing her own song, I realized that Jessie J fills the shoes on the pop charts that Christina would have if she ever got it together. Though her debut album Who You Are is only so-so, with “Nobody’s Perfect” being the best track, I’m hopeful that her second coming will take things to the next level.