A review of the noise-smith's A Foxhole Point of View cassette, out now on Hospital Productions. 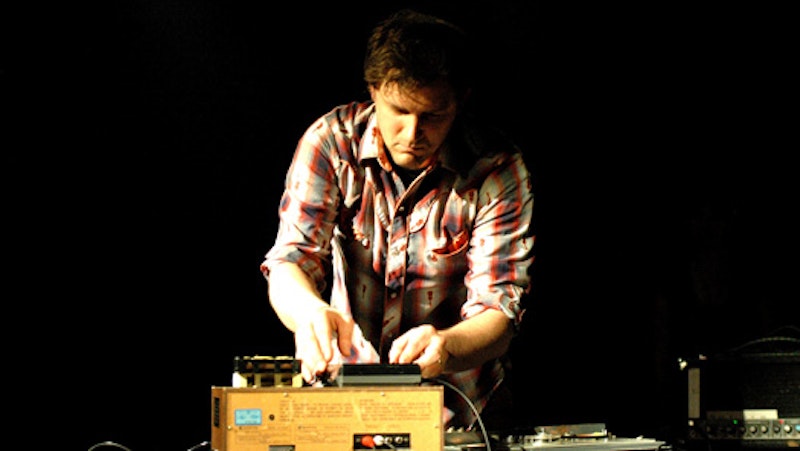 Nature abhors a vacuum. A vacuum demands matter. The perception of matter precludes the assignment of a value system. Systems collapse, inevitably, into anarchy and noise. Noise music is war. War is hell.

And when I think of war, my mind drifts to a Bush II-era episode of Larry King Live where ol’ Lar, nearing the end of his scheduled airtime, exclaimed “I leave you now, with images of waaaaaaaaar,” as if ushering us to some fantastically splendiferous Disneyland attraction when he was actually introducing grainy footage of shit blowing up on Iraqi or Afghani soil. To a circa 1988 Doonesbury satire of Al Gore, where the Senator was depicted as a Vietnam grunt with a “War is Heck” sticker affixed to his helmet. To the magnet war ribbons—available in all the colors of the rainbow—that not so long ago festooned every SUV you’d find yourself stuck behind in urban traffic. To Snoopy heroically piloting his bullet-riddled doghouse home from an airborne shootout with the Red Barron.

A Foxhole Point of View (Hospital) isn’t so much Aaron Dilloway’s noise-music position paper on armed conflicts as it is his audio-collage take on a blood ’n’ guts war flick; consider Foxhole his dingy, pomo Inglourious Basterds, a sturm und drang echo-chamber where slurred, slippery, skipping (and strategically chosen) samples Tourettes bark at one another during earth-scorching mortar assaults. As usual, he wears his capital-L literalism on his sleeve: the tape opens with the clipped, hair-raising trill of a bugle player laying into a “charge” motif. Dilloway loops and contorts these incendiary notes until they’re bent and dinged cousins to the horns he massacred on Chain Shot (Hanson), and concludes with a scratchy, needle-on-turntable rendition of “Taps.”

But in between those two points, he’s knee-deep into a sense-saturating simulation of what it probably feels like to be fighting for your life in a real ground war—budda budda budda gunfire, artillery shell blasts, bombs whistling down from on high, vocal fragments sloshing through the melee— that incrementally sheds its fractal façade to reveal a spastic groove logic. And while there are significant subsequent shifts in Foxhole’s noise core—the stereophonic space expands to mushroom-cloud width, contracts to crushed-limb close-quarters, drunk-skates the spectrum like Hosoi board scraping a backyard pool with no wheels on its trucks—the underlying intrigue lies in the voices Dilloway imports and buries in ignited-napalm, no-man‘s-land distortion. Merciless drill sergeants bark orders reminiscent of Native American chants, which Dilloway dutifully explodes. “Captain, you had your motherfucking Boston Tea Party, why can‘t we have our riots?” wonders a blaxploitation militant, rhetorically. Television newsmagazine readers drone in full ham mode; expect Dominick Fernow or Richard Ramirez to nick that systematically masticated “the loving terror of another attack in the night” sample for one or another of their serial killer-inspired projects.

“Reality explodes all around you,” a stentorian speaker remarks, and remarks, and remarks, and remarks yet again, as a crowd. Grunts? Holocaust victims? Rock concert attendees? It’s impossible to say, really; shrieks in terror, horror, or outright ecstasy. Ultimately, Foxhole has a commentary, conversation-piece feel. It isn’t the sort of noise album you surrender to or loose yourself within, where it’s up to you, as the listener, to assign values to extreme modulations in pitch, intensity, and pique, lending a idiosyncratic, personal meaning to the whole. Coherent but not pedantic, Foxhole is Fredrick Wiseman on acid: a documentary soundtrack without an art-house movie to call home.